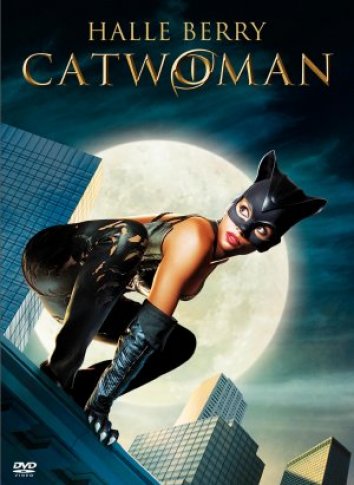 I’m ready for the first movie of February. I do have a theme for this month and I’ve got 9 movies picked out ready to go for it. Plus three extras movies because they’re new. So to start things off I’m watching the movie which may or may not be the worst movie of the month, you’ll just have to wait to find that part out for sure. It’s the 2004 comedy Catwoman. I’m sorry it’s not technically labelled as a comedy but there were a lot more laugh out loud moments in this movie than there were in Super or Kick-Ass. The only problem is that the moments in this movie were meant to be taken seriously.

I vaguely remember the advertising and buzz for this movie when it was first coming out. I believe they were building on the buzz of Halle Berry’s role as Jinx in the Pierce Brosnan Bond movie which to this day is still the only Bond movie that I’ve ever seen. Not sure what that says about my movie preferences. Instead of doing a spinoff movie of the Jinx character the powers that be in Hollywood decided to create this movie which was supposed to create a new franchise. Apologies if this entire paragraph is a load of crap, it’s all stemming from my flawed memories instead of doing a little bit of typing and actually looking it up. I find it to make things more interesting that way. 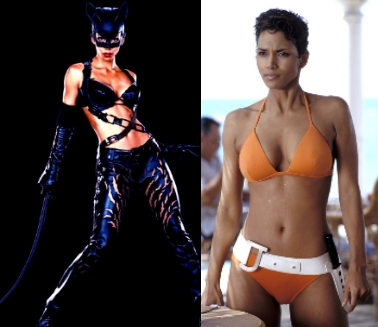 Anyway, this movie was a chance for Halle Berry to have a starring role and to spin off Catwoman into her own movie franchise if it was successful. Long story short, it was not successful. They reworked the origin, outfit, and pretty much everything that made Catwoman Catwoman. Instead of being a slightly more criminal foil to Batman, in this movie she was chosen to be another in a long line of Catwomen by an Egyptian cat that tests her by seeing if she’ll climb out onto a ledge from a high rise apartment building to “rescue” the cat. And of course during that she is saved by a conveniently passing cop who thinks she is a jumper and of course they immediately like each other. She also conveniently overhears a diabolical secret of the cosmetics company that the new line of beauty cream they are getting ready to launch makes people sick, addicted, and ruins their face if they stop using it. She is then killed and conveniently resurrected by the same Egyptian cat and all of his cat friends. This gives her cat powers like being able to see and hear better, and she gets all the catlike traits of batting at quick moving objects, sleeping on high ledges, loving catnip, hissing at dogs, the list goes on and on. Pretty much every cat trait you can think of, Halle Berry does at some point during this movie. And it’s funny less than half of the time.

What’s more funny is the even worse cliched one-liners that she spouts during any of the so called action sequences. They usually amount to her running around the walls like a cat using the early CGI actor replacement which turns her into a shiny videogame-esque character that they try to hide with fast moving cameras and quick cuts. There’s even the bad bait and switch plot which is ruined because they show Sharon Stone talking about the harmful effects of the cream at the beginning, then set up the whole fact that she is playing Catwoman into her own plans which feels like it’s supposed to be a surprise for the audience, but the audience already knows that Sharon Stone is in on it the entire time. And because Catwoman wouldn’t be a real hero unless she was facing off against someone else who is superhuman in some way, they throw in the fact that Sharon Stone has been using the cream so much that her skin is as strong as marble and she feels no pain anymore… yes really. So it’s a magic cream that gets rid of wrinkles, gives people headaches, makes them addicted, destroys their skin if they stop using it, but makes their skin rock hard yet still beautiful if used over the course of years. Riiiiight.

There’s also the whole split personality that is explained as a side effect of the whole Catwoman origin process. Instead of being a shy, mousy, frumpy woman, she becomes a confident, independent, sexy woman. In the early part of the movie she seems not in control of this, mouthing off to her boss then immediately wanting to take back what she said. And later she seems to be more in control of it by embracing it fully while she’s wearing her Catwoman outfit yet still using it sparingly during the rest of her life. The costume is equal parts ridiculous as well, with a cat-eared mask that makes it look like she has a giant head, to the S&M inspired leather bra, shredded pants, and a whip. They even use an early moment to “explain” the whip where she rips off a beer tap and uses it for a whip then has the “aha” moment. You can almost see the lightbulb going off above her head during this scene. I skipped over this, but there’s plenty of these lightbulb moments early on like when she discovers her newfound agility by… being good at basketball. 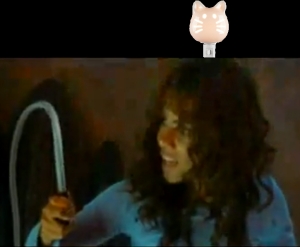 There’s just not enough words to go through how many places this movie just fails to hit the mark. It’s cliche after cliche, from the bad costume to the bad villain, to the bad love story, to the bad dialog, to the bad funny sidekick in Alex Borstein. I enjoyed watching this movie only because I found it hilariously bad. Pretty much any time Halle Berry opened her mouth during a fight scene, it made me laugh. And I knew it was going to happen from the beginning, but Jena loved this movie. She loved all the cats in the movie and constantly asked if Halle Berry was turning into a cat. Although I suspect that on some level she liked the movie’s awfulness the same way we did. There were several moments when she started laughing at scenes that were just bad instead of funny . Stay tuned for Sunday when I watch Spawn as my second movie for the easiest “can you guess the theme” for February. Until next time, this has been Bubbawheat for Flights, Tights, and Movie Nights.