Welcome to another edition of Follow Friday where each week I feature and interview a fellow blogger and follow their suggestion to another blog to feature next week. I prefer this over a blogroll because it gives each blog their own time to shine, plus I personally rarely click on blogrolls so why would I expect you to? Not only that, but I get the chance to check out some great blogs I might not have found otherwise found, talk to some great people, and share the conversation with you. Of course, if you would rather see something like a blogroll, I have collected all of my previous Follow Friday sites in list form which you can find right at the top of the page. This week I was directed by Scott over at Front Room Cinema to check out The Velvet Café. But since she was on vacation last week, I held it over and am featuring it this week. 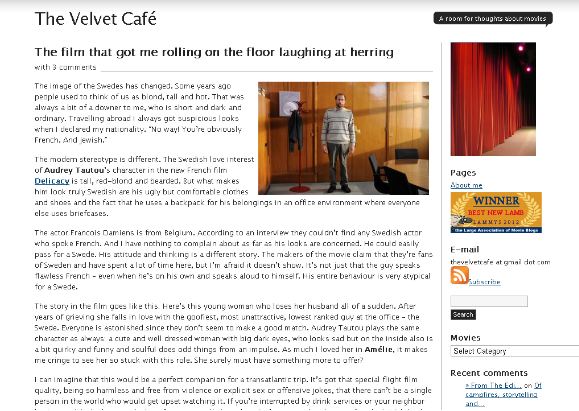 One thing that I’ve always liked about the Velvet Café is that whenever I go to the site, it feels very personal. Some blogs offer just movie reviews, or reviews and other content, but I tend to enjoy blogs a lot more when they’re not just about movies, but about the person themselves. I have to admit, that there’s not a whole lot of films over there that I recognize, until I get to the more popular movies like the Amazing Spider-Man, and Jessica is with me that it’s not really a bad thing that there’s a new version of Spider-Man already. So let’s hear from Jessica herself.

Bubbawheat: First off, I do have to mention that I have seen several different places that you’re not exactly the biggest fan of superhero movies, yet there’s been a few this year that seem to have caught your attention, and your approval. Do you think it’s because superhero films are being made with a higher quality of storytelling in mind, or do you think movies like Chronicle and the Avengers just happened to click with you this time?

Jessica Elgenstierna: I’ve noticed this too, that for being someone who claims that she doesn’t like superhero movies, there have been an awful lot of superhero movies this year which I’ve liked. I’m honestly not sure of the reason. Maybe I’ve just been better at selecting the ones that are more to my taste.

Chronicle had an interesting psychological dimension to it and a build-up that made me care about the characters. The Avengers was surprisingly funny. I loved the human side of The Amazing Spiderman and I have nothing but high hopes for The Dark Knight Rising, which I have yet to see.

It’s probably about time that I revise the statement that I don’t like superhero movies. I like them as long as they offer what other movies offer: interesting characters, storylines and environments. Just showing off various abilities, like I’ve seen in some (bad) superhero-movies isn’t enough to tickle my interest.

BW: There have been a whole lot of pretty shallow superhero movies in the past. They’ve really stepped up their game in the past few years. On the other hand, you often celebrate the more low key independent or foreign films, what is it about those kind of films that appeal to you?

JE: I love movies that change me in some way. Movies that make me think, movies that surprise me, movies that make me see the world in a slightly new way, movies that will remain with me for a long while, while I let them sink in. I think I get this more often from films that are made outside of the regular Hollywood machinery, which often tries to cater to the lowest common denominator, and therefore risk to become bland and full of clichés. This said: it’s not one thing or the other to me. I want a mixed diet of movies and I can really enjoy big budget spectacles as well. The Avengers and Prometheus are both among my top movies of 2012.

BW: I can totally agree with that. Do you have a favorite genre of movies?

BW: I’m rather fond of sci-fi movies as well, as well as fantasy. What was the biggest thing that you missed while you were on vacation last week, and where did you go?

JE: I’ve been out hiking in the mountains for a week, but to be honest it didn’t feel as if I missed very much at all. I had fresh air to breathe, water in the creeks to drink, food that tasted so much better than at home since I actually was hungry after all the walking, and constantly surrounded by a landscape more beautiful than any 3D CGI effect you ever could imagine.

I didn’t watch any movies during this time and I was also completely disconnected from blogs, twitter and other commentary about movies, but to be honest, I think it’s good to have a little break from this every now and then. It felt good to have a real shower though when I got home. I started to get very smelly. 🙂

BW: I bet, I’d love to take a real nature-centric vacation again. I haven’t been hiking since I was a kid. You have a pretty even mix of reviews as well as general movies discussion, which do you prefer writing?

JE: The reviews are the bread and butter of my blog and I couldn’t be without them. They’re one of the reasons why the blog exists in the first place, as a way for me to remember the movies better than I would otherwise. But I can’t deny that the general musings often are the ones that spark most discussions and that brings me most pleasure to write. It’s just a bit tricky to come up with good topics to muse over. I can’t do it every day, but I try to keep my Friday night posts as non-reviews.

BW: Could you tell me about your most memorable time in cinema?

JE: The less you hear from a theatre audience, the better. That’s a view I think most of us movie goers hold most of the time. When you’re in a cinema you don’t want to hear other people commenting, munching, cheering, crunching, whispering, messing around with their clothes and bags or tapping their cell phones. Basically we pretend they’re not there at all.

But there are exceptions. There was one time when I found myself in a salon filled to the last spot with the noisiest audience I’ve ever been in. And I enjoyed every second of it.

This happened to me in the beginning of the 80s when I spent a few summer weeks in Brighton attending a language course. One of the theatres showed Quadrophenia, and as a fan of The Who I took the chance to watch it. What I didn’t know was that there was a big mods meet-up in the city going on at the same time. This meant that the theatre was filled to the last spot with fans far more dedicated than I was, and while I don’t think it was announced as one, the screening turned into a huge sing-a-long event. Every line that was uttered or sang was accompanied by a huge choir.

I haven’t watched the movie since, but I suspect strongly that the experience of it alone at home in front of a TV screen would be far less engaging than the one I had in Brighton. Not every movie gets better of being seen in peace and quiet. Some take a big and loud audience to really shine.

BW: That sounds like a pretty epic experience. What is your favorite superhero movie?

JE: I really enjoyed the first two movies in Nolan’s Batman series and hopefully the third one won’t disappoint me either.

BW: And finally, what site do you suggest that I follow next Friday?

JE: I would really like to know more about the guy behind Bonjour Tristesse. He’s focusing very much on his reviews on his blog and doesn’t reveal all that much about himself, so I’m really curious about the person behind the blog. Actually I assumed for a long time that he was a woman since there was no information available that revealed his gender.

Bonjour Tristesse focuses on “foreign, indie and cult cinema”, but this shouldn’t rule out superhero movies. Maybe he can point us to some superhero films we’ve never even heard of before.

I’ve actually recently come across a couple different foreign superhero movies that I’ve never heard of before, there’s an old French movie from the 60’s called Mr. Freedom, and I also thought Bonjour Tristesse sounded very feminine. Thanks so much for your time, and squeezing this interview between vacations, I’m quite jealous. And I’m looking forward to hearing from Bonjour Tristesse next week. Until next time, this has been Bubbawheat for Flights, Tights, and Movie Nights.