← What ifs! You could make a sequel to any movie?
Condorman →

Scooby-Doo Mask of the Blue Falcon

I will easily admit to being a Scooby-Doo fan when I was younger. I watched many episodes of the Scooby-Doo and Scrappy-Doo as well as A Pup Named Scooby-Doo, alongside the older episodes. They were goofy, silly, campy, and fun, but I enjoyed them. I also watched plenty of other Hanna Barbera properties back when Cartoon Network was new and filled most of its programming slots with classic cartoons and only a handful of fresh ones. Among them was of course Blue Falcon and Dynomutt either in their own show or one of the many Hanna-Barbera mashups like the Laff-a-Lympics. Scooby-Doo has never really seemed to completely go away, there’s always some new TV show or an endless stream of straight-to-home-video movies like this one. But many of the newest episodes and movies have had a lot sharper sense of humor while still retaining some of the goofiness and campiness the classic fans love. This one is no exception, there’s a lot of smart humor alongside the typical slapstick antics of Mystery Inc. It feels like it’s been ages since I’ve seen an episode or movie about Scooby-Doo, probably not since the live action movie, but I really enjoyed this movie, especially because of all the little background references and such.

The basic plot isn’t much different from a typical Scooby-Doo plot. There’s a mystery with a monstrous villain causing havoc at a comic book convention. Although since it’s Hanna-Barbera and not Marvel/DC (even though it’s produced by Warner Premier who also does the DC animation movies) all of the background characters and cosplay costumes are of classic Hanna-Barbera characters, and it’s so much fun to spot all the lesser known properties like the Impossibles, the Herculoids, and the Wonder Twins alongside mainstays like the Flintstones, the Jetsons, and Space Ghost. On top of that, they also homage the Adam West Batman by having the old actor who used to play Blue Falcon be a washed up star making a living selling autographs at these conventions. There’s also a reboot of the property in the works by a flashy female-Michael Bay type director making an edgy and dark version of the character. I also think it’s interesting that the voice actor who plays the new Blue Falcon was Deidrich Bader who did the voice of Batman in one of his several animated shows. I loved a lot of the satire about the Transmogrifier movie titles and the fact that she explains that she was allowed to make a movie where they just blow stuff up without having to worry about a plot.

If you’re a fan of the classic Scooby-Doo mysteries, there’s still plenty of the standard formula here to enjoy. There’s plenty of red herring characters to keep you guessing as to who the real villain is, since nearly everyone has their own possible motivations. There’s also a bit of the classic chase scene, as well as the typical moment where Scooby and Shaggy are trying to avoid waking something up and clumsily toss over a bunch of loose light bulbs which Scooby manages to catch. They also get the chance to play a little bit with the unmasking scene at the beginning of the movie. And of course there’s the scene where Shaggy and Scooby eat an inhuman amount of food. They are all Scooby-Doo mainstays that almost feel like they have to be there for it to be a Scooby movie, though thankfully they don’t linger on any of them. 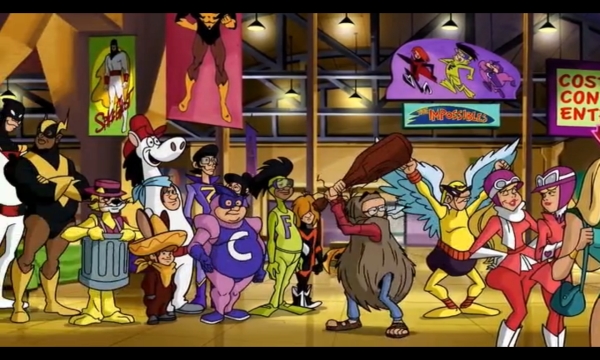 Just a small sampling of some of the background cosplay characters in this movie.

The animation is pretty standard, it’s pretty comparable to the typical DC animated movies, and of course there’s the absolute ton of background touches. Every scene in the convention has posters and cosplay attendees in the background of nearly every Hanna-Barbera character imaginable. Including the ones I already mentioned, there’s also Atom Ant, Speed Buggy, Frankenstein Jr., Hong Kong Phooey, Harvey Birdman, Josie and the Pussycats, Magilla Gorilla, Top Cat, and several more. The general scenes about the comic book convention were pretty fun as well, with Daphne having an obsession with beanie baby-like collectibles, Fred is excited about the new Blue Falcon movie, and surprisingly enough it’s Velma who’s completely uninterested in the geek-fest.

It feels like it’s been a long while since I’ve seen a Scooby-Doo cartoon, but watching this immediately brought back memories of the classic cartoons, but with a lot more intelligent jokes mixed in with the classic camp. There is a whole lot to like in this movie both for adult fans of the original cartoons as well as kids who are used to a quicker pace and better animation. For her part, Jena really enjoyed the movie and sat through it twice. The first time with just me and her, and the second time because my wife wanted to see it as well. It’s also pretty short running just over an hour long. If you have kids, or are a fan of comic books and classic Hanna-Barbera cartoons, it’s worth a watch. It was a total nostalgia fest for me, but it was also an enjoyable little movie on top of all that as well. Until next time, this has been Bubbawheat for Flights, Tights, and Movie Nights.

← What ifs! You could make a sequel to any movie?
Condorman →