For a little while, I’ve actually wanted to allow other people to share their opinions about superhero movies more than just in the comments section. And while I’d rather not post someone’s opinion on a movie that I haven’t seen or reviewed yet because I am still adamant in my quest to watch and review every superhero movie I can find, I thought it would be interesting to get someone else’s opinion on a movie that I’ve already reviewed. I’m sure sometimes it will be quite different, and in some cases it will be very similar. If you’re interested in sharing your opinion on a superhero movie, just let me know, especially if your opinion differs from my own. But today’s opinion comes from someone with similar tastes as me, and I often use him as a good estimation of whether or not I will like a movie more than just the general critic consensus and he’s got plenty of reviews under his belt over at Today I Watched A Movie. 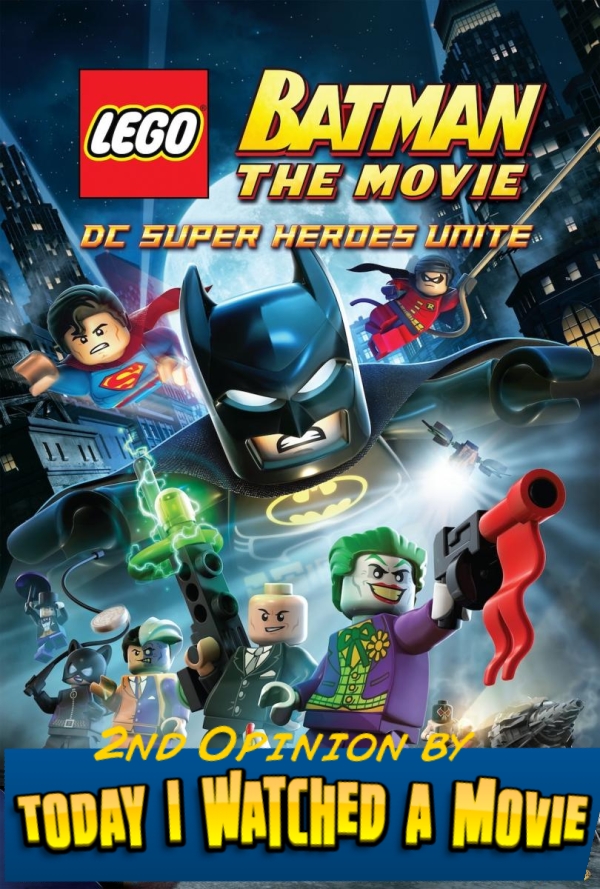 I promised Bubbawheat several months ago that I’d do a guest review for him, and I’m just now getting around to it. In our discussion about which movie I should choose, my original idea was to go for a comic-based movie that he hadn’t done yet, but he suggested that if I offered a second opinion on one he HAD already done, then that’d be much better.

I decided to tackle a DC animated direct-to-video movie, since they’re usually a little too short to be featured on my own website. When I happened across LEGO Batman: The Movie – DC Super Heroes Unite (what a ridiculously complicated title, eh?) at Redbox, I was pretty excited to find out that Bubbawheat had already written about it, because that meant that I would get to write about it, too!

My love for LEGO began way back in elementary school, when I found out my best friend had an entire room of his house dedicated to them. There had to be tens of thousands of them in there. I see people complain all the time about how bad it hurts to step on LEGO, but I’m pretty sure my feet were trained to withstand the pain thanks to all the hours I spent up there, as well as with my own sets at home.

I didn’t get an entire room of my house to use for LEGO, though. I couldn’t even play with them in my own bedroom. Our house had a lot of shag carpeting, and my mom didn’t want any pieces to get lost down in there and sucked up in the vacuum, so every day after school I’d push my giant Rubbermaid boxes filled with LEGO down the hall to the living room to play. Unfortunately, I also had a younger sister who, since the living room was considered fair game for everyone, was free to steal the exact pieces I was looking for to finish my Aquanauts secret base.

As I got older, I stopped playing with them, and I eventually gave them all away. Even so, LEGO still hold a special place in my memory, and they always will. My mom actually gave me a set last Christmas for old times sake because she “missed buying them” for me each year. So now there’s a little LEGO mining truck sitting beside my computer as I type this up.

I have to admit my first reaction to The LEGO Movie that’s coming out soon was a negative one. I thought it sounded pretty stupid…that is, until I saw the trailer. Ever since then, my inner 8-year-old has been jumping up and down in the back seat of my mind yelling, “Is it here yet? Is it here yet?” I’m so glad I get to use my movie review blog as a cover to go see it on opening day.

Anyway, to hold myself over until then, I decided to give this LEGO Batman movie a shot. I have to say, I’m glad I did. Normally I take notes during movies and flesh them out a little afterwards for my reviews on TIWAM, but this movie captivated my attention from beginning to end, and as a result, my text document was still completely empty when the movie ended!

I knew this movie would probably be funny, but I didn’t know I was going to be laughing the whole way through. It had an unexpected silly playfulness to it. Underneath all of the witty dialog and the brick-based sight gags, though, was a pretty smartly written story that showed they had really put some effort into it. I read in Bubbawheat’s review that it’s basically just all of the cutscenes from one of the LEGO Batman video games strung together. I’m not very familiar with the games, but I would have had no idea that’s where this came from if I hadn’t read his review before watching the movie.

All of the characters were played up as stereotypes of themselves. Superman often referred to himself in the third person, usually while bragging about how great he was. Batman tried his best to keep to himself and be serious all the time. Robin, however, was the breakout character for me. The way he constantly tried to act cool, only to be reminded quickly of how dumb everyone else thought he was, completely stole the show.

Probably the best thing about the movie was the way they utilized LEGO in almost everything, from buildings to vehicles, and not always in the way you’d expect it to be. (There was a chandelier near the beginning of the film that was made out of LEGO skeleton arms, for instance.) What I especially loved was the amount of detail that went into it, with many of the bricks having scratches and scuff marks. My only wish is that EVERY building had been made from LEGO, but that’s a minor complaint at best.

Like I mentioned earlier, the length of this movie is partly what kept me from giving it a shot on my own blog. It turned out to be the perfect length that it needed to be, however…even though I did find myself wishing it wouldn’t end.

All in all, it was a silly, fun, nostalgic time, and I’m glad I got the opportunity to talk about it here. Until next time, I’ll turn things back over to Bubbawheat. Thanks for reading, and be sure to follow Flights, Tights and Movie Nights if you don’t already!