The Bad Samaritan Must Die

The Bad Samaritan Must Die 2012

Being a site that focuses on mainly superhero movies to watch and review, there’s not too many opportunities to recieve screeners for movies as most of the films are big tentpole films from major studios who aren’t that worried about the opinion of a small time niche movie critic. But once in a while I’m able to run across a smaller independent film that’s looking for more exposure as is the case with this film. If you’re interested in helping support independent film then make sure you check out the film’s official site at TheBadSamaritan.com where you can read some behind the scenes info, watch a trailer, and even buy the movie for yourself. As for what I thought about the movie? I admit that it took me a little while to warm up to it. But once I did, I enjoyed it for what it was. It’s a look at a vigilante as more of a cult leader, someone who gains a fiercely loyal following during a time when they feel like the best quality in a person is strength. It has some strong ideas, but as is often the case in independent cinema, it does struggle a bit behind the lack of a proper budget. 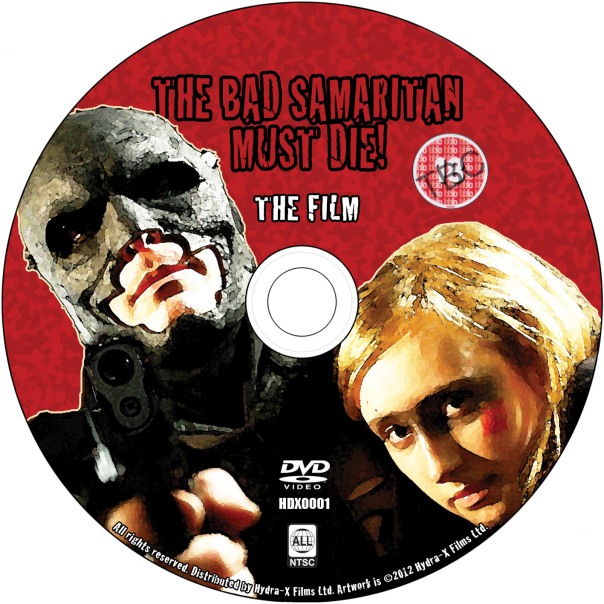 The Bad Samaritan is not about a hero. It’s not really even about a vigilante. There are two main characters that the movie switches back and forth between, as well as a couple different time periods. It’s England in a state of unrest, and the Bad Samaritan comes in, cracks a bunch of heads, actually seems to make a difference, and starts to gain a following. But it’s not just a following of fans that want him to keep doing what he’s doing, instead it’s a following that wants to join him in his violent crusade against the violence. One young girl in particular is a big fan and is only ever really known by her online handle of Orphan. She’s not quite an orphan, but her father is dead, and her mother is a drunken layabout, so she looks to the Bad Samaritan as a pseudo father figure whether or not she realizes it. When he rejects her, she decides that the only recourse is to kill him.

As far as the acting goes, The Bad Samaritan himself is played by one of the writer/directors and he does a fine job throughout the movie. The young actress who plays the Orphan is ok, but she doesn’t have the experience needed to convey some of the more dramatic scenes where she gets very emotional. Much of the film is also shown as news and reality footage, and while the acting in those scenes were quite stiff, they seemed to be intentionally stiff and worked well within the context of those scenes. There’s also the scene with the Bad Samaritan hanging out at the detective’s house which also gives us most of the comedic elements in the movie. 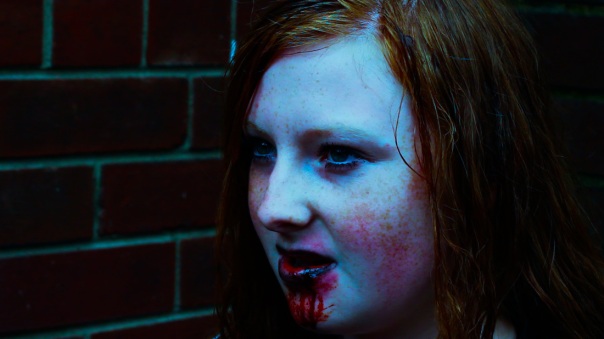 The Orphan, even though she misses out being on the movie poster.

I thought it was sometimes difficult to get a feel for the overall tone of this movie. At times it takes itself quite seriously, but there are also plenty of moments of dark comedy throughout, especially during the scene between the Bad Samaritan and the detective where they are just drinking, smoking, and the detective is wearing a ridiculous naked lady apron. There’s also some darkly funny moments during the action scenes where the Bad Samaritan is taking on a couple kids who are putting up a fair fight, or during the final scene where a hand gets lopped off he basically tells her to stop whining before finishing her off. I also liked the look of the Bad Samaritan with an almost flesh-like black mask attached to his hood with hook-like clasps.

I think what I did like the most about the movie is where it ends up. Even though it takes a little while to get there, which is an odd way to put it because it’s a very short movie overall. But as the Bad Samaritan gains popularity and a following, he holds his own rally filled with other people in masks while he starts spouting his propaganda filled speech filled with promises of strength and justice, promoting the idea of better city if they follow their own rules rather than the rules of the city. He is given a cult leader status, culminating in the full indoctrination of one of the youngest members of the meeting when things go wrong and some violence breaks out. I won’t spoil exactly what happens, but I think it ends in the most appropriate way possible. It’s something that is fun to watch, and while I don’t generally talk about the special features as I often watch movies digitally, there is an interesting behind the scenes video as well as a couple earlier short films that are all quite entertaining to watch. If you’re a fan of B movies, or if you would like to support more independent movies, you could do a lot worse than to support this one. Until next time, this has been Bubbawheat for Flights, Tights, and Movie Nights.