Part of finishing off this list of 100 essential superhero movies is bringing in my audience, and so when I got down to the last 20 movies, I decided that I would let you decide. And what better way than to reach out to other movie critics and reviewers to let them argue the case for a superhero movie that they are a fan of and at the bottom of the post, there is a poll where you can vote whether or not you agree if it should be included in the 100 Essential Superhero Movies list. Today my guest is The Vern from The Vern’s Video Vortex who is taking a look at one of the increasingly few superhero movies I have yet to see for myself, Orgazmo. And to check out his full review of this movie visit his site. 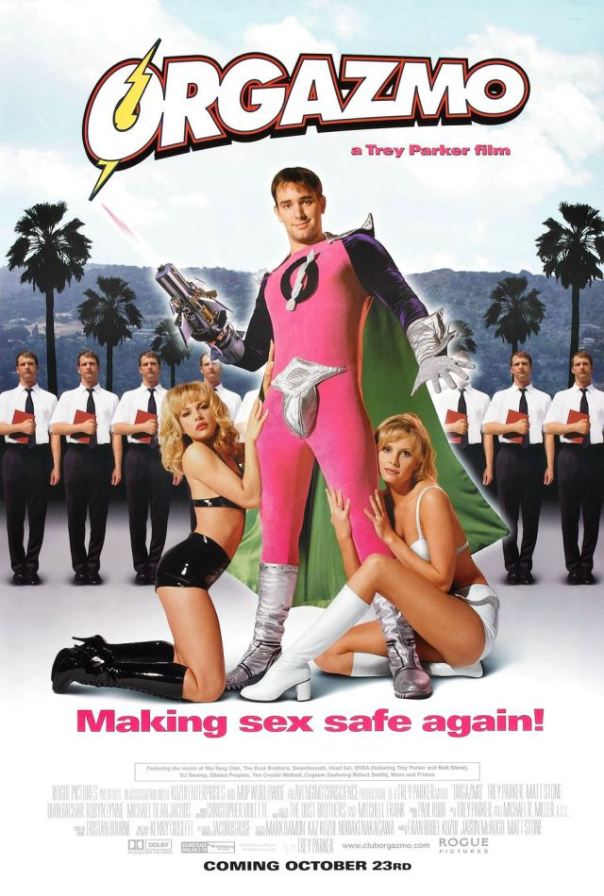 The thing I appreciated about this movie was that it doesn’t have a lot of nudity. (Hey I said I appreciated it. I didn’t say I liked it.) You would think that a movie that casts a bunch of porn stars in it would feature tits galore, but Trey Parker avoids what a lot of viewers would be expecting. There is one scene when the beautiful Juli Ashton starts to take off her top and right before she does her chest is blocked by an ugly hairy man ass. This happens almost every time a girl is about to take out her goods. All of the sex scenes have people keeping their clothes on and there really is no eroticism to any of it. It’s just a lot of silly fun. If you are young and still living at home with your parents. This is the only porn film you could watch and not care if your parents walk in on you. The movie is rated NC-17, but that’s just hogwash. This should have been rated R and that’s mainly just for the subject matter of it being set around the world of Adult films. When Trey Parker and Matt Stone were trying to work with the MPAA to get their rating lowered to an R. They found a lot of struggle because they were with an independent studio. Cut to a few years later when they made the feature “South Park: Bigger, Longer and Uncut“. Now they were financed by Paramount, and were able to get it cut down to the rating it got.

Now, you may be asking “how is Orgazmo an essential super hero movie?” Either that or you’re Googling images of Jill Kelly and Juli Ashton. Well the character Orgazmo is a hero for many reasons. He never betrays his friends, he is always honest, and he never changes who he is. Joe Young is a believer of the teachings of Jesus Christ, and he never once goes back on what he was taught. Jesus says to love all people, and even though Joe would never have sex with anyone out of wedlock he would never look down on anyone who does. Even those who have three or maybe four partners while a bunch of people are around filming them.