In my search for 100 of the most important and influential superhero movies, this is the last of those films that I’ve sought out to watch. I gave it a certain measure of importance mostly due to the label that released it on DVD. When a film is released under the Criterion label, it gives it an extra bit of prestige as they don’t just seek out any films to release. Instead, Criterion is generally known for releasing films that a cinephile would be most interested in. And considering that Mr. Freedom is the single, solitary superhero film released under the Criterion label, I assumed that it’s a mark of quality. I won’t go so far as to say that I was completely mistaken, but this was not the film I expected it to be by a long shot. While there is still a hefty amount of social satire and striking visuals, it’s marred by quite a bit of heavy handedness, low budget, and a nonsensical nature. 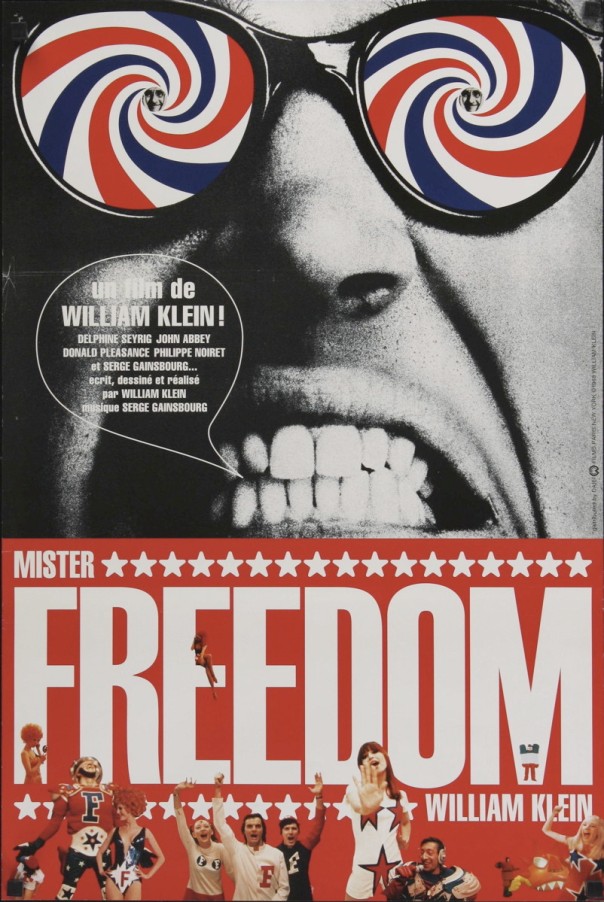 To try and put it into simple terms, Mr. Freedom takes place in an odd almost dystopian future where he is an ultra-conservative freedom fighter sent over to France to deal with the red threat. While there, he has to contend with his fervent band of supporters, the somewhat neutral government led by Super Frenchman, and the enemies led by Moujick Man and Super Chinaman. Mr. Freedom himself is a very stereotypical red blooded American, he loves guns, cowboy hats, football helmets, red, white, and blue, and hates Commies, Blacks, Jews, Gays, and anyone else who doesn’t agree with him. Our first introduction to Mr. Freedom in his red, white, and blue decked out football gear emblazoned with a giant “F” on his chest has him breaking into a house with a large Black family who have apparently robbed a convenience store. He then proceeds to kill every last one of them. Offscreen while chanting his theme song which spells “freedom” wrong, by saying “F-R, double E-D, D-O-M”.

There’s also a rampant element of both big brother and rampant sexism. When he gets his assignment to go to France, Donald Pleasance speaks to him over three flickering video monitors under the name “Dr. Freedom”, and spouts off a large amount of blatant propaganda. Every woman in this film is scantily clad, white, and acts like a typical bubbly bimbo. There’s a bizarre moment when he’s in France and goes to talk to one of his contacts in what appears to be a department store, only there doesn’t appear to be any customers and there’s a large group of blonde women, all dressed the same, jumping up and down. They follow the two as they have a conversation and occasionally repeat platitudes as they just circle them continuously with their very squeaky sneakers. The woman he works with in France also lets him know about their vast network of prostitutes which they use to make money and gain information. There’s even a moment during his first night at the hotel in France when a maid brings him his breakfast. He holds a gun on her the entire time and makes her strip and eat the eggs, which then turn out to have been poisoned.

Another bizarre element of this film are the costumes. Besides the fact that Mr. Freedom himself is decked out in overblown football gear that changes from scene to scene with different pads and helmets, his enemies are also rather bizarre. While not exactly an enemy, Super Frenchman is a giant balloon man that looks almost like one of those inflatable tube arm waving signs used on the side of the road. Super Chinaman is a giant inflatable Chinese dragon, and Moujick Man is wearing a giant red foam suit that looks like one of those padded suits to play a game of Sumo in Double Dare. There’s also other similar odd outfits like two guys in the background who look like a rainbow colored Michelin Man. It does make for some very striking visuals, but it just as much makes it look like an episode of H. R. Puffenstuff. 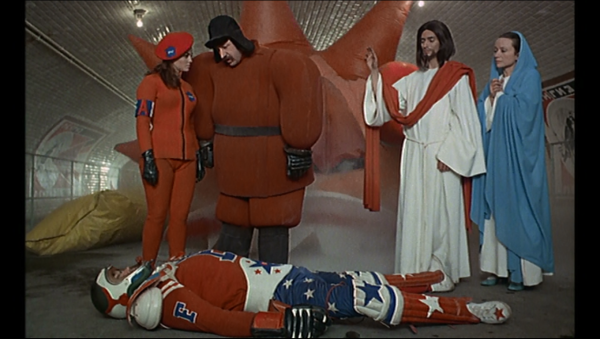 The biggest problem with this film is really the overly blatant political message. Mr. Freedom quite obviously represents America with his shoot-first-ask-questions-later attitude along with his very racist and single minded attitude of “Right is might, and might is freedom”. He will kill almost indiscriminately, and when things stop going his way, the solution is to blow up half of the country if not more. He’s a loudmouthed idiot who constantly spouts capitalist propaganda and conservative ideals that border very close to dictator levels of control masked as freedom. The one saving grace are the visuals, to put it simply, it’s almost as if Trey Parker and Matt Stone wrote this film to be directed by Terry Gilliam and produced by Sid and Marty Krofft, but none of them really put their best efforts into it. There’s plenty of pomp and circumstance, but when looked at as an actual story it doesn’t make any sense whatsoever. There is plenty here to dissect in terms of political satire in the way that he’s dressed, the way that he speaks, and the way that everything looks, but it’s message is somehow so blatant that the subtleties of meaning behind the pretty distractions in the background don’t seem to be that important anymore. And last but not least is the fact that this film appears to have been filmed in French, and then dubbed over in English but the only audio option is the English language version. The dubbing is handled well enough in terms of acting, it just syncs poorly and is a minor distraction. And in terms of being a superhero, it’s mainly just the trappings of the costume and status without any of the superpowers, though the ending makes it unclear if his arm was somehow robotic, or if it was just a very poor special effect. Until next time, this has been Bubbawheat for Flights, Tights, and Movie Nights.