I’ve often said that the worst superhero movie that I’ve ever seen is an incredibly low budget and indie superhero movie based on a public domain comic book called Captain Battle. This falls right along the same lines, and even had one of the same distribution companies. It feels like it could have been a mockbuster, though it came out two years before the Avengers. It has many of the same issues as Captain Battle, though the filmmakers were technically much more competent, they were still a long ways away from being good. Everything about this film was poor from the story to the costume design all the way through the acting and directing. At least the actors pretended their guns had some recoil, so they have that going for it.

This film has a very long winded way of going about bringing together a group of crimefighters even though it generally just focuses on a single one of them: The Scarab. And this Scarab is totally not just a complete rip off of DC’s Blue Beetle, despite the fact that it has an alien entity within a scarab artifact that attaches itself to a human host, grants him powers, and also imbues him with knowledge that he didn’t have before. He’s also joined along the way by an elite secret military agent codenamed Red who is absolutely nothing like Marvel’s Black Widow and a grizzled mercenary wearing a black trenchcoat and a giant skull (and crossbones) on his chest who couldn’t have been inspired by the Punisher. And just to round the group out at the end, they bring in a bodyguard who had a single scene early in the movie to join the group at the end as Doubledare.

The biggest problem with this film is that even though it’s only an hour and ten minutes long, it has five minutes of opening credits, five minutes of essentially an artwork slideshow that leads into almost ten minutes of closing credits, it takes almost twenty minutes before the film even gets to the point of the story. It spends an unusual amount of time skirting around this mysterious artifact along with this elderly Indiana Jones-ish professor without any of the looks or skills who gets amnesia before he’s able to tell his community college professor friend what he had found. And on top of all that, the dialogue is written in a way that is nothing like actual speech. It all makes grammatical sense, but the word choices make it sound very awkward and not true to life. This isn’t helped by the actors who have to spit out this awkward dialogue which ends up making it all sound extremely flat and lifeless. 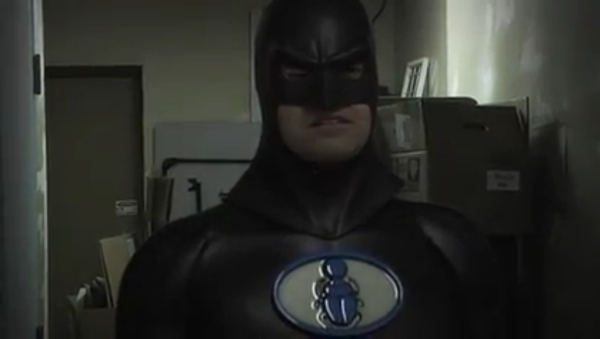 The costume design doesn’t help things much either. Most of the superheroes and the supervillain are just given a simple domino mask if that. The Not-Punisher merely has eye black around his eyes in a diamond shape while the Scarab himself actually gets the full superhero suit treatment with a very generic full black mask and molded black rubber muscle suit. At one point the film supposedly takes place in Central America, which doesn’t make much sense when they’ve found an Egyptian artifact, but besides that it looks like just a wooded area next to a local golf course. Even the mythology surrounding the powers of the scarab don’t entirely make sense. While this random college professor gets the scarab and its powers, the villain has this parchment that somehow allows him to sap the scarab’s powers while he reads it. There’s also a not-S.H.I.E.L.D. government agency that’s involved in things and sends Red to sort all this out, but when she confronts the two guys who steal the parchment in the first place, she knocks their gun out of the way but doesn’t even attempt to get the parchment even though she had ample opportunity. There’s also a climactic battle that takes place in a mattress factory for reasons that make no sense based on the characters, though it makes complete sense from a filmmaker’s standpoint. Unfortunately, they don’t even make very good use of the mattresses aside from a single moment where a character does a roll off of one of the mattresses. The best thing that can be said about this film is that it is so short. There’s not even a level of so-bad-it’s-good to it since everything is done poorly, but not incompetently. It has an air of a great practice movie to develop everyone’s skills, but they’re at least two more films away before coming up with something halfway decent. Until next time, this has been Bubbawheat for Flights, Tights, and Movie Nights.