Within a month of me finishing all of the animated comic book movies out there, they went and released two more already. Starting off with the latest entry in the Batman Unlimited series, something that I tend to think of as the “toy series” as it coincided with the release of a new toy line and overall is more kid friendly than the current Warner Premier animated movies that tend towards PG-13 to R for a more adult audience. Even when just looking at this comparatively to the other two Batman Unlimited movies that came before this one, there was a level of inconsistency with many of the characters like Penguin and even Killer Croc. But while it did take a while to win me over, the level of humor across the third act made up for a lot of nothing in the first two. At least a little. 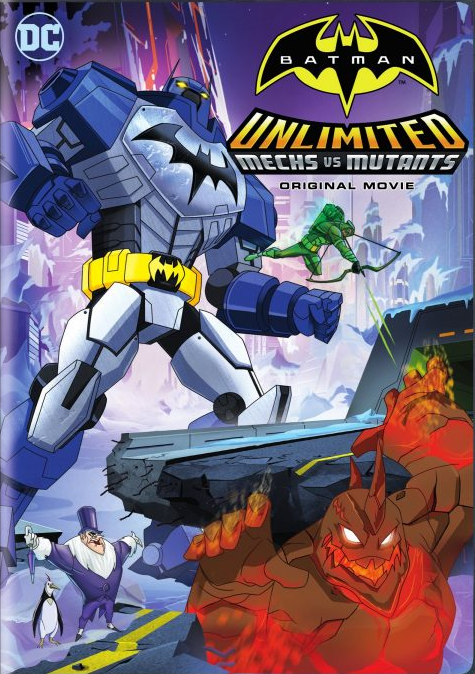 The film starts out with one of the tired tropes so it starts in the middle of the action before the opening credits then cuts to a “two weeks earlier” title card and things move on as normal. At least it does have the benefit of having this absolutely insane concept that’s right in the title where Batman is in a giant mech suit fighting a giant lizard (who you may or may not realize is Killer Croc until the movie tells you so) in the middle of Gotham City. Eventually we find out that Mr. Freeze is experimenting with creating giant creatures in the Arctic (or Antarctic, I forget) with Penguin along because of reasons. When they are foiled by a group of oil riggers with a giant drilling laser, they decide to pick up and head to Gotham City because that makes sense. Along the way, they pick up Croc, Bane, Clayface, and lesser known villain Chemo from Arkham and apparently use the chemicals of the latter to perfect his growth serum and use it on Croc. All because Freeze wants a cold city to feel normal in. 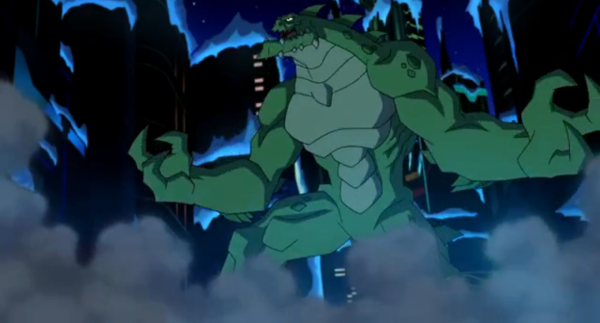 What was more bothersome about this film where some of the characterizations that felt very inconsistent, either compared to other DC animated films or even other films in the Unlimited universe. Penguin, for instance showed up in the first Unlimited movie where he was very scientifically inclined with a high tech monocle that acted like a view screen slash computer. During that film he reprogrammed a series of animal-like mining robots to work for him, but here he’s essentially just comic relief with his puppy dog-esque pet penguin that follows him around. Even Croc was featured in that film and while his character in general wasn’t very memorable, he did have a metal jaw there that is absent here. There’s also the matter of Robin, in the first two films it was Red Robin paired up with Batman, and while it was never explicitly stated who was behind the Red Robin mask, here it makes it clear that it was Tim Drake. But Batman has switched Robins to Damian who gets to be just plain ol’ Robin. But this is a far cry from the Damian Wayne who has been trained by Ra’s Al Ghul to be a highly skilled assassin in the League of Shadows that we’ve seen in several other animated movies starting with Son of Batman. Instead, he’s slightly older, but also much more insecure and untrained, embarrassed by getting tripped up by the Joker and having video of it land on YouTube. He is a laughable rookie who feels much more like a fresh Tim Drake where he isn’t sure of himself as a hero and has to have Batman literally explain to him that the business suits they wear are their costumes while their costumes are their work uniforms. He even slips up and calls Oliver Queen by Green Arrow and shortly afterward almost calls Bruce by Batman. 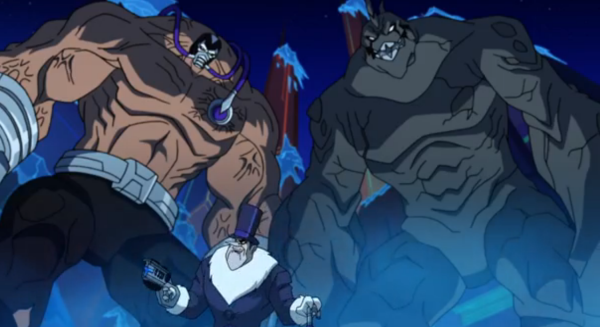 The overall plot is nothing special and it more or less just an excuse to get everyone to the main event that we already saw during the opening scene. But not only is it just Batman in a giant Batman-themed mech suit (complete with utility belt that seems to be just decoration), but Green Arrow also had one commissioned for himself, to Batman’s surprise. And besides a giant Killer Croc, Bane, Clayface, and Chemo all take a dose of the giant-making drug that happens to go wrong with Clayface and turn him into a half-lava creature. We also get appearances from Nightwing and the Flash, though they don’t do too much aside from the hilarious rapport they have with each other that’s based around Flash thinking they are friends while Nightwing completely brushes him off. That’s the sort of humor that really makes this film work, though it’s completely relegated to the final act. The Nightwing/Flash relationship, and other moments like Dr. Langstrom appraising the damage done to the Bat-mech compared to the almost total destruction of the Arrow-mech. There are also several moments with Penguin’s penguin Buzz like when he sneaks a couple vials of Freeze’s growth formula while Bane and Clayface look on incredulously, or when Buzz momentarily starts driving a tank and no one comments on how that is even possible or makes any comments about it at all. The worst bits of this are some of the same issues that were with the first two. The connection to the toy line just feels like it’s more important than story or characters, the Batmobile here especially looks like a cross between a Hot Wheels and a Transformer toy. And to top it off, there’s not a single female character in this entire film, minus a couple civilians that get a single line. It’s better than most of the 80’s half hour toy commercials, and younger kids will get a kick out of the action, but there’s just not much substance to it. Until next time, this has been Bubbawheat for Flights, Tights, and Movie Nights.