Hero of the Year

This is the first feature length movie based on the initiative that DC has started about a year ago that combines toys, a webseries, and comics that are targeted towards girls rather than boys. And since there isn’t a large enough roster of notable women superheroes in the DC universe, they add in a handful of villains into the mix to make up the full slate. One of the biggest issues that I had with the webseries was that it focused too much on the girly aspects of the concept and not enough of the superheroism, this film is much closer to the right balance with a fair amount of action, humor, and friendship without spending too much time on makeovers and costume designing. 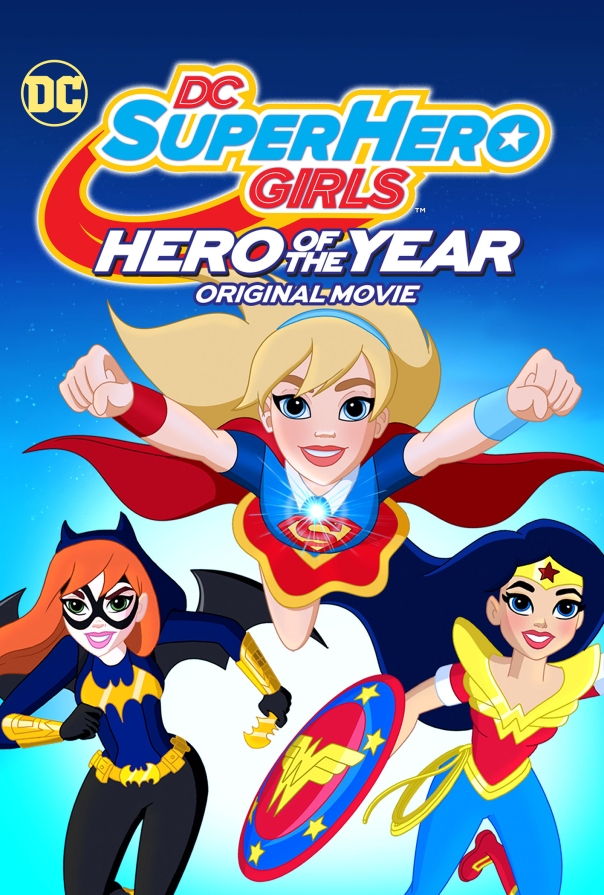 Where in the webseries, Wonder Woman was the definite main character, this movie also does a better job at spreading the focus out towards a few different main characters. Wonder Woman is still one of the leads, as is Supergirl, Bumblebee, and Batgirl who has been downgraded from the school’s IT consultant in the webseries to just a straight up student in the film. Not only that, but her father Commissioner Gordon is their science teacher. The school is preparing for their Hero of the Year presentation and the two nominees are Wonder Woman and Bumblebee, though Hawkgirl has a side story where she seems to still be competing for the title. But villains show up in the form of these shadow gems that can create minions out of darkness and are collecting various precious and unique metals/gemstones.

Besides the general plot of this film, there are a lot more action beats here, including one near the very beginning. They’re also spread out quite nicely along the rest of the film to help give it a nice pace over its typical 72 minutes. And while there are a handful of male characters in the Superhero High, they’re all generally relegated to the background and rarely join in the fighting, with the exception of Cyborg and Beast Boy which are the same voice actors from the Teen Titans series along with Starfire which was great to hear. 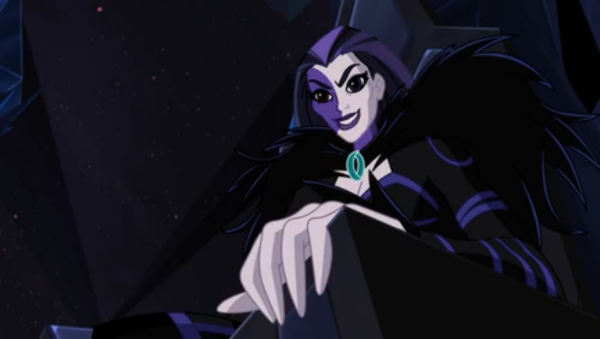 One odd point of contention is the fact that the school has to bring in so many villains to fill out the roster. Especially since they even include a line in the movie that “Superhero high is for super heroes, not super villains”. Meanwhile they have no problem with: Harley Quinn, Poison Ivy, Cheetah, Killer Frost as students, Gorilla Grodd as the vice principal, and Parasite as the janitor, among others. It does become a nice plot point as Big Barda becomes a redemptive character while still being a side character. There’s even a rivalry that turns into friendship between her and another side character Lady Shiva.

Honestly, one of the best things that this film does is really spread out the focus between all of these characters while giving most of them distinct personalities without becoming caricatures. Even though they have little impact on the overall story and are very much side characters, Big Barda and Lady Shiva get just enough development to feel like a part of this world. The same goes for Hawkgirl and Beast Boy. Even Harley Quinn is used to good effect though she does fall into the caricature category more than the others. But at the same time, she is this force of nature all to herself as she becomes this Looney Tunes-esque comic relief that draws attention to herself in a very Harley way. Some might find it more on the grating side of things, but it very much takes the edge off the action. 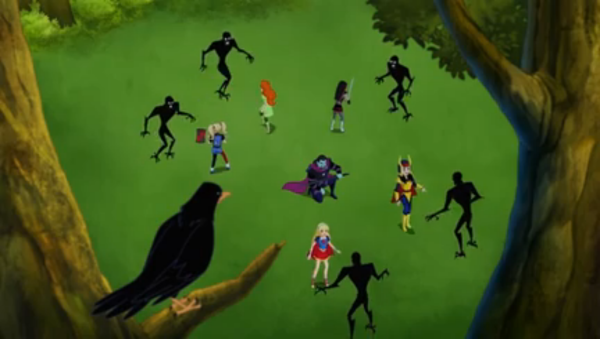 There’s also more of a focus on friendship and the type of heroism that isn’t just based on how hard you hit without turning it into an 80’s episode of the Care Bears. It doesn’t quite match the same level of quality as something like Steven Universe, but the heroes work together and help each other that really helps sell the feeling of being teammates rather than just fighting alongside one another. Bumblebee especially gets a lot of development in fighting through adversity as her suit begins to malfunction which makes her small and relatively ineffective for most of the film. There are also several character moments between the girls that show them more about themselves.

One of the more worrisome elements of this film was the overall concept of how it’s marketed towards girls and could fall into the trap of giving the audience what high level executives think that young girls want. But instead they give a large cast of female characters that are all strong in their own rights and sprinkle in some girly things here and there with some of the humor and language even though it’s odd to hear Bumblebee say “on fleek” or to see a young-but-possibly-not-high-school-age Lois Lane with a selfie stick. But it’s also filled with plenty of DC fan homages and Easter eggs like seeing a very brief shot with Parasite as the school janitor, or early on when Wonder Woman gets into her costume she does a Lynda Carter spin, they even toss in a ’66 style spinning batsymbol for a scene transition. But it’s all done in a way that if you don’t know what you’re looking for, it blends in with the rest of the film. It’s still overall disappointing that DC feels the need to separate their entertainment into the boys side and the girls side, especially since this came out right around the same time as Mechs vs Mutants which very much feels like the “boys” movie as it features absolutely zero female characters. It is possible to have a middle ground while still marketing these movies more towards girls or towards boys. It’s even possible to create a concept that’s marketable to both boys and girls without sacrificing quality or story. As it stands, if this is what they’re willing to give, at least it is something worth watching. And for my daughter’s part, she did enjoy it as well. Until next time, this has been Bubbawheat for Flights, Tights, and Movie Nights.