Valerian and the City of a Thousand Planets

Valerian and the City of a Thousand Planets 2017

Ever since the first few trailers came out for this film I had certain expectations for how this film would turn out. The visuals immediately struck me as being absolutely gorgeous and showed me a world that I had never seen before filled with aliens that look unique but still familiar. My biggest concern from the very beginning were the two leads: Dane DeHaan and Cara Delevingne. DeHaan has had mixed success and Delevingne was by far the worst part of Suicide Squad and after watching the film my fears were confirmed. Valerian and his partner Laureline are the weakest spots in this fascinating and wonderful, fully realized universe. I just wish there was a better story and characters that I could explore this world without those two in it. And as is always the case in all movies, but especially recent movies I will be discussing the movie in full, including potential spoilers so here is your warning. 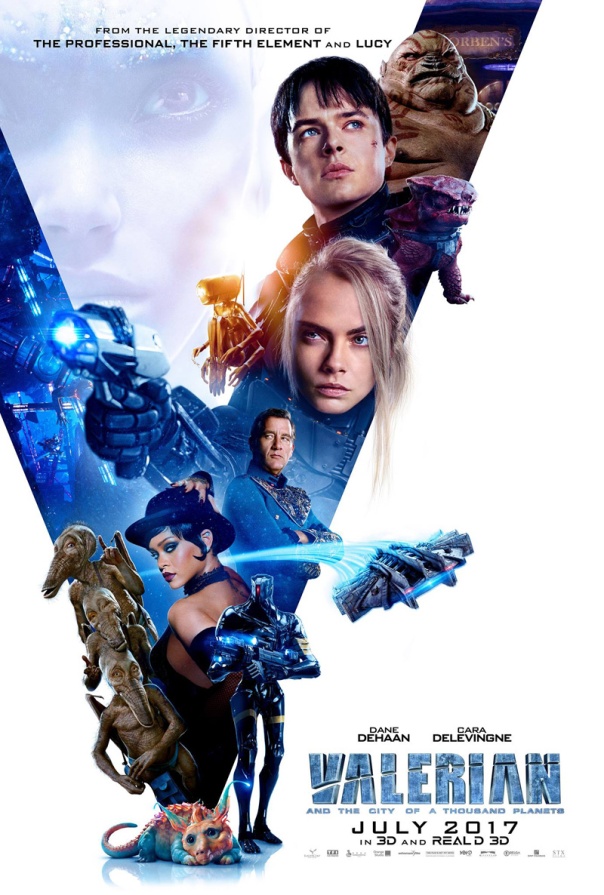 Before getting into the plot, something has to be said about the world of Valerian. The opening sequence is a quick shorthand into the essence of the real main character and that isn’t Dane DeHaan’s Valerian, but the city slash space station itself, Alpha. It’s essentially an intergalactic ideal of what the United States is supposed to be as it starts as a space station that accepts docked extensions from other countries and keeps expanding until it’s essentially a city planet that goes off into its own orbit and consists of thousands of alien species that live and cooperate together in peace. And while there is war and mystery in this universe, the space station itself is generally regarded as a Star Trek-esque utopia.

Unfortunately, with a thousand races, it’s difficult to get a real grasp on any single race other than a visually remarkable yet one-dimensional race. The most fully realized are the elegant and beautiful Pearls. They have an aptly pearlescent skin, somewhat androgynous quality, and a wise native quality that’s somewhat reminiscent to Avatar’s Na’vi only with the ability to adapt to the technologically advanced future. The only other real alien races with interesting qualities come down to specific characters where it’s difficult to determine whether the characteristics of the character are due to the alien race, or are specific to just that character. Like the trio of winged, ducklike aliens who feel like three parts of the same whole. They are a stereotypical informant character that seemingly knows anything and everything and are only interested in how much money that information can get them. The other interesting alien is Bubble, a shapeshifting alien sex worker whose voice and most common form is played by Rihanna. She has a bit of personality and back story, but she felt way too much like a filler character that (spoiler alert) was killed off without reason, without cause, and without remorse. 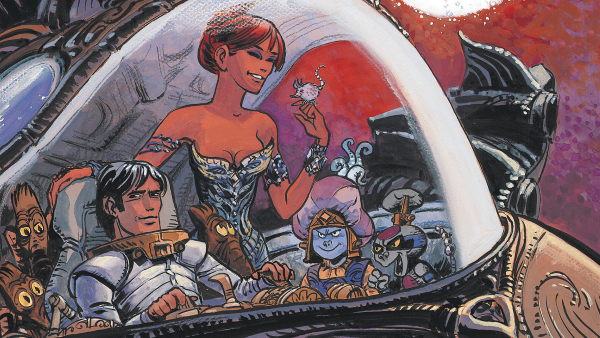 From the original comic series Valerian and Laureline.

The heart of this movie should be the two main characters, Valerian and Laureline. Valerian is played as a cocky, highly capable military special agent who’s supposedly in love with his partner Laureline. The problem is that his arrogance reduces the threat of any potential danger that he is in. Not only that, but it also puts the audience on Laureline’s side when he declares his love for her and yet the only way that he shows his love for her is that same declaration. Meanwhile, Laureline still offers blind devotion and dedication to him while also justifying her refusal of his advances. There’s supposed to be a playful back and forth between the two characters, but the two play most of it so flat that it comes across as more rote than playful.

But where this movie really shines is through the visuals. Alpha as this hodgepodge space station really looks like a living, breathing world filled with a myriad of visually different areas. From the underwater district to the red light district, there’s always some fascinating and beautiful detail somewhere on screen. And while clumsily named, the Big Market is a fascinating concept brought to life as this bizarre, multi-dimensional zone that connects two disparate areas taking up the exact same space. It’s also the most interesting action sequence as Valerian’s hand becomes trapped in the other dimension while the rest of his body is still on the regular one. Though it also added to the piecemeal flow of the overarching plot of the film as only the items they are retrieving make a continued impact on the film while the slighted mob boss disappears from the rest of the film.

There’s also this overarching mystery and wide reaching conspiracy that’s spread throughout the film, starting with the opening sequence/dream involving the Pearl alien race who have been wiped off the face of existence to cover up a global genocide. The mystery has some interesting points to it, but the pacing and revelations don’t add much to the story. Not only that, but the final reveal becomes a series of odd choices where some should work in theory, but they just don’t on screen. The Pearls aren’t after vengeance, and just want some semblance of their world back. But the commander of the station just also happens to be the one behind the kill order and is going to great lengths to cover it up complete with his own set of loyal, robotic soldiers who turn on the rest of the command staff once the reveal happens. And while most of the good guys are pinned down, Valerian is able to take them out with relative ease, and once the dust clears there appears to have been very few, if any, real casualties. Which is a shame, because on the surface this film has a lot going for it and it absolutely is a wonder to look at. But instead of becoming a highly sought after juggernaut film that Avatar was despite also having a severely flawed story, this seems headed towards being a failure along the lines of John Carter or Battleship. Until next time, this has been Bubbawheat for Flights, Tights, and Movie Nights.