← Valerian and the City of a Thousand Planets
Black Mask →

It’s been a while since I’ve written anything down here on this site, but I still have a lot of comic book and superhero films to cover so I haven’t fully gone away. This weekend I was able to make it to the theater to see the latest comic book movie to hit the screen with Matthew Vaughn’s Kingsman: The Golden Circle. I was a big fan of the first film and while I thought that they brought a lot of the same attitude and action of the original, once I left the theater, much of the character development and overall plot just didn’t hold up to deeper thought once I left. It’s still fun, but not quite as impressive as the first entry in the series. 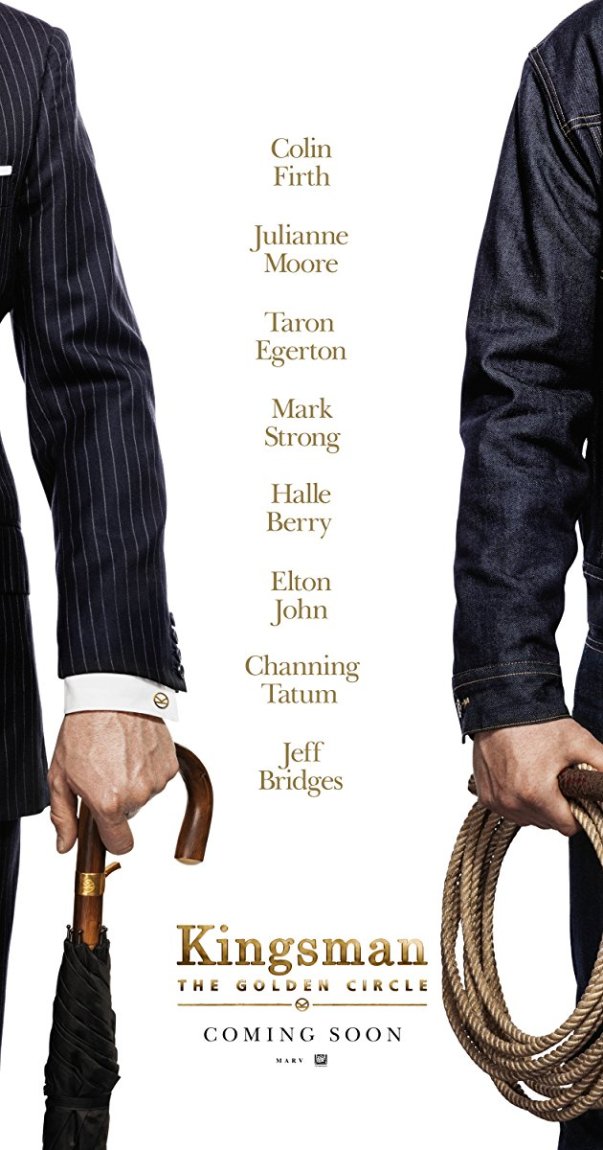 Looking back on the first Kingsman, it turned out to be a combination of James Bond and Deadpool. It took the spy genre and threw in some R-rated violence, swearing, and a lot of irreverence but kept all the great action and adventure and it was hella entertaining. Often when discussing the first movie, the stand out scene was the violent church action scene. And in this movie, Vaughn seemed to have taken that scene, split it up and gave us a half dozen mini-church scenes in the sequel. Unfortunately, while the first film focused much more specifically on Eggsy’s training and character arc, the sequel focuses much more on bringing in new characters while the current characters generally remain stagnant throughout the film.

This time around we’re introduced to essentially the American version of Kingsman called Statesman. Instead of having a tailor as their front, they are inspired by a liquor company, a highly successful liquor company at that, as they make it a point to mention that their assets are considerably larger than Kingsman’s. And while the members of Kingsman are stereotypically posh, upper class British, members of Statesmen are stereotypical cowboys along with all the highly American accouterments. Their weapons are things like shotguns, whips, lassos, and baseball bat-themed gadgets. The characters are fun in small doses, but often felt like a one-note joke that stretched on for way too long.

Overall, Kingsman was quite fun to watch. The action scenes and jokes were well done and entertaining. The characters work well with each other, though Channing Tatum’s character had surprisingly little screen time based on how he was presented in the advertising. With most spy movies there are elements of double agents and misdirections and they are present and fairly well done here in the sequel. The absurdities were also ramped up from the original film, while there isn’t anything quite comparable to the fireworks scene from the first movie, the villain’s plan is just as absurd, if not moreso, and there is a cameo that is hilarious as it becomes not just a cameo but a running joke that gets funnier and more out there each time it’s brought up.

The most disappointing thing about this film is the lack of depth. It’s incredible fun on the surface level but doesn’t hold up to a more critical eye. While Eggsy has a surface level arc regarding his relationship with the princess that was essentially just a one-off joke at the end of the first movie, he really just remains the same from start to finish. The same goes for every other character in the movie with the slight exception of Harry, whose “surprise” return was highly advertised, but his arc really only exists because his memory loss regresses his character and his arc returns him back to his original state. The villain’s plan was also discouraging as something quite unbelievable both in terms of how successful it would be as well as the convenient timing of all the stages throughout the world.

Besides the lack of depth, there’s also a significant lack of female representation. In the previous movie one of the fellow recruits was female and she was just as capable as Eggsy though she was basically kicked out of that movie’s climax. And in this movie she gets killed off early on without any replacement character. There was also a great female henchwoman in the first movie without any replacement in this film aside from a shallow and unfaithful girlfriend to a henchman. The main villain in this movie is Julianne Moore, but she is more of a character with the plan and in a movie filled with over the top action, there’s nothing for any women to do. They even introduce the Statesman version of Merlin with Halle Berry playing the Statesman tech who wants to become a field agent. But at least throughout this movie she never gets her chance to do anything without being behind a computer.

There are plenty of mistakes that the Golden Circle makes in terms of movie sequels, but there are still a lot of things that it gets right. While it doesn’t really delve any deeper into any of the characters, it captures the same tone and feeling of the first film and fills it with plenty of fun action, crude humor, and colorful characters that play well off of each other. If you’re looking for a James Bond satire, this isn’t quite what you’re looking for, but in terms of a kick-ass spy movie that’s a great, light watch that will make you laugh, this is right up your 50’s themed bowling alley. Until next time, this has been Bubbawheat for Flights, Tights, and Movie Nights.

← Valerian and the City of a Thousand Planets
Black Mask →