← Aquaman
Flights, Tights, and Movie Nights is on Patreon →

This is another movie that I just happened to come across randomly where I saw the movie poster in a Facebook group and noticed the magic words along the top of it “Based on the graphic novel”. From the looks of it, it seemed like a modern version of the old women in prison exploitation genre, and while it took a little while to get there, that’s exactly what it was. I don’t have a whole lot of experience in that genre so if it was any sort of send up or honest to the genre I wouldn’t know it. And as for the graphic novel connection, I didn’t look up the info until after I watched it and it seems like The Asylum made a graphic novel tie-in to the movie and released it a few months before the movie came out. It’s difficult to determine for certain if the movie was actually based on the graphic novel or vice versa, but since the poster does have the magic words, I’ll stick with it. As far as the actual quality of the movie, the main character was uninteresting and it was overblown, overdramatic, and shifted gears on a dime. It was just too much and too little all at the same time.

The movie starts out with some cello music that very quickly turns into abuse and attempted rape that ends in a bloody accident. The girl, Anna Nix, takes a quick trip through court and gets put in jail within the first five minutes. Sorry, a juvenile detention center, though there’s very little mention made of the fact that technically everyone in this prison is supposedly under the age of 18 despite the excess amounts of nudity throughout the movie. Shortly after getting put in prison, she gets confronted by the leader of one of the jailhouse gangs and pretty much everything bad that can happen to her does happen to her throughout the course of the movie. And unfortunately, through most of these problems, Nix just takes the abuse with a stoic non-expression with her head down and little to no reaction. It’s not until later on in the movie where she gets a couple moments of rage before going straight back into her unexpressive state. 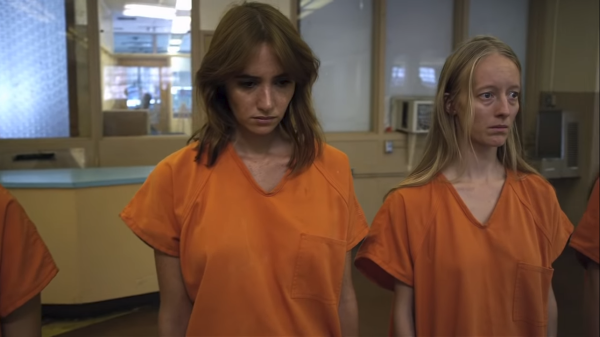 This is Anna’s default expression for 75% of the film.

The other biggest issue with this film is the jarring change in tone as it moves from one terrible event to the next with little room to breathe. It only took 5 minutes for her to go from being a regular person to being put in jail, and the film jumps from her being propositioned by her cellmate to being attacked by the leader of the Black prison gang to being assaulted by the warden to becoming a drug addict out of nowhere. There’s no motivation for any of this, she just gets pushed quickly from one plot thread to the next and about every other one involves getting naked and/or having sex.

A page from the original graphic novel

There is a supposed character arc for Anna Nix throughout the movie, but it’s difficult to get a handle on her character because of her lack of expression. She goes through being accepted into one of the gangs and becomes the gang leader’s pet project, to being the warden’s favored prisoner to becoming a heroin addict to going through depression in solitary to cleaning up her act in the psych ward to finally taking down the abusive warden with the help of the gang leader. There’s also the sympathetic nurse that takes care of her through the course of the prison beat downs that happen several times as well as the suicide attempt. But as always happens in these cases, when things start to look up for her at the beginning of the third act, she still has to be taken right back down to the bottom and the warden has the nurse killed by the other inmates before she can rat on what he’s been doing to his prisoners.

The acting in general is passable, there’s just not enough time to focus on any one thing going on at a time. Each scene generally only lasts five minutes or less before moving on to the next scene that’s often a completely different tone. The music doesn’t help matters much either as it’s typically a generically bad piece of dubstep or some bad heavy metal during the brief sex scenes. It’s difficult to really get a feel for what this film is going for in general because during the first third or so of the movie, there is some nudity but it’s presented in a very dramatic and sympathetic way. We see Anna disrobed and shamed before she’s hosed down and it’s not until the third nude scene where there’s actually some exploitative tones to it as she has sex with her cellmate. There’s not enough fun in this movie to really take the sex scenes as titillating, but there’s not any other excuse to have them in there. And on the other side of things, we just don’t get enough character to feel sympathy for Anna’s plight. And on top of all that, she just keeps getting piled on and piled on with a ridiculous amount of hardships through her entire journey in jail. There’s only a couple bright spots here and there but they’re very brief. There’s just not enough reprieve to give the audience a moment to breathe and root for Anna again before the crap of jail life gets piled right back on top of her. It’s overall a pretty poor excuse for a modern day women in prison movie that doesn’t get the tone right at all and fails as either a fun and exploitative prison movie filled with sex and girls fighting each other or a dramatic look at a young woman being broken by the hardships of prison life at her age. Until next time, this has been Bubbawheat for Flights, Tights, and Movie Nights.

← Aquaman
Flights, Tights, and Movie Nights is on Patreon →