It’s been a while since I’ve been able to keep up with anime. There was a time when I was a big fan and would keep track of every new release and would follow certain series releases on DVD. Nowadays, there’s too many for me to keep track of, but every once in a while something comes my way that piques my interest. Gantz was one of those series that I followed on DVD. It’s a bizarre series about people who have died and are then resurrected by a giant black orb and sent out on missions slash games to kill aliens with high tech weaponry where they will most likely die. After the anime series came a few live action movies, and this most recent film is a CGI rendered anime that follows likely a few months to a year after the series left off. It’s been a while since I’ve watched the original anime and even a while since I watched the first live action movie (and haven’t gotten around to the live actions sequels), but while this was so different that it barely felt like it was still Gantz, it’s still a bizarrely enjoyable ride. 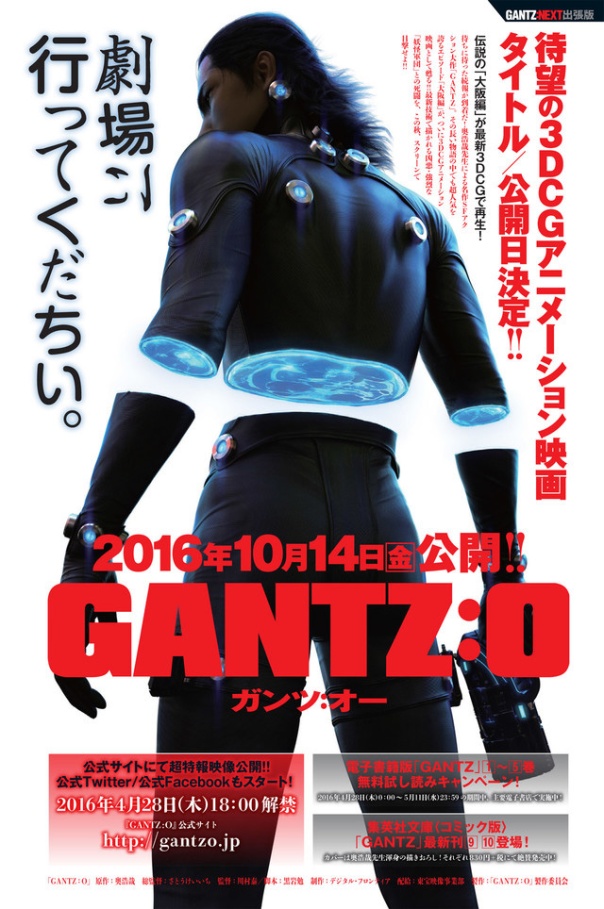 Gantz is an odd sort of superhero tale that often feels more like an action horror film and this movie jumps straight into the action where we get to see what appears to be the hero (and was the hero of the previous series) make a heroic sacrifice to save his super suit wearing friends from a dangerous alien creature. Shortly afterward we’re introduced to another kid who makes a heroic sacrifice in the real world to try and save a stranger from a knife wielding maniac only to fail and die. And then he wakes up in the Gantz room and is told the rules of Gantz before they are all teleported into Osaka for the current mission. But very quickly it’s apparent that things are different.

While the weapons were always advanced to a certain point, this one ratchets up the firepower as it really explores the 100 point reward menu a bit more. As the Tokyo team meets the Osaka Gantz team, we get to see our first vehicle that feels somewhere between the tech that has been previously introduced in Gantz as well as a bit of Tron. We’re also introduced to guns that are a bit more like rifles that fire a delayed pulse of basically an air hammer that pounds down an area of about 20 feet. There’s also a katana, but about halfway through we’re introduced to the most different weapon of all when the teams are faced with a Kaiju sized alien threat and the leader of the Osaka team uncloaks his giant mech suit and we’re treated to a little taste of Gantz’s Pacific Rim.

Of course, what it really comes down to are the people involved. And this time around there are a few main players. Kato is the newcomer to this team although we eventually find out that it is the same Kato from the previous series who had won his freedom from the game previously but went and got himself killed again only to return to Gantz with no memory of his previous games. He’s the near-perfect hero who thinks of others more than he thinks of himself and will put himself in harms way if it means that others have a chance to live. The Tokyo team is filled out with an actress, a middle aged man, and a sulky teenage gamer who has been in the game the longest. The Osaka team is generally just hotheaded power gamers who have the weaponry that comes with players who have gotten the 100 point upgrades multiple times, but there’s also a young, single mother who prefers to watch from the sidelines but becomes enamored with Kato’s selflessness.

There are a couple other big differences with this Gantz game compared to previous games as the sheer amount of aliens is quite staggering. Not only that, but previously it seemed that the Gantz teams operated in relative secrecy, but this time around it’s something that’s been covered in the news. While people don’t exactly know what these Gantz teams are, they have been spotted, recorded, as have the creatures and the destruction that follows them. But what that means for this movie is that there is a lot of action. A whole lot of action. With an experienced Osaka team filled with overpowered weapons, we get a lot of gore-filled action with some amazingly designed aliens. In fact, the animation overall is stunning. It’s a realistic CGI that still has anime proportions and style to it. The creatures all look amazing, as does the weaponry and the ample amounts of gore involved. One thing that was surprising about the live action movie compared to the anime series was the lack of nudity. This movie has a bit of a bizarre compromise as one alien initially appears as a weird, old man, but then he transforms into a naked woman. But it doesn’t stop there, he becomes multiple naked women that envelop the Gantz player and he keeps forming other naked women until he becomes a massive creature that’s composed entirely of naked women for some grotesque body horror.

Two of the members of the Tokyo team.

Gantz: O was equally what I expected and nothing like what I expected. Even from its title which I initially thought was a zero which made me think possible origin story, but eventually realized it was the letter O for Osaka. There are also plenty of Gantz elements that come from previous incarnations like the multiple fatalities on the human team, the interesting and unique alien designs and abilities, as well as the human interactions and self sacrifices. The concept of Gantz itself creates this unique perspective of self sacrifice because as long as you finish the mission, even if you are on the brink of death you will be revived unharmed. And even if someone dies, they are stored in Gantz’s memory banks and can be revived if someone were to score 100 points from defeating aliens. But the scale of this movie is much grander than any previous Gantz, even from the start by sending the Tokyo team to Osaka where they have their own team. But the variety and power level of the creatures faced is far above almost anything faced in previous missions. But it was still Gantz at its heart and this film pulled off bringing in compelling characters and amazing action. It’s absolutely worth checking out as it’s currently on Netflix US. Until next time, this has been Bubbawheat for Flights, Tights, and Movie Nights.