This is a movie you might not have heard about until recently even if you follow DC Animation, it’s a bit of a stealth release, only popping up on people’s radars when it was included in Target’s mailer last week as it is a Target DVD exclusive. One thing I immediately found out about it was that it is something much lighter in tone than many of the recent DC Animated movies. It’s much more in line with an updated version of Super Friends so I was excited because it was something that I could watch with my daughter Jena without worrying if there was too much blood in it. I’m always a fan of a time travel story and this has some very fun moments without bogging itself down with the nitty gritty details of it. The movie mainly follows a couple soon-to-be-members of the Legion of Super-heroes 1,000 years in the future: Dawnstar and Karate Kid. But back in the present, there’s also plenty of the Justice League and the Legion of Doom with many of their classic Super Friends roster with the addition of Cyborg who was only in the tail end of the Super Friends. I had a lot of fun with this movie and so did Jena. 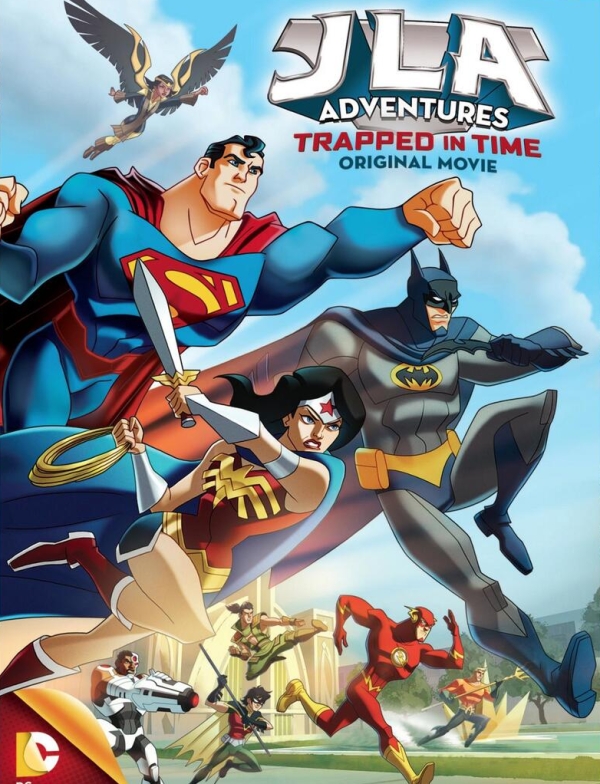 I’ve said how light this movie is compared to the recent DC movies, there’s the two younger heroes as the main characters as well as a bit of screen time for Robin. There’s also much more humor in this movie than any recent feature, my favorite moment is probably when some of the villains go back into the past to get rid of Superman on Earth when he was a baby in Kansas. And there’s a very Looney Tunes-esque sequence between the three heroes and four villains where the baby keeps getting passed back and forth which starts with Cheetah and Solomon Grundy in bad costumes convincing the Kents that the baby is actually their baby, and ends with the Flash returning the baby to the Kents by running alongside their truck only to have them find out that the baby has been replaced with a Toyman doll. 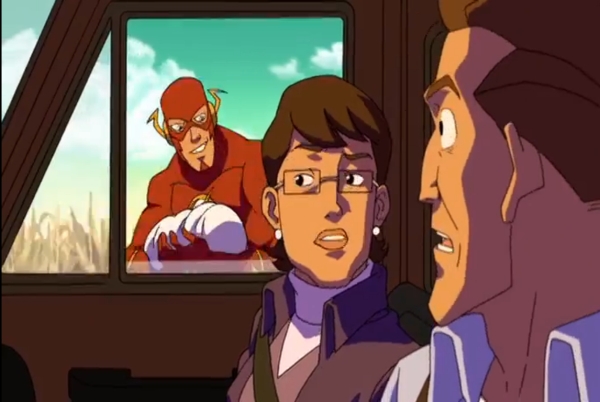 The heroes in the Justice League themselves don’t really get a lot of development outside of possibly Robin who gets a few moments to prove his worth. They are all mostly just there for backup to the two young heroes from the future, Karate Kid and Dawnstar. Both of these heroes I had never heard of before watching this, Karate Kid has supposedly studied all forms of martial arts and can use his Ki Sight to see the weak points in any person or object. While Dawnstar is a winged woman who has the power of light, or something like that. Her powers are never clearly explained, she is able to do a number of things like finding a person with a glowing ball of light, glowing really brightly herself, and shooting darts of light energy. She also has a somewhat monotone way of speaking, like she is fairly naive in the ways of how the world actually works, and she is also very unsure of herself. Karate Kid however is overly cocksure and headstrong which obviously makes them the quintissential odd couple, and it generally works for what it is.

The villains are very much a more classic group of villains, with Lex Luthor, Captian Cold, Black Manta, Bizarro, Cheetah, Gorrila Grod, Toyman, and Solomon Grundy. Of them all, Lex Luthor obviously gets the most screentime, and Bizarro gets most of the funny moments along with Toyman. The designs on all of them are a nice mix between the classic designs of the Super Friends, which I never really watched but am familiar with, and the more modern animated DC designs. It was great to see the classic looking Hall of Doom even though I don’t think they had the iconic moment of it rising up out of the water. There’s also the new villain: Time Trapper, which allows Lex to travel through time and is the center of the climactic battle towards the end of the movie.

Even though it doesn’t exactly have to make perfect sense, the time travel stuff was not very tightly scripted. When the past is changed, Time Trapper is allowed to remove paradoxes from the timeline, like removing the Justice League after they succeed in getting Superbaby off of Earth. But they don’t address the fact that the Justice League could have formed without Superman, and they all wouldn’t be in that situation if the Justice League hadn’t botched the plan which allowed Lex to get frozen and survive into the future in the first place. It was also a slightly jarring shift in tone during that climax when the humor goes away and things start to get fairly bleak. But it’s still bleak in the PG sense, not even really bordering on PG-13.

In the end, I had a lot of fun with it. The animation is great, the voice work is great. I haven’t seen many episodes of Batman: Brave and the Bold, but it was nice to hear Deidrich Bader’s voice for Batman as well as the narrator in the future scenes, it makes me excited to see the Lego Movie soon because I always thought Will Arnett’s voice sounded very much like Bader’s Batman voice. It was also interesting to see the teaser for a possible sequel at the end of the movie, as up until now DC’s animated titles have all pretty much been stand-alones. I’m definitely looking forward to seeing more of this style of animation right alongside the darker stuff at the other end of the spectrum. Until next time, this has been Bubbawheat for Flights, Tights, and Movie Nights.