Graphic Horror: Tales From the Crypt

Welcome to my first entry in the Graphic (Novel) Horror blogathon, where I and other bloggers take a look at horror movies that could be, should be, or were graphic novels. I’m kicking it off by watching the movie that was made many years before one of my favorite TV shows that were both inspired by the pulp EC comics series including Tales From the Crypt, the Vault of Horror, Haunt of Fear, and several other titles. I had never seen this movie before today, but as this was an anthology inspired by the comics just like the television series, I was already familiar with the story of two of the shorts even though there were some minor differences, mainly in the length as the TV series was a full half hour while this includes five shorts and a wraparound story in about an hour and a half. The budget for this movie felt quite small with many cheap looking visual effects, but I think it still often captured the feeling that I got from the Tales From the Crypt television show with the macabre stories and occasional twist endings. While not as good as the TV show, it was still entertaining to watch.

As I mentioned, this movie is an anthology with a wraparound of a group of people visiting a catacombs when they get separated from the group and end up trapped in a room with a mysterious figure in a hooded cloak who in turn reminds them each of how they got there. Although I think it’s funny that it appears that it’s not a story that’s being told to the others sitting around the room, but it’s something that they merely remember in their own head, so everyone else is just sitting around watching them stare off into space for ten to twenty minutes, or at least that’s what I’m assuming happens. While the Cryptkeeper here is not anywhere near the level of the animatronic Cryptkeeper voiced by John Kassir, he does a passable job without bringing in the bad puns and high pitched laugh, instead going with a much more morose and creepy vibe.

He actually looks more like the Vault-Keeper though the Vault of Horror movie came out a year later.

I won’t go into detail in each of the five stories, but I do want to talk a little bit about my favorite one which was the final one. It was also one that was later done in the TV show and it involves a military officer who becomes the executive of a home for the elderly blind, and he immediately cuts the budget on everything for the patients while keeping himself and his dog in the lap of luxury in the headmasters quarters. After the death of one of the patients, the rest of them get fed up and capture the headmaster and his dog while they set up an almost Saw-like trap where he is led through a wooden corridor that has a narrow patch that is lined with razor blades, and his dog that has been starved for several days is let out and when he reaches the razor corridor, the blind man turns the light off. It had one of the best storylines, and I really enjoyed the actor that played essentially the leader of the blind patients. He had a great look to him and he really sold his performance.

There was one other one that I will mention briefly, and it follows a rich man who lives across the street from a poor garbageman who has lived there for ages and fully owns the house, he also makes toys for the children, but because this rich brat thinks poorly of his social status in life he decides to ruin this man’s life by getting rid of his dogs, convincing the local children’s parents that he’s a bad influence, getting him fired shortly before he’s eligible for retirement, and finally sends him valentine’s cards making fun of him supposedly from all of the members of the town which causes him not to sell the house, but to kill himself. And then he comes back one year later on Valentine’s Day to kill the spoiled rich guy as a zombie. Peter Cushing is probably one of the most recognizable actors in this movie and he does a great job as the old garbageman, and the visual from when he comes back as a zombie is one of the more visually interesting scenes in the movie.

Which does bring me to one of the points of this blogathon, while this was actually adapted from a graphic novel, there are only a few moments that I felt looked inspired from the comic book nature of the stories. One of them was the aforementioned zombie moment, I also felt like the look of the wooden corridor had a nice look to it, and there was a nice bit in the first segment with the homicidal Santa Claus when he is seen in the window while the woman is crouched just below the windowsill, and also the final scene where he is behind the curtains and puts his hand through the slit in the middle to ring the bell. I also did quite enjoy the bit during one of the middle segments where a large portion of it was done in first person perspective where they hide the face of the character until he finally finds a mirror. There’s quite a few moments of visual flair even though the majority is shot fairly simply and on a lower budget. 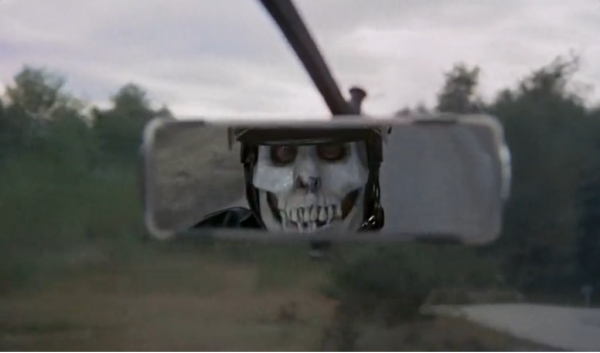 Before I wrap up, I also wanted to mention that there’s still plenty of time for you to join in this blogathon. Simply write up a post about a horror movie that would make a good graphic novel or vice versa. It can be a review, a list, whatever you want and I’ll tweet it up and add it to my main blogathon post. So join in the action any time until the end of March. Until next time, this has been Bubbawheat for Flights, Tights, and Movie Nights.