Sin City: A Dame To Kill For

I think more than any movie before it, this had the quickest drop from being a movie that I had been looking forward to the most to being a movie that I was dreading watching. All after I started hearing all the negative reviews coming in from many of my fellow reviewers who were watching early screenings. It warned me away so much that I avoided seeing this movie opening weekend. Although I wouldn’t have had to worry about my other usual concern when seeing a movie opening weekend as the crowds wouldn’t have been an issue with the tepid $6 million opening. Maybe it was the poor marketing, maybe it was the fact that it’s been ten years since the first Sin City, maybe it was because the second 300 movie also came out earlier this year, but nobody went to see this movie. This movie is still a far cry from The Spirit, that pseudo Sin City directed by a lone Frank Miller with all of the elements of Sin City but not in the right amounts. There are plenty of great moments in this movie, but none of those moments ever added up to a cohesive whole and in the end I was left wanting. 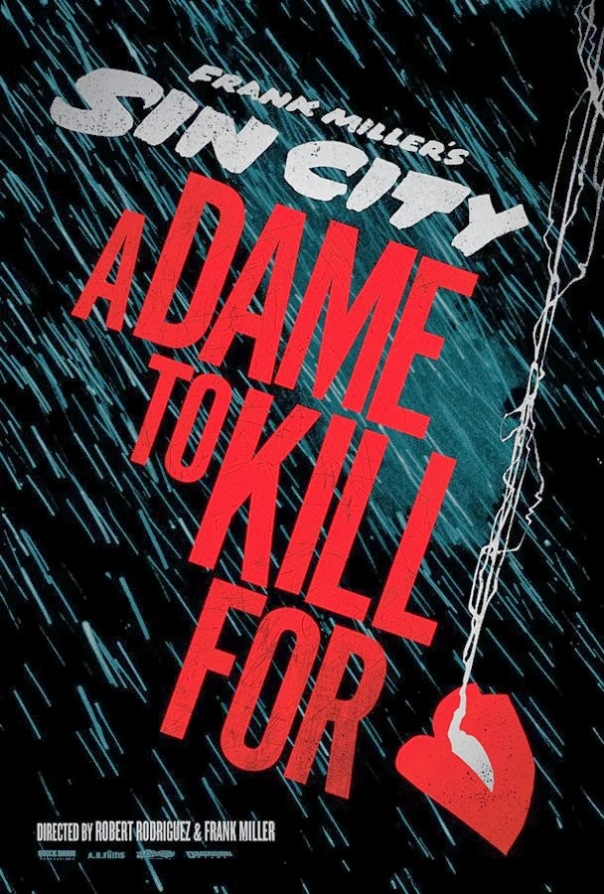 Similar to the first Sin City, the film takes place in Basin City and follows a few different stories that occasionally intersect. Unfortunately, those intersections are generally just because Marv is awesome and likes to pop up in other people’s stories, or it takes place at Rosie’s bar and strip club. The titular story line follows Dwight, who was played by Clive Owen in the first movie and Josh Brolin here, as he deals with the dangerous seductress played by Eva Green. This was the only one of the main three story lines pulled from the original Sin City comics, while the other two were written specifically for this movie. The second one follows a gambler who never loses named Johnny, played by Joseph Gordon-Levitt, as he seeks to beat Senator Roark at his own game, while the last story also seeks revenge on Roark as Nancy seeks revenge for the death of Hartigan. One of the biggest problems with this movie is that it doesn’t entirely mesh well with the first movie and its timeline. Dwight’s story takes place before the events of the first movie, and it also suffers from the lack of cohesion as it was forced to recast the parts of Michael Clark Duncan, Clive Owen, and Devon Aoki for different reasons and eliminated Brittany Murphy’s role which I have heard is notable in the comics. Towards the end of the story, there is the explanation for Dwight’s change in appearance, but he ends up looking like Josh Brolin with Clive Owen’s haircut. And Nancy’s story adds more confusion as it takes place after the first movie as Hartigan is dead, and yet Marv plays a large part while he ends up dead in the first movie. Even though it’s been years since I’ve seen the first movie, I still remembered enough of the broad strokes to be annoyed at trying to figure out where this movie fits in exactly.

Aside from the timeline quibbles, none of the characters in this movie packed the same punch as anything in the first movie, especially the villains. Where the first movie had Kevin, That Yellow Bastard, Senator and Cardinal Roark, and someone else I’m likely forgetting, this movie double dips Roark with a few of his forgettable thugs, Manute, and Ava. And while Eva Green plays the sexually bold Ava very well, especially with the way that she essentially uses her nudity as a weapon, I had a hard time buying her powers of manipulation. Especially as her words make it sound like she’s a powerless damsel in distress, yet everything about her mannerisms, her posture, her way of speaking make it clear that she is the one in charge and would never be taken advantage of. It especially bothered me how quickly Christopher Meloni’s Mort turned, and ultimately didn’t seem to accomplish anything to further the story. I also didn’t feel like Johnny fit into the world of Sin City. It almost felt like he was a character from a different fictional universe coming for a visit into Sin City. He was too smooth and carefree for a town like this. And as for Nancy’s descent into becoming Max from Dark Angel, it was too overplayed and Alba did not pull off the dramatic moments at all, though I will say that I did like her look when she finally decides to go after Roark.

The look of this film is something that was really unique about the first Sin City. It was mostly high contrast black and white with the occasional moment of muted colors like when we first see Nancy dance or when there’s an important character in full color like Goldie. But it is not used nearly as well in this movie, where sometimes red blood gets splattered on Marv’s face and other times it’s the stark white blood spray. Goldie in her small role is shown in full color but so is a more minor character Marcy or a car. There were also several moments of dialogue that took me out of the movie because not only had I heard them in the trailer, but within the movie they felt like they were written specifically to be used for the trailer. Of course, there is still quite a bit here to enjoy. I feel like this is a movie full of great moments, like my favorite moment when Marv rescues Dwight from near death and is just talking about the car that he stole instead of using the one that they brought and at some point he just casually knocks a motorcycle cop off the road. In fact nearly every moment with Marv was an enjoyable one. Johnny also had some great moments within his story, like his scene with Christopher Lloyd, but it ultimately fell flat especially with his lackluster ending. In fact, none of these stories really felt like they ended with any sense of accomplishment. While each story ended with the character finishing their goal, none of the goals really felt like they mattered in the grand scheme of things, they all lacked any grand impact. And in the coming week or so, I’m now both looking forward to and dreading a re-watch of the first Sin City. I’m sure it will still be better than this one, but I can’t help but think that the memories of the sequel will mar the original in my mind. Until next time, this has been Bubbawheat for Flights, Tights, and Movie Nights.