← The Death of “Superman Lives”; What Happened?
Book Nights: Overtaken →

It was only a few months ago that the first Batman Unlimited movie came out to home video and it’s already time for the sequel. It’s a little tough to get behind this kind of movie that is inherently designed to market their toy line, and watching it with that in mind, it does exactly that in spades. With just two films, they introduce a large number of heroes, villains, and accessories. The first film introduced all the animal themed villains, while this one introduces all of the monstrous themed villains. Though the problem that I had with the first film carries over just as much with this film. I.E. there are no women outside of a single villainess Silver Banshee who I was never familiar with before seeing this film. Like Animal Instincts and last year’s JLA Adventures, this is very kid friendly and lighthearted as opposed to the typical hard PG-13 DC animation with their other Batman and Justice League animated films. Taken at face value, it’s harmless and entertaining enough, it’s just the whole concept surrounding it that rubs me the wrong way in more ways than one.

Looking just specifically at the plot, it centers around a group of the more monstrous Batman villains roaming around future Gotham causing general mischief. I did quite like the chemistry between Silver Banshee and Solomon Grundy, even though I never really understood what exactly Solomon Grundy was supposed to be. I’ve seen him here and there, but never really caught wind of his origin story or explanation, he’s just this hulk-like villain brute with zombie-grey skin. Anyway the group is rounded out with Scarecrow and Clayface with an odd Brooklyn accent and Joker coming in with the leader role. It is worth noting that Troy Baker does an excellent variation on the Mark Hamill version of the Joker here. The actual plan of the villains is a little harder to come to grips with. They kidnap a kid genius video game designer to create a Joker virus to wipe out all electronics in Gotham, including new-to-the-hero-party Cyborg. The group then rules the city in a very childlike manner, Grundy especially as he becomes sheriff and spends his time playing hide-and-seek with the officers. Meanwhile, Clayface becomes lord of ice cream or something along those lines. There’s also a super-advanced AI involved, but it basically means that Batman and company can no longer use computers and their own vehicles turn against them, including call back from the last film Ace the robot-wolf-motorcycle. 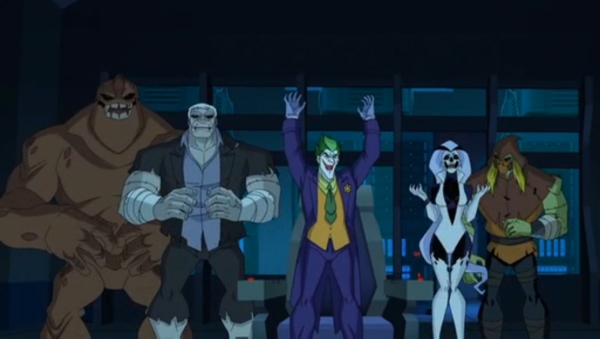 Essentially, the film follows the same format as the first film. It slowly introduces the villains, the heroes come together to fight them during these small heists, we eventually find out who the leader is and their grand plan, and the heroes eventually come together to defeat said villains. On the hero side of things it’s kept pretty much the same except they ditch the Flash in exchange for Cyborg, with Nightwing, Green Arrow, and Red Robin returning. Another minor gripe with the last film is addressed here when they clear up exactly which Robin it is when Alfred calls him Tim. Not that it was very likely that the generally disliked Jason Todd would have been Red Robin, but you never know. It’s also too bad that they didn’t feel the need to bring in a woman superhero over the course of two films.

The biggest upside is both the kid friendliness of the story as well as the humor throughout the film. There is a brief clip of a Looney Tunes cartoon on a background character’s phone and parts of the film continue that Looney Tunes vibe, especially the climax when Batman goes into the virtual world to fight the Joker in essentially the Matrix. You may be cool, but you’re not Batman riding a robot dinosaur shooting a laser cannon cool [see DVD cover]. There’s also some nice humor with Solomon Grundy pretending to be a pizza delivery man to sneak into a building full of security guards where he ate all the pizza and compliments his own acting skills. There’s also a fun modern touch of a kid wanting a selfie with Batman that gets called back at the end. Again, much of it is along the lines of more childlike humor but when it hits, it hits. As an adult watching this, it’s hard to look past the fact that it’s a giant toy commercial that doesn’t think girls ever want superhero toys. And just to prove the point, my daughter was excited for this film from the intro as she really liked the design of Silver Banshee and the Halloween motif, but once she became much more of a side character and the fact that it was Halloween was dropped, her interest disappeared. There’s nothing really wrong about this film, but it’s absolutely not necessary in any way, shape, or form. Until next time, this has been Bubbawheat for Flights, Tights, and Movie Nights.

← The Death of “Superman Lives”; What Happened?
Book Nights: Overtaken →