← It’s October, and that means Graphic Horror
Filmwhys #59 The Double Life of Veronique and Blade II →

It’s October and I’m kicking it off with my first Graphic Horror post for the month. After Marvel had a string of failures in their TV movies in the late 70’s and their one success with the Incredible Hulk, they also sold the rights to some of their other comics including their Frankenstein series and the Tomb of Dracula which introduced Blade to Toei Animation. Toei is probably most well known for being the studio behind Dragon Ball Z and Sailor Moon, but before either of them came this cheaply animated made-for-TV film. It was later dubbed and released in the US in VHS and Beta but has since gone out of print and isn’t available on DVD, though copies have made their way online. I of course watched the English dub and found it hilariously awful. There is so much going on in this film and very little of it makes any sense that it’s amazing to watch. I found myself laughing uproariously through much of the run time even though I did have to split my viewing across two nights.

There’s a few things to know about the original comic the Tomb of Dracula. It ran for 70 issues in the late 70’s, introduced Blade at some point, and apparently a large chunk of it was squeezed into this film. It’s always difficult to adapt a long-running series into a single film and this film really makes the worst of it. At various points in the film, Dracula is being opposed by: a cult of satanists, a trio of vampire hunters including a human descendant of his, Satan himself, God himself, a vampire woman he turned years ago, a rival vampire, and his dead baby turned into a grown avenging angel, all in the span of an hour and a half. Not only that, but in order to try and have this all make sense, there are seemingly countless pages upon pages of exposition in the dialogue. The only way the film expects you to know what’s going on is if one of the characters spells it out in rapid-fire ridiculous dialogue.

Dracula in all his “glory”

As far as some of the actual plot of the film, it’s essentially a modern day take on Dracula’s legend which turns him into a sympathetic character. Through various flashbacks and conversations with other people we learn that he was Vlad the Impaler, but before he impaled people he was the kind ruler of an idyllic kingdom. It was the constant assault of enemies on all fronts that turned him into the vicious warlord that people thought he was, and that was only to try and protect his kingdom and its people. He was turned into a vampire in order to be a slave of Satan, and after living for hundreds of years he found his way to America, specifically Boston, and found a chance for revenge as this satanic cult prepared to offer a bride to Satan. But when he stole the bride, he ended up falling in love. They have a child, but the child gets killed by the cult. And on an on from one crazy plot point to the next. There is so many things about the concept of this film that it’s difficult to put into words. The descendants of Van Helsing and Jonathan Harker recruit Frank Drake who they somehow know was descended from Vlad the Impaler before he became transformed into a vampire. Not only that, but there’s a scene where they test his fighting skills by having Hans, the old man in a wheelchair, attack Drake with his cane sword while being pushed by Rachel Van Helsing and it looks as ridiculous as it sounds.

There’s also this entire sub plot where Dracula and his satanic cult bride fall in love, have a child, the child dies, and then is resurrected by God in order to kill his own father. And yet Satan turns Dracula into a mortal so his son Janus decides that he can’t kill Dracula at that time because he isn’t evil while he is still mortal. Janus has his own powers that seem like the divine opposite of his father’s powers, like he can turn into a golden bird instead of a bat. But again, if that wasn’t convoluted enough the movie adds in yet another wrinkle that Janus’s mother actually had these Godlike powers and never knew about them until she suddenly shows up and protects Dracula from Satan. 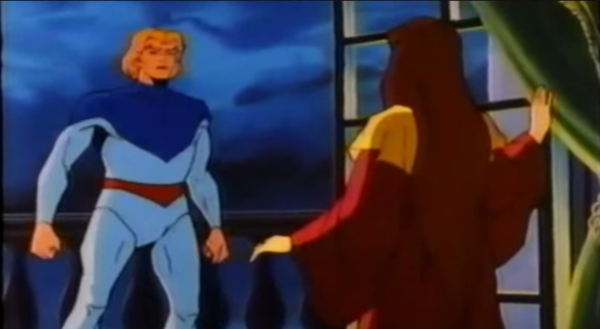 The most curious thing about this film is trying to understand what the demographic they were aiming for. The animation is very cheap, the dialogue is very poor and exposition heavy, yet it moves very quickly from plot point to plot point in the same way a kids cartoon of that era might, like a G.I. Joe or He-Man or the like. But at the same time, there is so much blood and violence that wouldn’t be appropriate for younger kids, as well as a group of zombie-like vampires and some very near nudity at one point where we see a vampire woman in the shower. It’s entirely ridiculous and convoluted, but just watching this film unfold and go from silly to crazy to complete batshit insane was completely worth it and it makes me very curious to see where they go with their completely unconnected follow up Frankenstein. Until next time, this has been Bubbawheat for Flights, Tights, and Movie Nights.

← It’s October, and that means Graphic Horror
Filmwhys #59 The Double Life of Veronique and Blade II →