While I haven’t been watching as many movies lately, I’m still listening to just as many podcasts and finding new ones all the time. This is another case where I did a #PodernFamily search to see what came up, though I’ve interacted quite a few times with these guys on twitter before giving them a listen. It’s another instance where it’s a bit of a stretch to call them a “superhero podcast” but comics and superheroes appeared to be a significant part of at least half of their episodes so I went with it. And again, if you run or listen to a superhero podcast that I haven’t reviewed here yet, I’d love it if you shared it with me to review in a future installment with my grading of: Subscribe, Unsubscribe, or Selected Episodes. On to the review!

Jake and Tom Conquer the World 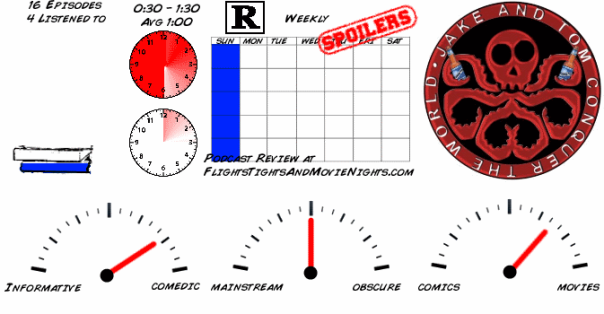 Website: DrunkenDorkPodcast.wordpress.com/
Episode count (as of 10-01-16): 16 + 80 as The Drunken Dork
Episodes listened to: 4
Episodes recommended to me by the podcast: Guest spot on Hydrate Level Four, the Lois & Clark Pilot, Episode 5: Special Guests: We Got Five
Release schedule: Weekly-ish on Sundays
Episode Length: 0:30 – 1:30, averaging about 1:00
Audio Quality: Clear
Language rating: R
Spoilers: Yes
Production format: A single conversation between two friends on various topics, occasionally with a guest or guests.

Jake and Tom have a discussion on various topics as noted by the show’s description with the occasional guest. There’s not any typical format, it’s more of a freeform discussion with a rough outline for their topic. Often some of the more entertaining parts of the conversation don’t have anything to do with the topic at hand, as one of the episodes I listened to had a fun little story about taking a couple mile walk through the woods on a vacation that turned out to be a big mistake. They also open up with what they’re currently drinking – a holdover from when they called themselves the Drunken Dork, I imagine. I didn’t end up listening to any of their episodes with a guest, but I thought the two of them have good chemistry with each other and are quite enjoyable to listen to. The topic of superheroes came up quite a bit, though that’s partly because I did cherry pick the episodes that I listened to, but it seems like they are definitely fans of the movies and whatnot.

Comics vs News vs Movies

Of the episodes that I listened to, there was a relatively even split between comics, news, movies, and other topics. They had a full show dedicated to reviewing Suicide Squad, they also had another episode (which I didn’t get around to) where they interviewed a comic book author, there was also a reference to a comic book series The Runaways, and a full episode devoted to general geek news from movies, TV, and if I remember correctly a little comics.

I’ve mentioned before that often with these superhero podcasts, there is something specific that I’m looking for and if the podcast doesn’t have that, I’m not interested. This didn’t have that exactly, but it covered a lot of other bases that I’m also interested in. Like they just had an entire episode dedicated to Kevin Smith’s filmography and I’m a big Kevin Smith fan, even though like them I’ve fallen off of my dedicated fandom and haven’t seen his last two films. They’re very fun to listen to and they seem like great guys. They’re always sharing and retweeting other podcasts on their twitter feed. As far as superhero podcasts go, they’re not quite the best, but for podcasts in general, they’re worth listening to.