Howard Lovecraft and the Frozen Kingdom

Howard Lovecraft and the Frozen Kingdom 2016

I’ve never been a huge HP Lovecraft fan, essentially the only things I know about his writing are that it involves a lot of madness and tentacle creatures and gave some inspiration to the first Hellboy movie and In the Mouth of Madness. It seemed quite unusual that these kinds of stories would translate to a comic book made for kids and that comic would then be turned into an animated movie complete with the voice of Hellboy in a small role even. When I initially saw the box art for the film several months ago, I dismissed it as one of those cheap knock-off movies that tend to mimic a popular movie from a few years earlier like Karate Panda or Dragon Flight School. And to a certain extent, that’s exactly what this is only there’s not really any movie that it’s trying to cash in on, it’s just a lower budget animated film that managed to get a few medium profile actors to lend their voices. It wasn’t a horrible experience by any means, but there also wasn’t much enjoyment to be had outside of a couple brief laughs.

One surprising thing about this film is the level of macabre detail there is on several of the characters. The film starts out by taking us to a mental institution, Howard himself has dark circles under his eyes, his mother has noticeable lines under her eyes, even Howard’s father has the pupils of his eyes slightly different sizes. When Howard gets to the frozen kingdom, the creatures there have a decent mix of Lovecraftian horror while still being family friendly. The main creature which some characters seem to imply is some type of avatar of Cthulhu itself, but Howard simply refers to as “Spot” after mishearing his name at one point as “Su-sussudio” is a very Cthulhu-esque creature with several tentacles coming out of its mouth, a head that feels like a squid, leathery wings, and one hand that’s simply a large tentacle. Spot is an odd sort of intelligent, he generally speaks in short, simple sentences but he also comes up with several complex words that belie his lack of intelligence.

The structure of the film is basically the stranger in a strange land typical of the Wizard of Oz and Alice in Wonderland. While he is warned by his institutionalized father to destroy the Necronomicon, he still reads from his father’s diary which brings him to this frozen land of madness. He gains his companion Spot, finds a group of helpful locals, and gets sent on a quest to retrieve another of his father’s journals by the local queen and her pack of weird looking minions. Much, if not all of it are inspired by the writings of HP Lovecraft, but it’s all given this sheen of kid-friendlyness to it where nothing really feels very scary. Even when it comes to the multi-eyed Shoggoth voiced by Ron Perlman. He is also tasked by the denizens of this frozen kingdom to be the one to help lift this curse of eternal winter. And by the end of the film, it appears that he has made progress even though we don’t get to see the full effects of the end of winter, it’s merely a comment by one of the characters that it’s starting to feel warmer. 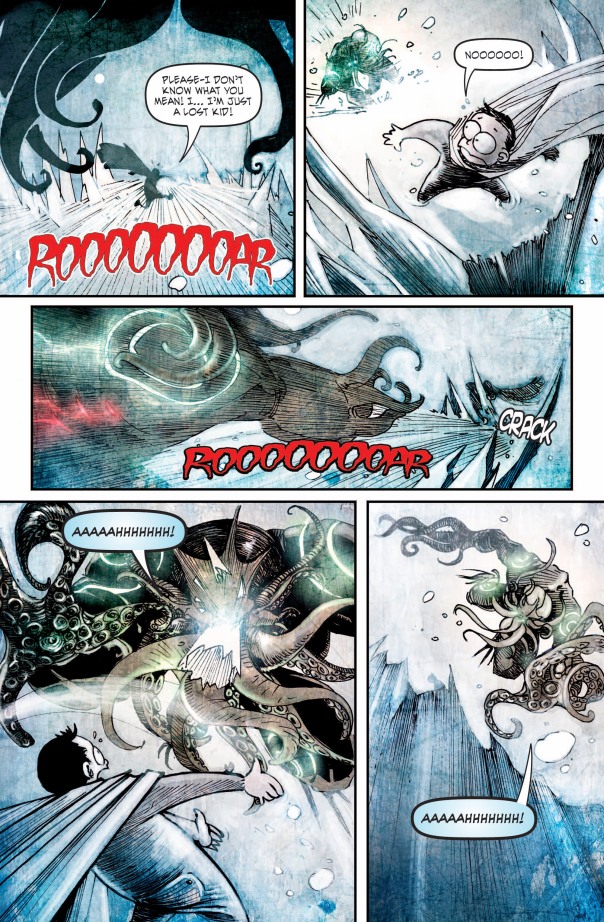 As with many of these fantasy world stories, it is very episodic. But unlike most other fantasy world stories, there isn’t much growth for Howard as a character. This doesn’t feel much like a coming of age where he learns to face his fears or grow up in some way. He begins the journey as a character that already seems prepared to face whatever is coming his way. His only initial flaw seems to be his fear towards his first encounter with Spot, but he very quickly gets over that fear to help save the creature and become friends. Every other challenge he faces with only a small amount of fear, but mostly bravery. Which is ok in some regards, but it’s disappointing because that means he doesn’t get the chance to grow as a character. He’s supposedly also learning more about his father, but that also amounts to mostly lip service and name dropping. Also, every challenge he faces is solved through the brute force of his companion Spot. All in all, the movie wasn’t incredibly annoying, but it wasn’t very deep either. There may have been a bit more for someone who is a fan of HP Lovecraft’s writings, but from someone who only knows vague hints of tentacles and madness it fell rather flat and confusing. It’s like a cash grab for a property that isn’t really set up to make a lot of cash through name alone. Maybe it’s a good adaptation, but all I can tell is that it’s just a basic kids movie about someone getting thrown into a random fantasy realm and it does not hold up to any of the classics in that niche. Until next time, this has been Bubbawheat for Flights, Tights, and Movie Nights.