Son of the Mask

After sitting through My Super Ex-Girlfriend, I thought I’d turn this into a mini marathon of bad superhero comedies. The Specials wasn’t horrible, but it wasn’t that great either. And today’s movie trumps the both of them by a longshot. It rightly has a place on my earlier list of 33 of the worst superhero movies ever made. It shares some of the same mythology as Thor, and shares some of the same backstory as the Mask, but it goes in a completely different direction to try and make it into a more kid friendly, and seemingly therefore brainless, movie. There was not a single joke that made me laugh, I did not care about any of the characters, and the cartoonish action was a stale rehash of the actual cartoons that inspired it. 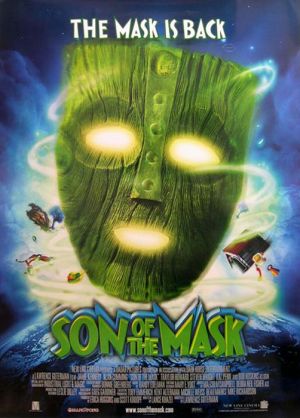 The basic idea of this movie is that several years after Stanley Ipkis threw the mask into the river, it washes up on a riverbank near where Tim Avery lives so his dog can find it and bring it home. Tim Avery is a cartoonist, and while there is no explicit mention that he is related to great cartoonist Tex Avery, the reference is definitely heavy. His wife wants to start a family, while he wants to create an animated show. The mask finds him during a Halloween party, which gives him both the job and the kid. Yes, he has sex while wearing the Mask, and that somehow creates a baby with the Mask’s powers. Of course, there’s also the subplot of Loki trying to reclaim the mask because his father Odin keeps yelling at him to. There’s also the long, boring, exposition scene at the beginning that features the return of Ben Stein from the Jim Carrey movie who goes on way too long spouting exposition from the Norse mythology. And the scene ends with a pretty weak payoff. 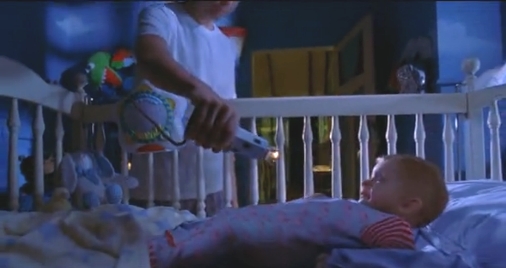 Who in their right mind thought this was funny?

I think one of my biggest problems with this movie was Jamie Kennedy. He is far and away no replacement for Jim Carrey. When he’s wearing the mask, if anything it actually makes him more boring. The song and dance number is also nowhere near the fun and catchiness of Cuban Pete. Not only that, but I thought his character was pretty unlikable. There’s one scene early on after his kid is born, and of course the kid immediately turns one and a half after being born, where he’s doing the typical new parent multiple evening feedings. Which is not only a very overdone scene, but it’s not helped that the kid they used looks way too old to still need multiple evening feedings. He places the bottle next to a lamp, and while half asleep, takes the top off the lamp, smashes the light bulb on his forearm, and tries to feed the still-lit, broken bulb to his child. Even with the added cartoon bug eyes from the kid, that does not make that funny, it makes him a horrible, horrible person. In fact, all of his early interactions with his kid make him unlikable. And all it takes for the baby to forgive him is getting attacked by Loki.

Another thing I had a problem with was the timeline of the movie. I understand that there are limitations on working with a kid, but it really bugged me how quickly they moved through the pregnancy to him being well over a year old, but every other part of the plot was at a standstill for those two years. Loki was no closer to finding the mask, Tim Avery in his new animation job still seemed like it was in the early planning stages, with no ground gained at all until the plot needs it to. And after all this time working as an animator, while his wife does whatever job she does, they don’t have any babysitter at all? Instead, when she leaves for a week, it appears to be the first time the baby is left alone with his dad. Not only that, but while he seems to have taken all the nighttime responsibilities for the kid, when she leaves, she treats him like he’s the kid’s babysitter, not his father. And Jaime Kennedy just spends the entire movie with a dumb look on his face.

But what all that setup is for is really just an excuse for some cartoon style action. Especially once the dog reclaims the mask and starts a rivalry with the kid. I also wasn’t really sold on the excuse for the kid’s inspiration for his powers, he’s sat in front of the television and watches old Flintstones and Looney Tunes reruns, notably imitating the Michigan J. Frog routine to try and make his dad crazy. Meanwhile the dog comes in and becomes a half-rate Wile E. Coyote, trying to kill the baby in order to regain his best friend’s affections. It also bugged me quite a bit that in this movie, the mask worked during the daytime. It was a big part of the original movie that the mask only had power at night. Even the cartoon action felt very derivative of the old cartoons without coming close to matching them. It ended up feeling like a cheap copy.

There wasn’t a single interesting character in this movie. As I mentioned, Tim Avery was unlikable, his wife was barely there, the kid and dog were cartoonishly annoying, Loki was petty and ineffective, and Odin was just a one-note yelling machine, inconceivably played by Bob Hoskins of all people. And the ending had an unnecessarily sappy note to it. And of course, my daughter Jena loved pretty much every minute of it, from the fart jokes, to the cartoon action. Hopefully her tastes will improve with time. Until next time, this has been Bubbawheat for Flights, Tights, and Movie Nights.