It’s finally time for me to begin assembling for the Avengers, and while many people try to forget this installment of the franchise and it was made before Marvel decided to make all the movies lead up to a big crossover movie event, it is generally considered that The Incredible Hulk is a sequel and not a reboot. So by this theory I decided to watch this version of the Hulk first to refresh my memory before heading into its sequel. On top of that, it’s a great chance for me to once again become involved with the LAMB and their Lamb’s in the Director’s Chair. This time around the director is Ang Lee who at the time seemed like a very interesting choice to take on The Hulk. He had just come off of his acclaimed and popular Crouching Tiger, Hidden Dragon and it was thought that he would bring a unique take on the Hulk, and he definitely did do that even if it might not have been a good thing.

I vaguely remember going to see this movie when it first came out, it was just a couple years after X-Men and it was a part of the superhero movie boom at the time. I believe it had moderate appeal and success and then as time went on it got a huge internet backlash. I remember liking it at the time, and watching it again it absolutely held my interest the entire way through, but a combination of all the hate I’ve read about the movie along with the undeniable fact that a lot of choices made in this movie were completely wrong, and I just didn’t enjoy it as much as I first did. I generally agreed with most of the complaints I remember hearing about this movie except for one: I thought the CGI for the Hulk in this movie wasn’t that bad, in fact it was quite good. I remember that at the time it was held up as the height of CGI detail and I thought it looked fantastic. The only time I had a problem with the CGI Hulk was during the leaping scenes, they just didn’t give him enough inertia or momentum and he just bounced unbelievably off the ground like he was a flea rather than a two ton Hulk. 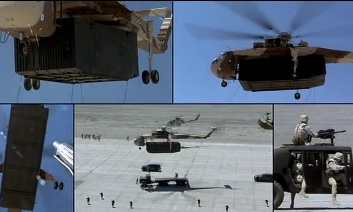 One of the biggest problems I had with this movie was the pacing. It dragged on way too long without making any progress. There was no reason that it should have taken 40 minutes before the Hulk made an appearance and fully halfway into the movie before the Hulk fought anything. Not only that, but throughout all that setup, hardly anything was really explained, it was just set up to be explained later. I don’t understand how there can be an hour of setup and there is almost no explanation of what happened to Bruce or his parents. The second half of the movie fares a bit better, but it never really moved past a casual trot. The movie clocks in at over two hours, but I think it could have been a much better movie if it was cut down to about an hour and forty five minutes if not shorter.

Ang Lee had a unique concept that he wanted to use split screens in this movie to give it a feel like a comic book. In theory it was a great idea and it had been used to great effect in the show 24. Unfortunately in this movie it was only used effectively in a couple scenes. In the rest of the scenes where it was used, it felt just like a gimmick rather than an effective storytelling tool. The last place that is needed to give a paneled effect is what felt like a five minute scene of Bruce Banner being transported across the desert. I doubt any comic book would have wasted the equivalent of two pages on that scene. There were a few scenes where I really appreciated the visual flair that didn’t even use the paneled effect, like the scene where Bruce is looking at an old picture which comes to life as it becomes the memory of when the picture was taken. There is also a great scene where the Hulk is falling from the sky and he has a dream of looking in the mirror and Bruce sees the Hulk. Moments like that were absolutely brilliant, they were just too few and too far between. 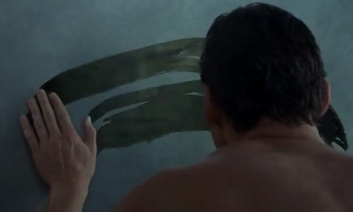 This was actually a cool scene, and it made my wife jump too.

The cast for this movie was kind of hit and miss. I’m a fan of Jennifer Connelly and I couldn’t take my eyes off of her any time she was on camera. I thought she played a great Betty Ross. And her father General Ross was played by the great Sam Elliott who was one of the few things I loved in Ghost Rider and he is just as good in this movie. From what little I know of the Hulk from the comic books, I know that General Ross is one of the Hulks biggest adversaries, but in this movie he is very sympathetic. Every one of his decisions in this movie is perfectly justifiable based on his character, his duties, and the love for his daughter along with his near inability to show it. Unfortunately I don’t think Eric Bana was the best choice for Bruce Banner. Every time he got angry, he just looked like he was going to have a seizure or a stroke. And when he wasn’t angry, he wasn’t much of anything else at all. And finally there’s Nick Nolte as the completely mental David Banner who goes from the verge of craziness to completely over the top crazy, all the while looking just like his famous mug shot photo.

This is seriously the final fight in the movie. It looks like a giant fart bubble.

There is just a lot of bad decisions associated with this movie, and I came into it wanting to like it again, but I just couldn’t get past all of the problems I kept seeing. I haven’t even mentioned the fact that the Hulk fights a trio of mutated dogs including a poodle. Not only that, but he kills them by smashing them to a green pulp right in front of Betty Ross. And that’s the scene where she’s supposed to feel sympathetic to him. Even if it’s a mutant dog, I find it hard to find sympathy for a green monster that just smashed three dogs to death in front of me. And the climactic battle with his father is resolved when he gets really really angry, feeding his anger energy to a giant jellyfish looking bubble that gets hit with a missile or bomb and evaporates into a green mist. I wish I were kidding. Thursday I’ll be taking a look at the much better sequel to this movie before I assemble the rest of the Avengers. Be sure to come back tomorrow as well when I try out a new weekly feature. Until next time, this has been Bubbawheat for Flights, Tights, and Movie Nights.