← FTMN Poll: What superhero/comic book movie are you looking forward to in 2013?
Watchmen →

Tales of the Black Freighter/Under the Hood

Watchmen: Tales of the Black Freighter/Under the Hood 2009

Even though I’ve watched the Watchmen already, I’m not quite done with it enough to write a review of it yet. But since this is presented as somewhat of a stand alone feature, I’m going to go ahead and give it it’s own review. One of the first things I realized after watching this is that even though this is presented as somewhat of a companion piece to the Watchmen, it’s really much more like a bonus disc to the movie that you can buy on its own. If you’re a fan of the movie, it’s worth picking up, but the actual bulk of the movie is extremely short clocking in at just under half an hour. It felt much more like an animated episode of Tales From the Crypt. That said, it also felt like a really good episode of Tales From the Crypt. It’s dark, twisted, and you’re never quite sure where it’s going, although when it gets to the actual twist, its fairly obvious. There are a couple other things on the disc that I didn’t even realize were on there at first. The biggest thing is the not-quite-a-mockumentary “Under the Hood” which takes a look at the autobiography of one of the original Minutemen within the world of the Watchmen, along with brief looks at the other members of the original Minutemen. It’s interesting in that it fills in a lot more information for characters we briefly see in the Watchmen, but I wasn’t overly fond of the overall presentation.

But first let me go back to Tales of the Black Freighter, which is actually a comic book within the alternate 1980’s timeline of the Watchmen. The theory is that in a world where superheroes actually do exist, superhero comic books wouldn’t have become as popular as they are today. Instead alternate stories like Pirates or Fantasy books would be the norm. Tales of the Black Freighter is one of those pirate comics. In the original comic, panels from the Black Freighter would often be interspersed with the main Watchmen storyline, which makes me curious to both read the original book and watch the Ultimate cut of the Watchmen which apparently also attempts to do that. But I’m getting away from the point, in this movie a captain of a ship has been attacked by the Black Freighter, which is something along the lines of the Flying Dutchman or Davy Jones’ ship or any other wraithlike pirate ship of the damned. The captain ends up being the only survivor of the attack and he is shipwrecked on an island with the corpses of his crewmates. He eventually manages to get back to town, but the journey has driven him to the point of madness.

The captain never loses him like Tom Hanks did either.

One of the first things that struck me was the style of animation. Nearly everything in animation in the past several years has been drawing more and more of an inspiration from Japanese anime designs with stylized features and large eyes. This has absolutely none of that, making it have a distinctly American feel to it which I really appreciated. It also doesn’t hold back when it comes to the violence and gore. Gerard Butler is actually the voice of the captain and he does a great job essentially carrying the entire episode. The story really drew me in right from the start, and my only disappointment was that the already short half an hour felt even shorter due to how quickly it moved along. If you’re a fan of the Watchmen, it’s a must see, and if you’re a fan of Tales From the Crypt, it’s worth a rent or if you can find it in the clearance rack like I did it’s worth picking up as long as you know what you’re getting. 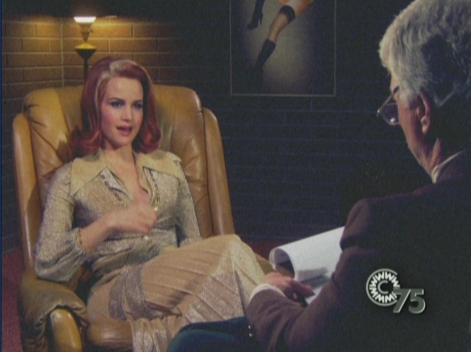 Culpepper talks with the Silk Spectre

Under the Hood, not to be confused with Under the Red Hood, is a pseudo news magazine show done within the world of the Watchmen and gives a lot of backstory to some of the early heroes that are often only briefly mentioned in the Watchmen movie. At almost 40 minutes, this is actually longer than the supposed feature of the DVD based on the title. It primarily consists of an interview with Hollis Mason, the original Nite-Owl who wrote his autobiography “Under the Hood” which is a reference both to the fact that he was a car repairman as well as the fact that he was a superhero wearing a hood as part of his costume. I found the entire setup to be a little odd. It’s based around a fictional show called “The Culpepper Minute” which is from the Watchmen’s alternate 1985, but it’s mostly a look back at when the show “originally” aired in 1975. The cuts back and forth between the two time periods were rather odd, and there was little real entertainment value besides the oddness of the classic commercials which felt like they belonged in the 1975 version, but would make more sense to have been from the 1985 version. The first one is fake commercial for a Veidt line of perfume, but the second two are real classic commercials. The entire conceit of being a show within a show was overly convoluted for such a short program, and as a result, the 1985 segments really had little value at all. I think it would have flowed better to have just been set in 1975 in the first place. I did find bits of it very intriguing, and I enjoyed the use of the minor characters from the movie, but taken on its own, it’s way too dryly presented for most people to enjoy it. Unless you’re a die-hard fan of the Watchmen *and* are curious about the original Minutemen, this is easily skippable. I am curious if this is fit into the ultimate Watchmen cut, but I suppose I’ll find that out later. Until next time, this has been Bubbawheat for Flights, Tights, and Movie Nights.

← FTMN Poll: What superhero/comic book movie are you looking forward to in 2013?
Watchmen →