← Filmwhys #4: The Deer Hunter and Super
Tiger and Bunny: The Beginning →

This movie was sort of billed as a sequel to the animated Superman/Batman Public Enemies, although it really is a stand-alone piece with only a brief callback to President Luthor’s impeachment to tie it to the previous movie. I hadn’t really heard much about this movie compared to some of the other DC animation so I really didn’t know what to expect, other than Darkseid considering the title of the movie is Apocalypse even though they went with the traditional spelling of the word rather than the typical comic book spelling of Apokolips. But even with the Superman & Batman title, this really could have been called Supergirl: Apokolips, as she is the main focus of the movie and Batman doesn’t get much screen time at all. But I am a big fan of Supergirl as a character so I really enjoyed this movie and it quickly rose as one of my favorite DC animations. From the great tone that’s set early on to the amazing action sequences towards the end, it’s really an all around great movie and one to check out if you haven’t seen it yet. 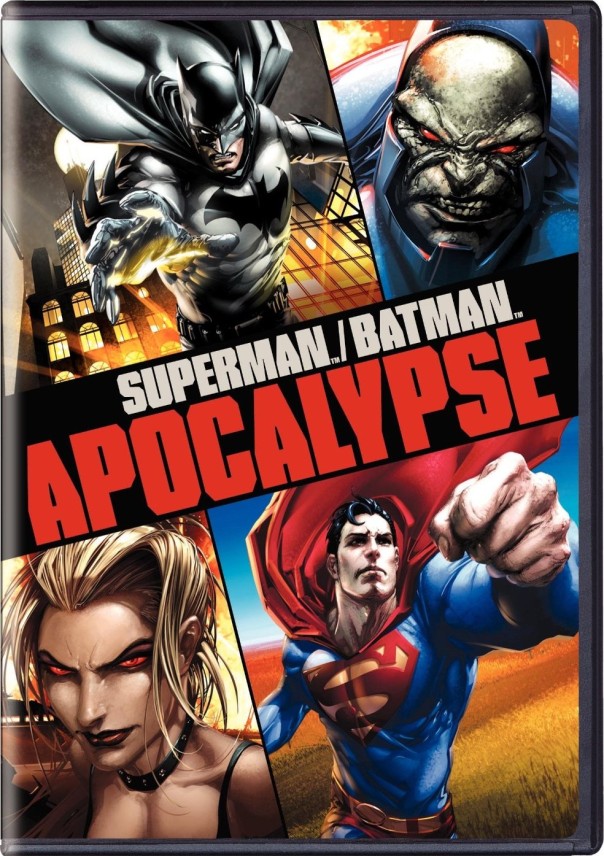 I think the biggest selling point for me about this movie is by far the dialogue. There are so many great Whedonesque jokes in this movie that had me laughing, not only that but there is a great familial feel to the relationship between Kal-El and Kara. It’s helped by the fact that this is another movie where Tim Daly and Kevin Conroy reprise their roles as Superman and Batman. And they are joined by Summer Glau, probably best known as River from Firefly, as Supergirl. Another recent animated movie featuring Supergirl was Superman Unbound, and while I thought the character was great in that movie, Glau really knocked it out of the park in this one. I loved the early scenes where she was acting very naïve and speaking Kryptonian, something that I thought was an excellent touch and also something I can’t recall having been done that way before. There was also a great scene where she and Clark go shopping where she takes on the typical high school girl role, and towards the end when stronger emotions come into play, she handles herself just as well.

One complaint I often have with these movies is the runtime, they almost all clock in at 75 minutes which often feels extremely short. Many of the movies pack so much into the runtime that they feel like they are rushing through the story, trying to pack as much into the movie as possible so that it all feels too underdeveloped. I think this movie really hits that balance right. There is a lot of stuff going on, but it all feels like it’s given enough development that it doesn’t feel as rushed or as packed as some of the other titles, like All-Star Superman especially. There’s a few moments that are a little too obvious, but there are also some nice little surprises here and there. 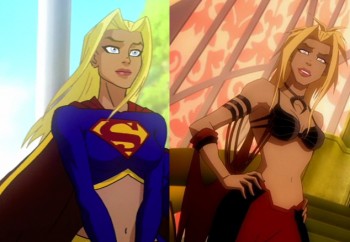 The voice acting in this movie is a real standout. Besides the three main heroes, the voices of the villains are quite good as well. My favorite had to have been Ed Asner as Granny Goodness, he just has such a great voice and channels the right tone. Darkseid is another great voice with a deep smooth undercurrent of menace and yet always calm. The rest of the characters were good as well, though there weren’t any other stand outs. Before watching this movie, my favorite action sequence in DC Animation was the battle between Batman and Superman in the Dark Knight Rises part 2, and while this doesn’t top that one, it comes in a pretty close second. Not only that, but there are two great action scenes, not just one.

While I feel like I can’t say enough good things about this movie, I actually find it hard to point out anything else specific to write about. There are a couple downsides to the movie, but I personally felt they were both minor. One is the character that becomes “evil” and uses it as an excuse to dress extra-sexy, although I think that this was at least set up earlier in the movie that she does have a tendency towards dressing that way when left unchecked by Kal-El acting as her father figure. The other is the over-awesomeness of Batman. He’s there alongside these other super powered beings and he holds his own in terms of strength rather than ingenuity. He does show some great resourcefulness as well, which I enjoyed, but I did have problems with some of the fighting sequences involving Batman. Aside from that, this has quickly become one of my favorite DC animated movies right alongside Dark Knight Returns and Under the Red Hood. It’s worth checking out if you get the chance to. Until next time, this has been Bubbawheat for Flights, Tights, and Movie Nights.

← Filmwhys #4: The Deer Hunter and Super
Tiger and Bunny: The Beginning →