← Batman and Mr. Freeze: SubZero
Batman: Mystery of the Batwoman →

The Haunted World of El Superbeasto

The Haunted World of El Superbeasto

It’s not even halfway through the month and I’m already at my final fully animated film aimed towards grown ups until the Killing Joke comes out later on this month. And unfortunately, like Lady Death, this one fell flat for me though for completely different reasons. It actually reminded me quite a bit of Jay and Silent Bob’s Super Groovy Cartoon Movie as it had a very similar juvenile sensibility only this was much more liberal with the nudity and gore which makes sense as it was directed by Rob Zombie. Straight up comedies are occasionally difficult to review objectively because humor is such a subjective thing. But when it came to my sense of humor and this movie’s sense of humor, they only lined up about 3% of the time. The rest of the time I was either cringing at the jokes made at the protagonists expense, or marveling at how they managed to get Paul Giamatti and Rosario Dawson in these roles. There was plenty of horror homages and felt like it was trying to recapture some of the early Ralph Bakshi animation, but it just fell completely flat for me.

We’re introduced the the world of Superbeasto where he is an actor and director casting for a new movie where he tosses out older actresses who are caricatures of well known actresses from history only they are caricatured to the point of grotesqueness. Of course, he picks the most young and curvaceous women with no regard for their acting ability and we soon find out that the casting is actually for a porn. Not only that, but for some reason when the full moon comes out, the two women turn into monsters that Superbeasto has to kill. So right off the bat, our protagonist is a sexist, egotistical killer. Not exactly the guy you want to get behind in a movie like this, and it doesn’t get any better. Through the entire film, Superbeasto is completely self absorbed and only interested in getting himself laid or getting himself an acting job. 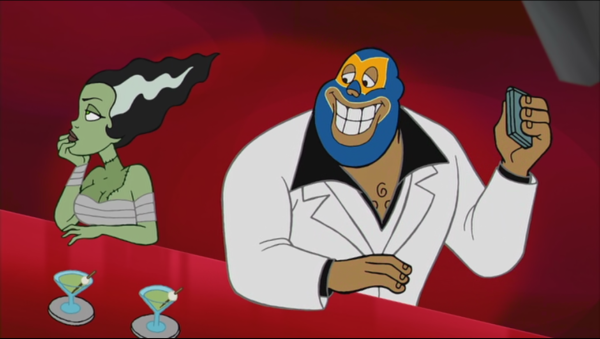 Our other main character is Suzi X and is much more like a typical action hero. She wears an eye patch, has an arsenal of weapons, and a robot companion who can transform into vehicles, carries plenty of gadgets and utilities for her, and is also in lust with her. It’s the butt of many different jokes where the robot is constantly sweating while staring at Suzi X’s assets, often gets an extendable cannon erection, and later on transforms into a car where he can grope Suzi’s ass while she steers with his penis analogue. She does at least have one of the best musical numbers during her completely unrelated side mission where she is stealing Hitler’s head in a jar while being chased by an army of Nazi zombies. The chase song is completely literal where the lyrics comment on what is actually happening on screen. She’s also voiced by Rob Zombie’s wife Sherri Moon Zombie and actually does a decent job. She really has a voice fit for cartoons which is surprising that she hasn’t gone on to do any other voice roles.

From the original Superbeasto comic, written by Zombie.

Throughout the film, there’s almost always one of two things on screen, and usually both: cartoon nudity and horror homages. In the strip club that Superbeasto goes to, it’s filled to the brim with caricatured horror movie icons like Jack Torrence from the Shining, and the chestburster alien from Alien among a couple dozen others, some are quite recognizable, others less so, and he even manages to get some inside homages from his own original horror movies. The nudity itself seemed like it was played more for comedy than sexuality, especially when we get to the strip dance of Rosario Dawson’s foulmouthed character Velvet Von Black. During her dance, she sticks her thumb in her mouth and basically blows up her breasts and buttocks as if they were balloons and teases Superbeasto so he rushes the stage with a visible erection only to be knocked to the ground by her endowments.

The villain side of things is a little bit better, though only for the spirited performance by Paul Giamatti. His plan is quite a bit on the fantastic side of things where he’s seeking a woman with the number of the beast marked on her body so he can marry her, have sex with her, and become a powerful demon in the process. Somehow. His minion is a large gorilla with a screw in the top of his head that apparently makes him smart, but only while it’s in there, something that really only comes into play for a threat and a later gag at the end. Another moment of humor that connected was when the gorilla was sent out after Velvet, he has to take the elevator where the frenzied rush of the entire movie is stalled with a very Droopy Dog inspired elevator operator who attempts to make small talk with the creature. It was entertaining every time it was used, though it was undercut during the ending with a jump back to the movie’s traditional style of random nudity and nonsense.

Overall, this is a movie that just doesn’t work on very many levels, unless you fall into its very specific sense of humor. It tosses a lot of horror genre imagery with boobs and butts everywhere you look, but none of it is really presented in a sexualized way, even when the music itself comments on a catfight between two women ripping their clothes off with the lyrics “It’s ok to masturbate to cartoons”. It is worth noting that the original music made for the movie was done by Chris Hardwick’s project Hard and Phirm with Mike Phirman and this film came out just a year before Hardwick started Nerdist. The plot doesn’t make a whole lot of sense, and it’s even worse that the protagonist is someone you don’t care about. Even the villain who’s named Dr. Satan gets a bit of sympathy because he was bullied by Superbeasto in high school and essentially gets bullied by him again at the end. It has bizarre, Ren and Stimpy-esque imagery at times, like Beasto’s overweight uncle wearing a thong who then turns around and lets out a horde of rats from his ass. If that kind of joke sounds like your sense of humor, it might be worthwhile to check this film out, for everyone else I’d say to skip it. Until next time, this has been Bubbawheat for Flights, Tights, and Movie Nights.

← Batman and Mr. Freeze: SubZero
Batman: Mystery of the Batwoman →