← Why are there so many bad superhero movies?
Superhero Shorts: City of Heroes Incarnate →

This movie wasn’t on my original list of movies to watch for this year, it’s not a traditional superhero movie, and I personally considered it more of a sci-fi movie. But I recently read what was originally intended as an April Fools joke at Fog’s Movie Reviews as one of his Movies That Everyone Should See. He thought that it wasn’t that great of a movie with too much cheese and too much violence, but he wrote the article very seriously expecting the commenters to balk at the movie’s inclusion alongside classics such as Citizen Kane, Big, and Stand By Me. But instead of balking, the comments heartily agreed with the inclusion except for a few outliers who realized it may have been an April Fools prank. It definitely made me want to see it, and so I did. As I mentioned, I was initially reluctant to include it, but it did spawn a comic book series, and when compared to a superhero like The Punisher, he’s got a better costume, similar firepower, and more of what could be considered super power. So here we are.

In case you’re not familiar with the specifics of Robocop, it’s set in the near future where the police is privatized by a corporation instead of the government, robotics are a few big steps farther along then they are now, and the corporation wants to use robotic police enforcement. Unfortunately the first prototype fails catastrophically during an early test, making way for an upstart exec to step in and offer their contingency plan using a robot with a human component for less chance of failure. Luckily they get their “volunteer” who happens to be a cop who shortly gets himself gunned down in the most violent way possible. He then becomes a strong asset to the force, but things go wrong when he begins to remember his former life and the events surrounding his death lead him back to the company who created him in the first place.

They're practically twins, right? Only one's a robot.

I feel like I’m going to be referencing The Punisher a lot, especially War Zone. And while I really did not like War Zone and I really liked Robocop there are just too many similarities for me to ignore them. Robocop was known at the time for its body count and extreme gore. So much so that it initially got an X rating from the MPAA. Watching it now seems totally tame compared to the level of violence and triple the body count in War Zone. I can’t exactly place my finger on why I disliked the gore so much in War Zone, yet in Robocop it didn’t bother me. I think part of it may be that most of the time in Robocop, the violence was caused by the villains rather than the hero. While Robocop did kill several people, the deaths he caused were much less likely to be showcased as a gore-fest. It could also partly be the fact that I’m just partial to the squib and prosthetic style of cinematic gore rather than the CGI style of cinematic gore.

There’s also the similarity that both Frank Castle and Murphy were left for dead by those who were to kill them, and they both took up a new identity and sought revenge on the ones who killed them. But where The Punisher voluntarily gives up his identity as Frank Castle in favor of his new identity as The Punisher, Murphy’s identity is taken away from him and he is forced to become Robocop by the OCP corporation who built his body, erased his memories, and gave him new programming. But by the end of the movie, he ultimately identifies himself by his real name rather than by Robocop, regaining his identity rather than abandoning it. 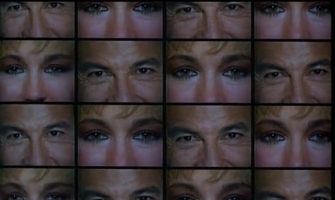 I just thought this was such an odd choice for a news program opening.

Moving away from The Punisher comparisons, I enjoyed this movie a lot. I enjoyed all the TV clips interspersed throughout the movie, which was something I also liked in another movie by the director Paul Verhoeven: Starship Troopers. In fact, when I tweeted that I was watching this movie, I received four separate replies quoting something from the Benny Hill-esque segment played several times during the movie “I’d buy that for a dollar!” I thought these clips added the right amount of comic relief without forcing it onto a goofy side-character or into the lines of one of the main characters.

The look of Robocop is pretty iconic with the visor and robotic body, and even when he takes his helmet off it looks fantastic. But somehow even through the slow robotic delivery of lines, the humanity of the character managed to come out without being overly sentimental. I appreciated the fact that the memories of his family weren’t played up with swelling music and slow motion, they felt a lot more like real moments in someone’s life. I also liked the fact that he never came face to face with his wife and son in the movie, it wasn’t needed, and the brief scene where he asks what happened to them was the right amount of information for this movie.

If this had been a Michael Bay movie, he would have exploded for no reason.

There were some pretty memorable villains in this movie, Red Forman as the head of the gang was great even though I often was waiting for him to call someone a dumbass. I also enjoyed seeing a young Ray Wise who I was familiar with from his role as the devil in the TV series Reaper, even though most of the gang aside from their leader weren’t anything special. The ruthless senior vice president of OCP was also pretty impressive as the arrogant yet ruthless exec who would do anything to get his way. The one weak point was the ED-209. The look of the mindless robotic cop prototype was fantastic, as was the stop motion animation. But the biggest problem for me was the sound design, it made no sense to me that they would have used animal noises for a robot and when it was ultimately defeated by falling down the stairs, it was just groan inducing to see it flailing and squealing like a pig. My only other real gripe with this movie was the fact that Robocop was completely bulletproof any time he dealt with the thugs, but the police managed to do an awful lot of damage to him. I understand that he would have gotten damaged by the increased firepower of ED-209, but the police afterwards didn’t seem to have any stronger firepower than the shotguns used earlier in the movie that were completely harmless. But aside from that I really had a great time watching this movie, coming up on Sunday I’ll be watching The Green Hornet. Until next time, this has been Bubbawheat for Flights, Tights, and Movie Nights.

← Why are there so many bad superhero movies?
Superhero Shorts: City of Heroes Incarnate →