← Batman vs. Robin
Flights, Tights, and Movie Nights is going to C2E2! →

This post is for the Great Villain Blogathon hosted by Silver Screenings, Speakeasy, and Shadows and Satin. For my part, there are plenty of great villains out there that I could have picked from, but in the superhero universe I don’t think there is any greater rogues’ gallery than the ones that live in and around Gotham city, so I decided to make a top 10 list of Batman’s greatest foes that have graced the silver screen or the home video screen. Yes, I am including the DC Animation direct-to-video films but I’m not including any of the television series, animated or otherwise. So here… we… go! 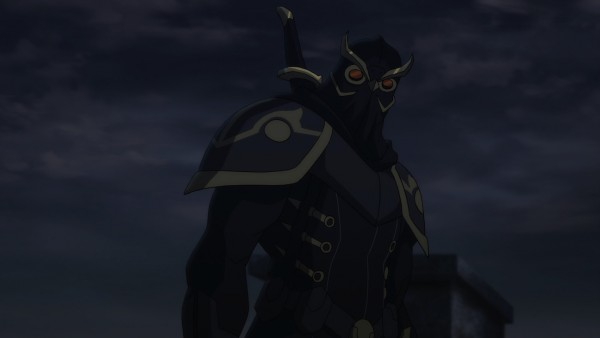 Film: Batman vs. Robin – This is a very recent entry as the movie he appeared in just came out on DVD yesterday. He’s the head of the soldier branch of the Court of Owls: a secretive organization made up of Gotham’s rich and powerful who seek to control the city. He was the son of an abusive cat burglar who turned on his father at a young age only to be raised by the Court of Owls as an assassin. Through the course of the film, he ends up being a pseudo-father figure to Batman’s actual son Damian Wayne. It makes sense to have a villain of Batman resemble an owl which is one of the few predators that hunt bats, which will come into play again later. He even follows through with his own twisted ideals to the very end. 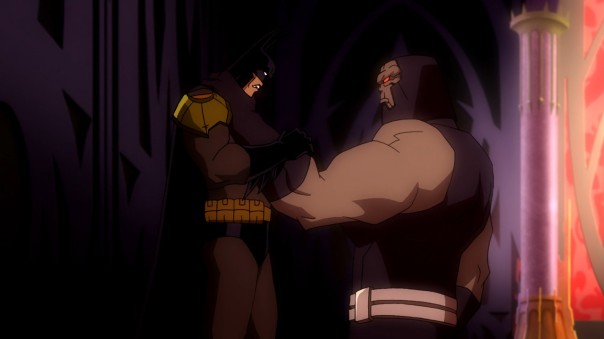 Films: Superman/Batman Apocalypse, Justice League: War – While Darkseid is typically more of a Superman and/or a Justice League villain, Batman does manage to play a major part in defeating him. He is one of the most powerful villains in the DC Universe, though his major power are these relatively ridiculous Omega beams which are basically homing laser beams that only move in right angles. While he is one of the most powerful villains, he’s also one of the least interesting as he generally just floats around and acts like nothing can defeat him, and then is surprised when he is.

Films: Assault on Arkham – I’m not ashamed to admit that Harley Quinn is my favorite Batman villain. She’s crazy, she’s sexy, and she dresses like a playing card, what’s not to like? The main reason why she isn’t higher on the list is because she’s not really a big threat to Batman, she’s much more of a nuisance. This movie really showcases a bit of her deviousness when she plays off being a jilted lover to the Joker, and yet she’s actually creating the means for his escape. Brilliant. 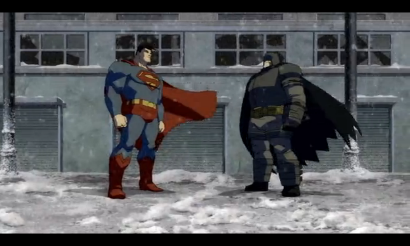 Film: The Dark Knight Returns Part 2 – This might be a little bit of a stretch to call him a villain, but in the timeline of the Dark Knight Returns he is definitely an opponent of the Dark Knight. And of course he will be again, likely briefly, in the upcoming Batman vs. Superman: Dawn of Justice. And while it really is a bit of a stretch to think that Batman in a mech suit could really prove to be any sort of match for the Man of Steel, even if his heart might not entirely be in it, this film really milks this fight for all its worth, and for that spectacle alone, I had to include him in this list. 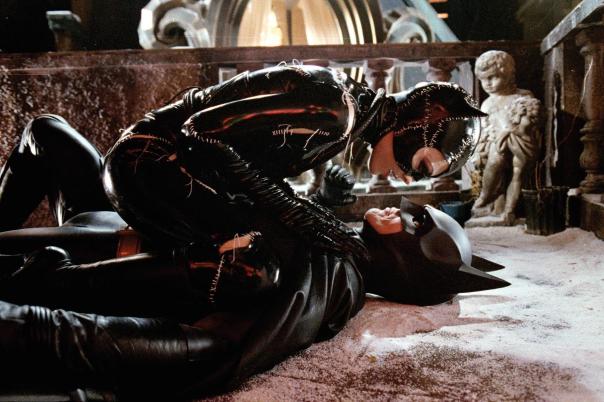 Films: Batman Returns, The Dark Knight Rises, Batman: Year One, Batman: The Movie – And we finally get to our first live action villain! As far as Catwoman goes, I must say that I like Anne Hathaway’s overall performance and character better, but I like the look of Pfeiffer and her chemistry with Keaton better. I also have to give a quick shout out to Lee Meriweather who also makes tight leather look pretty good. Anyway, Hathaway never gets a line like “Mistletoe is deadly if you eat it, but a kiss can be even deadlier if you mean it.” And those high tech cat ear goggles don’t hold a candle to the stitched together leather/vinyl/rubber/whatever catsuit in Batman Returns. It helps that she is more than a little bit crazy rather than just a very well trained con artist.

Film: Batman: Under the Red Hood – This was one of the first animated films where I really started to think that DC Animation was telling stories for adults rather than just for kids. They’ve gotten a lot darker over the years, but this was one of the first that really dealt with blood and death with one of the darker moments of Batman’s history with the death of Jason Todd. The Red Hood was one of the several vigilantes in Gotham that took things too far, he killed some of the criminals, and worked with the others. And to top things off, he ended up being Jason Todd himself, resurrected by Ra’s Al Ghul in the Lazarus Pit only to come out wrong. It’s a great story, and he’s a great sympathetic villain when all is said and done. 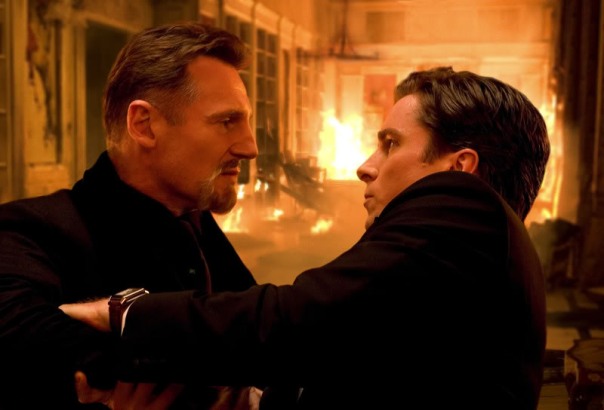 Films: Batman Begins, Batman: Under the Red Hood, Son of Batman – While he appeared in a couple of the animated films, he wasn’t much of a villain in either of them so I will be focusing on his appearance in Batman Begins. He is the interesting case of the villain who initially started out as Batman’s friend and mentor, teaching him the ways of the League of Shadows under the guise of being Ducard. And while Nolan’s universe did away from the Lazarus Pit, he did find a way to have Liam Neeson briefly return for the Dark Knight Rises as a memory. But he is one of the most powerful villains as the leader of the League of Shadows, one of the few who knew Batman’s secret identity and one of the first villains that he let die in a move not entirely fitting with his character. 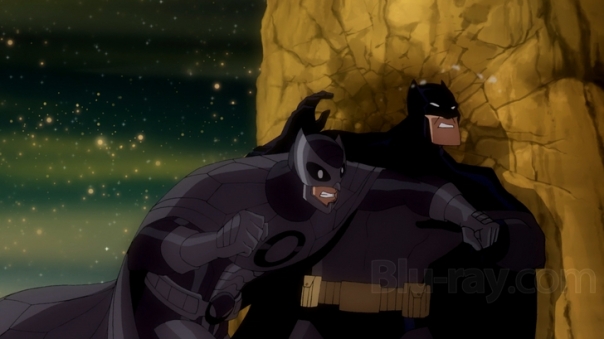 Film: Justice League: Crisis on Two Earths – One of the only parallel dimension villains on this list, Owlman comes from an alternate Earth where he is the analogue of Batman in his world, only he and the rest of the Justice League analogues are villains and part of the Crime Syndicate. And while he isn’t the leader, he is the one who masterminds the overall plan that would destroy the entire multiverse. Certainly a step up from robbing a bank. It helps that he is voiced by the incomparable James Woods. While the film itself does lack a little something to make it spectacular, it’s a fun film and Owlman is one of the more memorable parts of it. 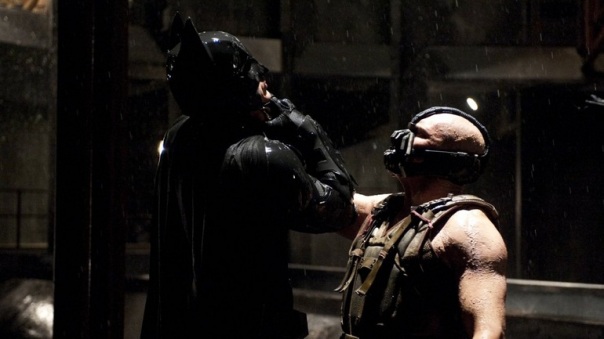 Films: Dark Knight Rises, Batman & Robin – Getting close to the end there just has to be a mention of Bane. The way he played off of Poison Ivy was just incredible. Of course, I’m joking and the actual Bane that makes this list is the one played by Tom Hardy in Christopher Nolan’s Dark Knight Trilogy. While I do think that the Dark Knight Rises is the weakest of the three films, there is still quite a lot there to impress, and one of those things is Hardy’s Bane performance. He is intelligent, strong, and determined. Not to mention memorable, while it may have seemed like an odd choice for him to have that mask and accent, it’s not something that is easily forgotten. Bane makes an impression, and it is a strong one. He also happens to have the entire city of Gotham under his thumb for months on end. Impressive doesn’t even begin to describe it. Films: Batman, The Dark Knight, Batman: Mask of the Phantasm, The Dark Knight Returns, Batman: Under the Red Hood, Assault on Arkham, etc – When I started this list, I imagine that there was little doubt as to what villain would make the number 1 spot. Out of his entire rogues’ gallery there is one villain used more often than any other, and that is the Joker. And while there are many different incarnations, the ones that I want to focus on for this list are Mark Hamill’s portrayal in Mask of the Phantasm, Jack Nicholson in 1989’s Batman, and Heath Ledger in the Dark Knight. They all have their place on this pedestal and they are all worthy of it. The Joker is such an interesting character, above all else he just wants to see the chaos unfold around him and have a little fun while he’s at it. He can be a bit more on the psychotic side of things like in the Dark Knight, and he can be a bit more on the silly side of things like in Tim Burton’s Batman. But there’s always a sense of chaos while at the same time there’s this incredible intelligence behind the chaos that makes it that much more terrifying.

I hope you enjoyed this list as much as I enjoyed making it. There were a few villains that I am disappointed that I had to leave out for one reason or another, I’m a big fan of Clayface and the Riddler, but Clayface has yet to make a notable appearance in a movie, and the less said about Jim Carrey’s Riddler the better. Until next time, this has been Bubbawheat for Flights, Tights, and Movie Nights.

← Batman vs. Robin
Flights, Tights, and Movie Nights is going to C2E2! →