I’ve viewed and reviewed a lot of DC Animation movies, but I haven’t gotten around to nearly as many Marvel Animation features. There aren’t quite as many of them, and they aren’t quite as high quality as their DC counterparts, but they are still often times an enjoyable diversion. I saw Planet Hulk for the first time a couple years ago when I was on a big animation kick and was going through most of the Marvel and DC Animated titles that were out at the time, and of the Marvel releases, this one was my favorite, even though there was one major problem I had. This movie is Planet Hulk, and of course the Hulk is the main character in it, but it is not the Hulk that I’ve come to know. The story is not what I would expect the Hulk to fit into, and I don’t recognize any name in the voice cast outside of Kevin Michael Richardson. But it still manages to be a fun watch and worth a look while you’re waiting for the next DC title to come out. 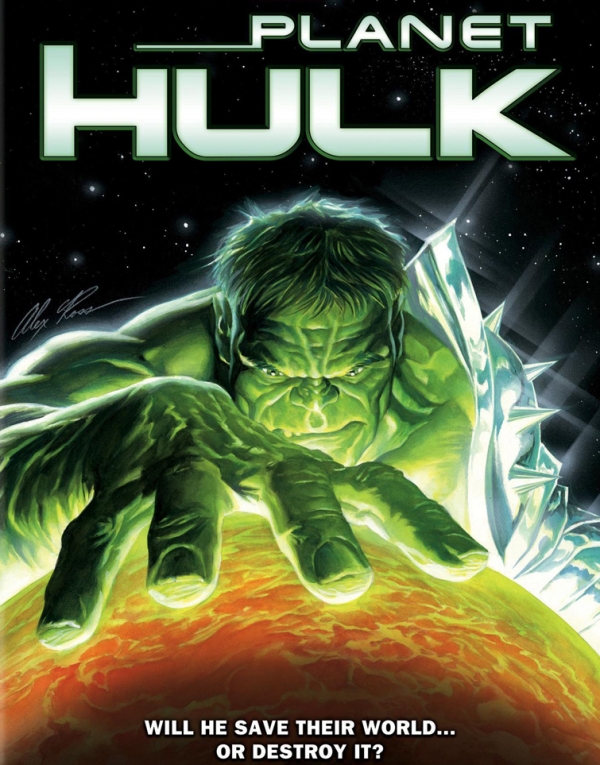 One of the biggest hurdles for me to get over while watching this movie is that the Hulk is not the version of the Hulk that I’ve come to know through cartoons, TV shows, and movies. While the movie tries to ease you into it, there’s a mention of Bruce’s name at the beginning, and Hulk quickly goes on a rage induced rampage. But shortly after he lands on this alien planet, he stops being the pure being of anger and fury. Instead, he has many moments of clarity, intelligence, and compassion and all of this without a single appearance by Bruce Banner. It’s something that takes some getting used to, and it was well into my first viewing before I stopped wondering when he was going to change back into Bruce. On my second viewing, I was much more ok with it since I knew what I was getting into from the very start. But it’s still an odd thing to take away one of Hulk’s defining characteristics. He still has his moments to say “Hulk smash!”, but the moments that are usually reserved for his alter ego are instead handled while still being a giant green creature.

The general story is that he is sent into space heading toward an uninhabited planet where he can no longer do any harm, but ends up on an alien planet, captured into slavery, forced to become a gladiator, and also happens to be the prophesied savior of the planet. It is a very familiar rise to power from the absolute bottom plot with a sci-fi twist. There are a few times when the gladiator tropes are tweaked a little, or at least pointed out as comic relief, but it’s generally a story told many times over. Even so, I thought that core of the story was adapted into the Hulk’s story fairly well. He becomes the reluctant hero quite well, and the supporting characters are all generally interesting. From the scrawny outcast bug named Miek to the big rock creature that would normally be the muscle of the operation if the Hulk weren’t there. But the more interesting characters were on the opposing side, the Red King is a great almost Lex Luthor substitute, he even has the giant suit of robotic armor he wears to fight the Hulk. And his powerful martial arts mystic bodyguard who he saved when she was a young girl, her village overrun by spike zombies.

I think another one of the downsides of this movie is the predictability. As soon as Hulk gets captured and brought to the gladiator arena, it’s pretty clear how it’s going to end up if you’ve seen any gladiator movie at all, or sci-fi shows that have a gladiator style episode. Hulk is the powerful new gladiator that quickly gains the acclaim of the audience while challenging the corrupt king who can’t simply kill him or risk losing favor with the people. There’s a revolt, a traitor, an escape, some deaths, and everyone who’s still alive ends up happy. But while it is very stereotypical, I still enjoyed how it was done. The characters are engaging, the action isn’t bad, although it could be better. I’m very tired of seeing the hero get eaten by a giant worm/snake only to destroy it from the inside. There’s got to be a more interesting way of taking one of those things out by now. There’s also an odd choice of a cameo with Thor and Beta Ray Bill, who if you’re like me and aren’t familiar with the comic books, Beta Ray Bill is basically a horse-faced Thor. Don’t ask me. But aside from these standard plotlines, I still enjoyed the movie and I think it’s one of Marvel’s better animated releases. Whether you’re a fan of the Hulk, or gladiator movies, though Hulk is definitely no Maximus. Until next time, this has been Bubbawheat for Flights, Tights, and Movie Nights.