← This Film Is No Longer Available Due To Copyright Infringement
Superhero Shorts: Spiderman →

The Crow: City of Angels

I’ve been wanting to get to these movies for a while now, even though out of the four of them, there’s only one that I’ve seen and that same one is the only one that’s considered good. For that reason, I wanted to save it until the end, but I also wanted to be able to publish it on Devil’s Night, since the movie takes place around that day. After watching this movie, it really makes me want to skip straight to the original. This is a pale copy that pretends to be a sequel while at the same time apes nearly everything that made the original good, with only a handful of switcheroos here and there. Everything from the effects, to the stunts, even the soundtrack is not nearly as well done or entertaining. And since it’s been so long since I’ve watched the original, I spent most of the time being reminded of moments from the Brandon Lee version that were done immensely better. It has a few interesting moments here and there, but for the most part it tries to be like the original, but really misses the mark. 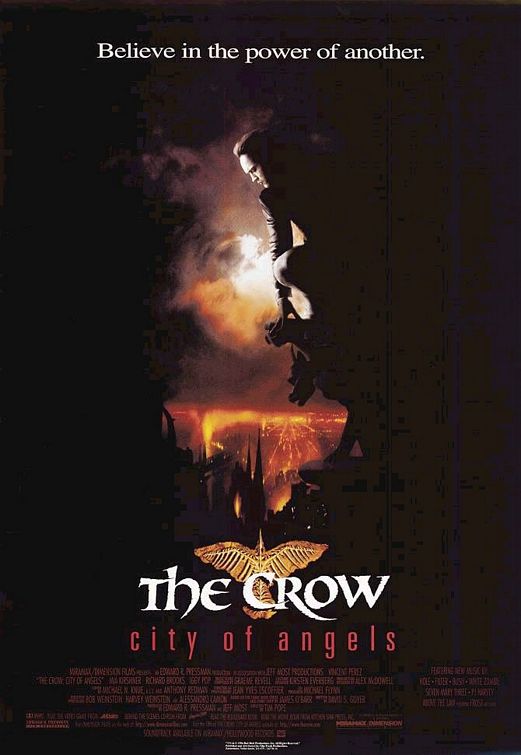 This time around, there is also a ragtag gang of thugs led by a cultish drug kingpin. Only this time around they kill Ash and his son because they witnessed them killing some other random person. Sarah, which may or may not be the same Sarah from the first movie all grown up has been having dreams of their death and is drawn to the pier they were thrown off of by a Crow who revives Ash to take revenge on his killers. There are a handful of differences to the original, like Ash is an amateur magician rather than a musician, there isn’t any cop investigating things, since there is no past love-interest they turned Sarah into a current love-interest, and it takes place during the Day of the Dead rather than Devil’s Night. It has Vincent Perez in as far as I could gather his English language debut playing Ash. He has an unusual accent that is thicker in some places, and softer in others, and it also often feels like he is doing his best Brandon Lee impression but fails. He doesn’t have the same screen presence, and isn’t really able to capture the mischievousness during those moments when he’s toying with his killers, and the moments where he’s reliving the pain of his death & the memories of his son are way overacted and stilted.

We get to see a lot of this face in the movie. A LOT.

Sarah is an odd part of the equation of this movie. I’m pretty sure it’s supposed to be the same street urchin from the first movie, even though she’s much older than the two year gap between when the two movies were released. They tend to focus an awful lot on the ring she wears on her thumb, which I believe is the ring that Eric gives her at the end of the first movie. There’s also a street urchin that looks very similar to the way Sarah did in the original, and shares a scene with Sarah near the beginning of the movie, and with Ash closer to the end, yet it never really amounts to anything. The director also tends to have long, lingering close-ups of her face as if it were the most important thing in the world. I think she plays her part well, I just never really got a sense of what her role in the overall story was.

The villains in this piece are probably just as shallow and one-dimensional as they were in the first movie, but they also feel less interesting. There’s Monkey, who’s essentially the analogue to Skank where he is obsessed with drawings and photographs and is the first one to go. There’s Nemo, who likes to film everything and meets his end in a live nude show with his pants down, though it’s interesting to note that he is played quite amusingly by Thomas Jane. There’s Thuy, the asian woman who is kind of a cross between Bai Ling’s character in the first movie and Tin Tin. There’s Curve, played by Iggy Pop, who is the leader of the thugs and the most interesting character of the bunch. He has some of the best moments in the movie, and one of the better death scenes. And finally there’s the kingpin of the whole operation who is very much like a cult leader, walking around with stilted dialogue spouting philosophical nonsense with an air of over-importance. There’s also the blind seer who tells him about the Crow being the source of Ash’s power and plenty of overly artistic visions of BDSM scattered around his lair.

The visuals of the movie looked awful more often than not, there were too many color filters that might have intended to give it more of a graphic novel look, but instead make it look too cartoony. There’s also several green screen effects that were either early CGI or simply animated sequences that did not look professionally put together, especially the scene where Ash walks through fire, and the final scene with all the crows flying through Ash and into the main villain. Even the stuntwork overall was pretty poor, there weren’t really any fights and the best stunts were saved for the end, with a great looking fall, even though it didn’t really make any sense why Ash was scaling the building in the first place. If you’re looking for a Crow movie, do yourself a favor, skip this one and watch the original instead. It’s practically the same story, only ten times more entertaining in every way possible. Until next time, this has been Bubbawheat for Flights, Tights, and Movie Nights.

← This Film Is No Longer Available Due To Copyright Infringement
Superhero Shorts: Spiderman →