Once again I’m back with another non-superhero graphic novel adaptation, and another one where I knew next to nothing about this movie going into it aside from an early appearance by Scarlett Johansson, and when it popped up, I also remembered seeing a pic of this movie with Thora Birch wearing the Catwoman mask. It’s a little hard to describe this movie, it’s not really a coming of age story even though it mainly follows the life of one girl in an important transition in her life. It’s not really a romance movie even though there are some relationships throughout. It’s not really a comedy even though there are some laughs scattered through the movie. It’s not even what I like to call a slice of life movie as it is a bit deeper than that. One thing I can say about this movie is that it is quite thought provoking and full of relatable characters and typical situations, but with enough of a twist so that they are still worthy of being a cinematic creation. It has really stuck with me in a way that’s hard to describe, but that’s what I’m here to try and do. 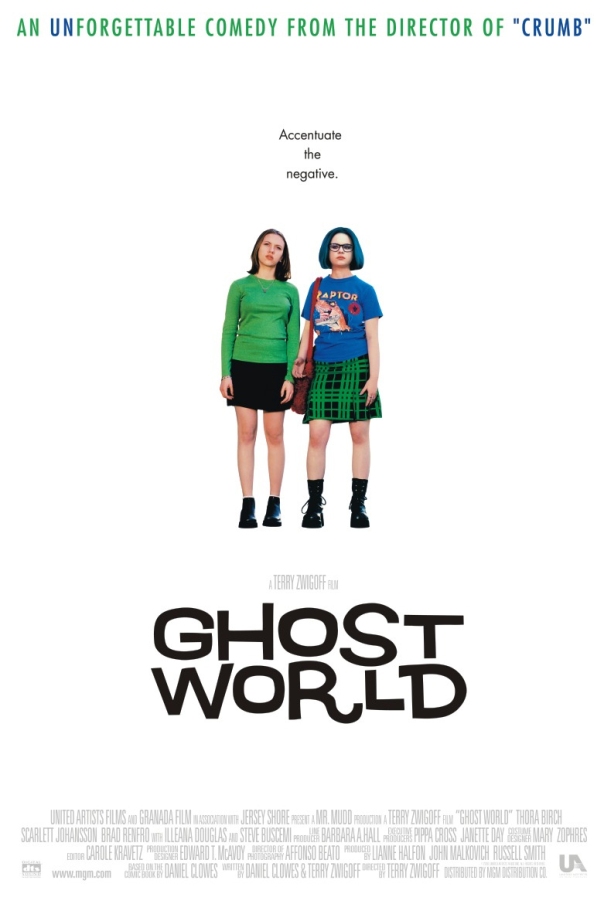 I think when it comes right down to it, what I really took away from this movie, and especially Thora Birch’s Enid is that it takes a look at how leaving high school creates a loss of control for her even when it is supposedly opening her to complete control of her life. The movie opens up during graduation, and even though Enid seems like a bit of an outcast in the high school clique system, she is in complete control of that role. She is in control of her friendship with Scarlett Johansson’s Rebecca. She is in control of who she isn’t friends with, and she knows her next step in life: to share an apartment with Rebecca. She’s even essentially in control of how her relationship with her father. And over the course of this movie, she loses control over everything, including her own feelings when she becomes friends with a middle aged, socially awkward nerd played by Steve Buscemi. 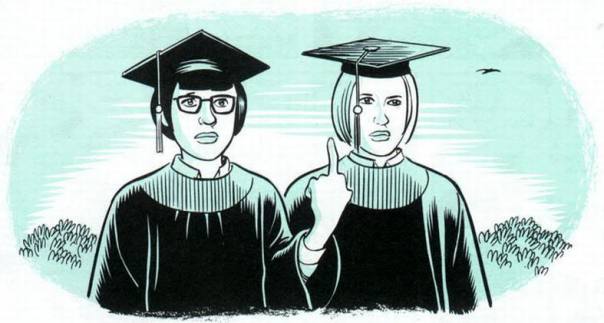 From the original comic by Daniel Clowes

When I first heard about this movie, and saw the poster image with Johansson and Birch, I always thought that it would mainly be about the two of them. But while Johansson has a fairly large role in the movie, she doesn’t play a strong force in this movie, or at least one that doesn’t draw your attention. She starts out being very close to Enid, and is for all intents and purposes her lackey. They spend most of their time together, and even though she often doesn’t want to do what Enid wants to do, Enid’s force of personality wins the argument every time. But while Rebecca is actually starting to mature and goes out and gets a job of her own, Enid continues to procrastinate and make excuses. And at the same time, she befriends this loser of a guy initially as just a joke, until she realizes that they have a lot in common, and that interest grows into a friendship. And once again, her sense of control comes into play as she decides that she needs to get him a girlfriend. But once he does start dating someone, she realizes that she has lost control. Not only has she lost control over what Seymore does on a regular basis, but she also realizes that she has lost control over how she feels about him.

Honestly, the only thing I didn’t much care for in this movie was the ending. There are several points during the movie where Enid sees and occasionally talks to an elderly man sitting on a bus stop bench waiting for a bus that will never come because the stop has been decommissioned. But towards the end of the movie, Enid does actually see a nearly empty bus come to pick up the old man and take him away. And the final shot of the movie is Enid herself sitting down at that bus stop bench before the bus once again shortly comes to take her away. I didn’t like it much because it felt like an unusual spot to place a metaphor for her suicide. It’s something that she mentions earlier in the movie to Seymore about how her fantasy is to one day just up and leave town without telling anyone where she is going, which is exactly what suicide is. Combined with the fact that there are no other glaringly obvious metaphors strewn throughout the rest of the movie that it just felt out of place. Aside from that one moment, I really loved the rest of the movie. There are plenty of strong, relatable characters played very convincingly with the right mix of humor and drama. I especially liked the fact that this movie doesn’t have a single Hollywood-ized person. Every character feels like a real person. Enid isn’t glamourous, she isn’t even the pretty-ugly girl. She is definitely attractive, but she also looks much more like an average person than your typical movie featuring a just-out-of-high-school girl. If you’ve never seen it before, it’s absolutely worth checking out sometime. Until next time, this has been Bubbawheat for Flights, Tights, and Movie Nights.