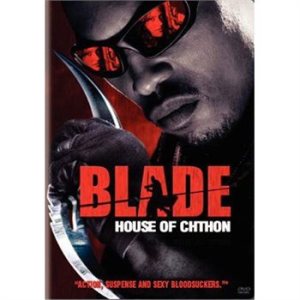 It’s not looking like I’m going to get around to watching the new Ghost Rider anytime soon, so instead I decided to check out something else that I hadn’t seen before. When I bought the Blade series on DVD it wasn’t just a trilogy, it was four movies. The extra movie at the end was the TV movie slash pilot episode of the short lived television series on Spike TV. Blade: House of Chthon. My wife and I were both curious about it so we decided to pop it in and check it out. Long story short, I can see why the show didn’t make it past its first season.

Of course since it’s television, and cable television at that, there’s not going to be any Wesley Snipes. But that’s ok, there could always be another actor that could pull off the character nearly as well as he did. Unfortunately, Sticky Fingaz is not that actor. And yes, the name that he goes by is actually Sticky Fingaz. He didn’t have anywhere near the screen presence, acting ability, or even fighting ability that Wesley Snipes had. He felt like Blade-lite. 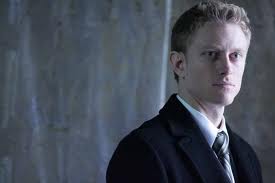 Marcus, most boring villain ever.

But then again, if Blade isn’t that interesting maybe he has a great villain to go up against to make the show worthwhile. Instead we’re introduced to Marcus, a philanthropist vampire that’s restoring old buildings in Detroit and is the face of the ancient house of Chthon that Blade is trying to uncover and completely destroy. He’s ultimately pretty boring, doing very little in the pilot other than talking and explaining what all is going on.

And to top it all off, most of the show didn’t even center around Blade himself. Instead it introduced a new character named Krista Starr who was a sergeant coming home to find her brother dead and slowly entering into the underworld of vampires one step at a time. But the show didn’t do a very good job at making me care who she was or what she was doing. And Blade just kept popping up unexpectedly so they can have a little verbal sparring match before she continues to go off on her hunt for the truth, before somehow becoming a vampire herself and turning into Blade’s undercover agent into the House of Chthon. But in order for that to happen, there was so many confluences of events that were so unbelievable that it’s ridiculous to think that she so easily made her way into the vampire’s inner circle and into Blade’s trust. I understand how it’s a setup for what the show is about, but it would have been a lot more interesting to skip the boring and unbelievable setup and just jump straight into the premise.

There’s also the other subplot of a group of vampires hanging from a barn’s ceiling used for experiments to create a silver and garlic vaccine. Yet another plot for the vampires to get rid of their weaknesses other than the sunlight part. And of course it only works when it ends up being used on the important vampire lieutenant instead of just the cattle. There’s even a few callbacks to the movies, since Blade is back to using an injected serum instead of the inhaler. But if the third movie exists, then the daystar virus would exist which was supposed to wipe out the vampires.

Even the action scenes felt pretty lazy, with Blade getting his butt handed to him more than once. Throughout the whole show, Blade felt like he was one step behind and trying to catch up whenever he could. In the movies, he always felt like he was in control even when he had been captured. There was a lot of stylish camera work, but overall the show just felt empty, filled with characters I didn’t care about and nothing that really made me want to be interested in them. It’s possible that if given a chance, and maybe if they had a better lead actor playing Blade the show could have lasted more than one season. It has a bit of an interesting premise, but nothing in this pilot really makes me want to see the rest of the series, even if it’s only 12 episodes. Until next time, this has been Bubbawheat for Flights, Tights, and Movie Nights.