Tales From the Crypt: Demon Knight 1995

The Graphic (Novel) Horror blogathon is coming to a close, but not before I manage to eke out a couple more horror movies here in March. Also, if you haven’t checked the main page for the blogathon recently, there are a couple updates with folks out on different blogs who have contributed their own articles so be sure to check them out. I was a big fan of the television show Tales From the Crypt, and even though it was around the time when this movie came out, I probably didn’t catch it in theaters, instead finding it when it came to home video and agreeing with the general consensus that the movie wasn’t nearly as good as most of the episodes made for HBO. I especially found it interesting in this viewing that I had a hard time finding good screenshots to take as there is rarely anything interesting happening on screen and the creature effects are mediocre at best. The movie eschews the show’s typical morbid twist and instead relies on a macabre fantasy/action plot with demons and a fun wraparound with the Cryptkeeper tying it in with the television show. There are moments of fun in this movie but they are few and far between. 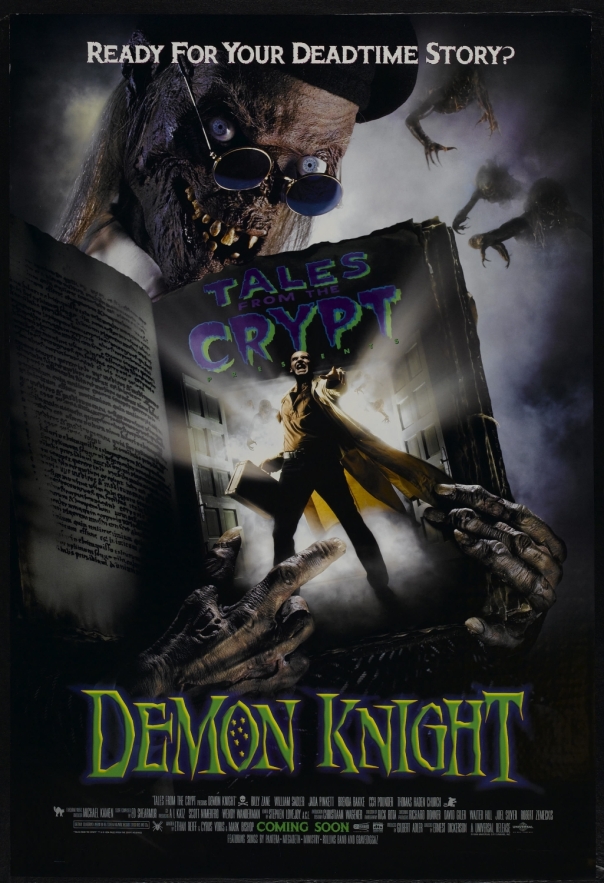 One thing I will say about this movie is right from the beginning it made me want to watch the television show, it opens exactly the same way each half hour would with the opening credits, the theme song, but instead of going straight to the Cryptkeeper there’s a bit of a mini-episode with some bare breasts, a dead body, and John Laroquette for some reason before the Cryptkeeper pops up in a director’s outfit talking about the Tales From the Crypt movie. It’s a great way to open the movie, getting the most of that R rating right away and pleasing the fans of the show. And when he comes back at the end to close out the show it’s just as enjoyable, they even go fairly easy on the puns he’s so well known for.

The best part of the movie right here.

Another thing that is really great about this movie is Billy Zane as a demon going after this key held by William Sadler. He seems to be having a lot of fun in this role as a slick demon more interested in negotiating than fighting, instead leaving that up to his zombie minions. He’s especially great during the scenes where he is seducing the various characters stuck in this motel. Each character is a bit of a cliché and he uses those tropes to seduce them in various different and entertaining ways, especially fun is when he goes after the drunken old uncle with a pool full of topless women and a bottle of alcohol. While every other character in this movie is pretty dead on serious, he brings the right amount of fun for a Tales From the Crypt movie.

I suppose I should mention the other characters, besides William Sadler as the defacto leader of this ragtag group of motel guests trapped by a demon horde there’s also Jada Pinkett as the young woman with a troubled past, a lot of attitude, but a good heart underneath. There’s also a very young looking Thomas Hayden Church as the redneck punk Roach with his girlfriend slash whore Cordelia who’s lusted after by the nerdy Charles Fliescher who you may know better as the voice of Roger Rabbit. Rounding out the rest is Uncle Willy, CCH Pounder as the motel owner, and the deputy. They’re all fairly one-note characters though I do actually admire the fact that the two black women last longer than most of the rest of the group which is atypical for a standard horror movie, though the slut does go first.

The biggest problem with this movie is that it seems to forget where it came from. The Tales From the Crypt show was known for its smart scripts, morbid twists, interesting direction, and decent special effects. This movie has very little of any of those things. The direction was fairly boring, I had a difficult time even seeing anything worth taking a screenshot of. The most interesting moments were the seduction scenes and the opening & closing with the Cryptkeeper. There wasn’t really any interesting twist to speak of, it was an oddly generic knight’s quest style story or vampire hunter or any number of things like that only it was demons. None of the demons even looked that interesting, they were just zombie-ish looking things with green eyes. And to top it all off, it never really had the feeling like it was a Tales From the Crypt story. There was too much sci-fi, too much action, and the blood and breasts felt like they were shoved in there to try and make it more like Tales From the Crypt. It had its fun moments, like the neat little scene with the comic book, and especially any time Billy Zane was on screen, and I did think the ending with Jada Pinkett was well done though they really dragged out the final spit take way too long. I would much rather recommend either watching the television show, or surprisingly watch the original 70’s Tales From the Crypt movie, both are better than this movie. Until next time, this has been Bubbawheat for Flights, Tights, and Movie Nights.