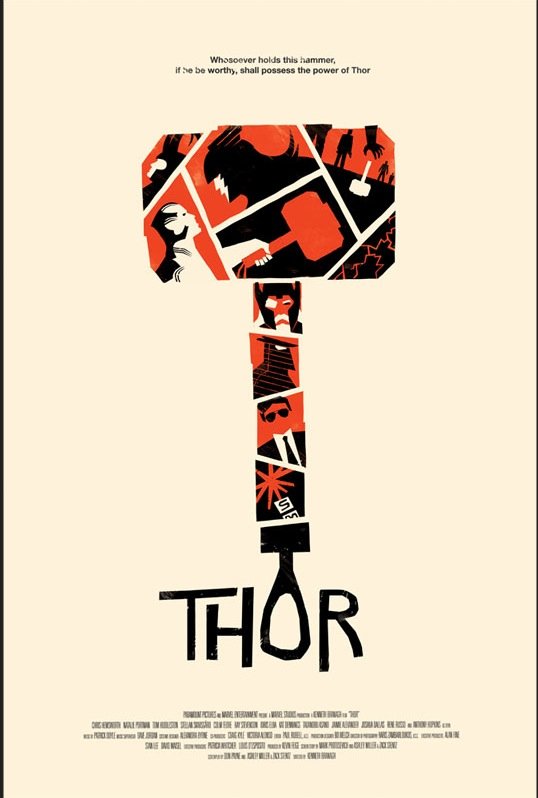 I’ve finally gotten to my last pre-Avengers movie, although I did technically cheat a little in my watching order, I just couldn’t wait and I saw the Avengers already. But since I want to keep my schedule going, I am reviewing Thor first and the Avengers will have to wait until Tuesday. I am also doing a slight schedule change and posting my blog topic for the week on Wednesdays now for a full seven day schedule. This may change in the future if I feel that reviewing three movies a week is a bit much for me but we’ll just have to see how it goes for now. Back to Thor, I was never a big fan of Thor, he never really showed up in any of the cartoons I watched when I was younger except maybe in an episode or two of Spider-Man or Iron Man but none that I remember. So watching this movie when it came out on DVD last year was really my first introduction to the character outside of a couple things. I knew that his hammer could only be picked up by someone who is worthy enough to wield it, and I knew he was essentially based on Norse mythology.

I think one of the hardest things to accomplish when trying to bring Thor to life on the big screen is to make him more believable. I mean, it’s a Norse God who uses a rainbow bridge to come to our plane, flies by swinging his hammer around really fast, throwing it, and hanging on. And yet this movie actually pulled both of those things off and made it look pretty dang cool. The solution turned out to be fairly simple even though it might wrangle some of the more hardcore comic fans. Instead of using the straight up Norse mythology, they updated it to more of a sci-fi angle. As a side note, if Michael Bay handled the Turtles situation this way without blowing it in an interview it might have actually come out with less of a fan onslaught. Anyway, instead of living in a different plane, Asgard is now in a different galaxy. Their magic is explained more along the lines of a technology so advanced that it seems like magic. And personally, I bought it. I liked the melding of futuristic and yet medieval styles in all the designs for Asgard and the Asgardians.

How else could they make a rainbow bridge not seem gay?

A big part of the story is the whole stranger in a strange land when Thor is exiled down to Earth, his power taken from him because of his insolence. He acts like a man out of time, and yet he acclimates very quickly. This is also helped with the technological explanation, it would make sense that he would understand the more primitive technology of our world if their technology has advanced far beyond to the point of magic, even if they haven’t visited in thousands of years. There is of course a woman, there is always a woman where these movies are involved. In this case it’s the scientist Jane played by Natalie Portman. I’m a fan of hers and I thought she did a great job, even though the chemistry between her and Chris Hemsworth wasn’t quite electric, but it was serviceable.

The villain in this piece is Thor’s adopted brother Loki. I wrote in a comment on another review that I thought this movie actually seemed like more of an origin story for Loki than it does for Thor. In this movie Thor has already begun with his power, his hammer, his fighting abilities. During the course of this movie, he grows as a character and becomes what is needed to become king of Asgard even though he doesn’t seek it at the end of the movie, but it’s more like he grows rather than becomes as most origin stories tell. Loki on the other hand does in fact become a true villain. I like Loki because he is given a lot of depth and purpose. He feels betrayed by his father and lashes out in retaliation for being lied to his whole life. All his pent up frustration and jealousy is given a target, and he uses all the means at his disposal to outsmart and confuse his enemies, living up to his name of the god of mischief. It was a little disappointing seeing him as a less complex villain in the Avengers because he really shines in this movie, going big when he needs to, but still being able to show the more complicated aspects of his relationships with his brother and father.

This is a side of Loki that we don’t get to see in the Avengers.

Since I have watched the Avengers prior to rewatching this movie, I do have to make a few mentions of things that I noticed being set up in this movie that pay off in the next movie. There is the tease at the end with the scientist Erik Selvig being controlled by Loki even though they ultimately use a different method than they show here. There’s also a hint of Hawkeye in this movie even though he isn’t given much to do outside of hold a bow. And of course there’s the big role of Agent Coulson and his interaction with Thor ending with Thor pledging to give his services to S.H.I.E.L.D. if they ever need him. And of course there’s the role of the Tesseract, even though it’s never actually called by that name in this movie, but it is shown in the same form that later shows up in the Avengers in the post credits scene. It’s a great movie and a great set up for both Thor and Loki, even though out of all of the heroes featured in the Avengers, I think it would be hardest to create another movie with the same amount of depth as this movie using the same characters. I think at this point Thor would be best used as a side character in someone else’s movie or in another Avengers movie. But I will say that this movie made me a fan of Thor. Until next time, this has been Bubbawheat for Flights, Tights, and Movie Nights.