← Superhero Shorts: Resignation
Filmwhys #27 The Simpsons and Jack of All Trades →

This Graphic (Novel) Horror blogathon is coming to a close and I’m finally coming around to one of the movies that first came to mind when I was thinking about movies that I should cover. I saw it back when it was still fairly new and quite enjoyed it, but hadn’t seen it since then and have never seen the sequel. I always thought it was an interesting concept for a vampire movie. One of the vampire’s biggest weaknesses was the fact that they couldn’t be out in the sunlight, but in the Arctic Circle there’s a full 30 days of night without any sun, not only that but according to this story the town basically cuts itself off from any other town South of it for the duration of the darkest part of winter so this clan of vampires can essentially feed at will for a full month without any fear of being discovered and stopped by a larger force from outside of town. There are also plenty of great visuals along the way that really had a graphic novel feel to them, whether or not they were actually taken from the pages of the original comic. 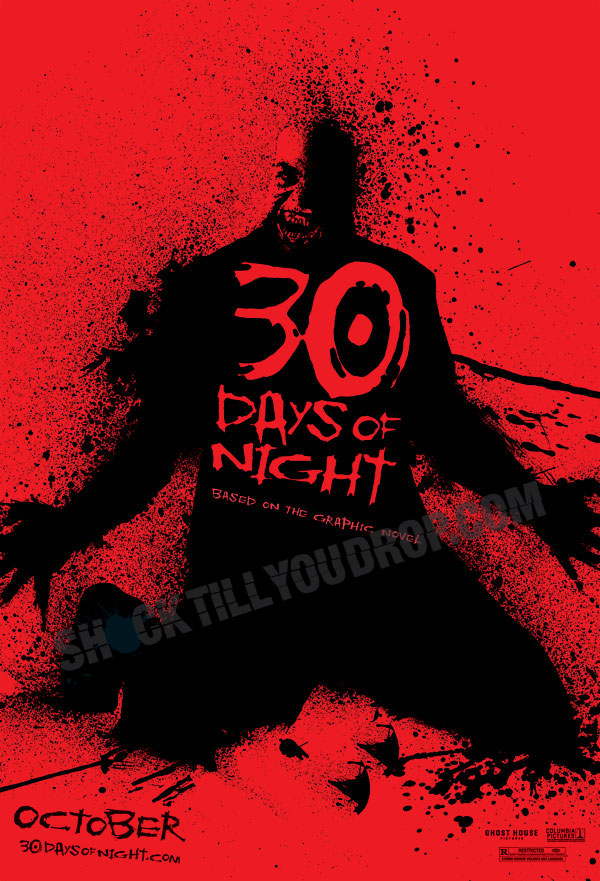 The movie takes place in Barrow, Alaska which is supposedly the northernmost city in the U.S. fully inside the Arctic Circle. It’s the last day before a month-long period before the next sunrise, though one thing I didn’t understand is that I would expect that the last day before the month-long night would technically only be a few minutes of sun, instead it felt like it was at least a few hours of daylight before going straight into darkness. But aside from that minor nitpick the concept overall works for me, especially after doing a quick bit of Wiki-research where I found out that there aren’t any paved roads connecting Barrow to any other town and essentially the only way out of town is by airplane. There’s also a prophetic stranger played fantastically by Ben Foster who heralds the coming of the vampires, but since he is a bit of a weirdo and doesn’t say anything clearly, he isn’t taken seriously and is instead taken to the sheriff’s station.

This movie really is able to pull off a lot of great ideas very well. It has a survival movie going on with it as the vampires have cut off the power to the town and so the surviving group has to keep themselves going sheltered in houses without using generators which would tip off their location to the vampires. There’s also the cat and mouse tactics because these vampires aren’t just mindless beasts, but instead they are thinking creatures who can use bait to lure out those trying to wait out the polar night. There’s also the element that you can’t always trust everyone around you, since being bitten will turn one of the members into a vampire themselves, and there’s also another moment with an older member of the group who has Alzheimer’s and his son who wants to protect him. On top of that, there’s also elements of an action movie during a few of the moments where the surviving humans work on battling the vampires using various weapons.

One of the best parts of this movie in terms of taking a fresh look at the vampire genre are the vampires themselves. Instead of the traditional dark, brooding, sexy vampires, or the more recent angsty, brooding, sexy vampires, they are pale, foreign, and slightly otherworldly with dark eyes, a full mouth of pointed teeth, their own language, and a screeching call to each other. The lead vampire is played exceptionally well by Danny Huston, who really sells his leadership without the use of many words, even when those few words are this original vampire language. The rest of the vampire clan also do quite well, though it’s mostly based on their interesting looks rather than their acting. There’s also the fact that since they aren’t trying to blend into human culture they don’t bother cleaning off the blood after a feeding so most of the movie their pale faces are covered with bright red splashes of blood. There’s even the attention to detail where the evidence of bloody killings that happen during the movie remain when they revisit those locations, as there is no one, and no natural element that would get rid of that evidence.

Often times, in these types of movies, there’s a forced romance worked into the plot which more often than not detracts from the overall story. Here, there is a similar kind of story between an estranged couple consisting of the sheriff played by Josh Hartnett and a fire marshall played by Melissa George, only it was a much more realistic version of romance between two people who know each other very well, but are coming off a rough patch where things didn’t work out, and this situation forces them back together again. It’s something that’s never in the forefront of the movie except during a few scenes, and it thankfully also never delves into the tender romance side of things. This is a movie that I don’t hear mentioned very often any more, but I think it still holds up quite well, especially in the wake of a lot of mediocre vampire movies. The only real problem that I did have with this movie is the direction it takes in the end with Josh Hartnett’s character. It kind of makes sense, but at the same time I didn’t think that it was the only solution based on the situation they were in. But aside from that minor problem, I still think this is a great movie worth checking out, and a nice finish to this month long look at horror movies until I join the rest of the pack and take another look at them this October. Until next time, this has been Bubbawheat for Flights, Tights, and Movie Nights.

← Superhero Shorts: Resignation
Filmwhys #27 The Simpsons and Jack of All Trades →