The Adventures of Tintin

The Adventures of Tintin: The Secret of the Unicorn 2011

Since I’ve been running a few blogathons lately, I thought I would return the favor and join in some of the other blogathons that have been running by some of my favorite sites. So when I saw that It Rains… You Get Wet was helping to run his very first blogathon, I knew I wanted to be a part of it, and when I saw that it was a Spielbergathon, I was even more excited. Make sure you check out the other entries as well as the other sites hosting it: Citizen Screenings and Outspoken and Freckled. Of course, when you think of Steven Spielberg, you think of his many classic blockbusters like Jaws, Jurassic Park, Indiana Jones, and plenty more but while he has many iconic heroes to his name, he has never done a superhero movie. But he has actually been involved with a couple comic book adaptations, directing this adaptation of the long running, beloved French comic which has actually been adapted many different times in France but most Americans were unaware of it, and he was also the executive producer of the odd sci-fi western adaptation of Cowboys and Aliens. This was also a noted collaboration between himself and Peter Jackson who will hopefully still be directing the sequel once he’s done with the Hobbit films later this year. I didn’t see this movie in theaters, but I did enjoy it fairly well once I saw it on home video. I was unfamiliar with the details of Tintin outside of the absolute basics of his appearance and the fact that he was a comic character but knew nothing about what types of adventures he had or his personality before watching this. 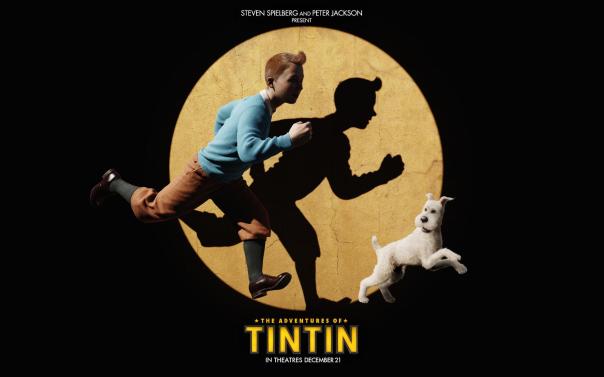 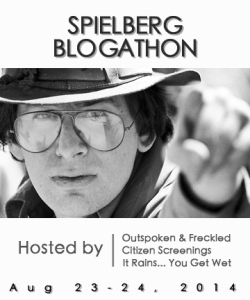 Tintin himself is actually an adventurer slash journalist, going on adventures and then turning those adventures into stories for the newspaper, though we never really see him taking any notes or ever actually writing anything outside of the newspaper clippings he has surrounding his apartment, which is the end of a fairly clear and concise introduction to his character along with a nice homage to the original version of his character via a caricature artist. This particular adventure follows Tintin’s meeting of Captain Haddock and the mystery and treasure of the sunken ship the Unicorn. Of course, he’s not the only one searching for this treasure which he doesn’t even know about at the beginning of the movie.

A great homage to the original comic.

One of the biggest things that this movie has going against it is the style of animation which is the motion capture realistic animation style made famous by Robert Zemeckis and while it has a couple things going for it, like several years of technology advancement and the fact that the characters here are going for more of a caricatured and stylized look, it still falls slightly into the uncanny valley. But only slightly, and much more often with the minor characters especially the Milanese Nightingale who never seemed to look or move quite right. The voicework however is quite good, especially the always fantastic and unrecognizeable Andy Serkis as the drunken Captain Haddock. Jamie Bell is serviceable as Tintin, but the way the character is presented in this movie he is fairly unremarkable. Daniel Craig is also quite good as the villain of the movie Sakharine as are the perfectly cast Simon Pegg and Nick Frost as the bumbling police duo of Thomson and Thompson.

I think we need a bigger seaplane.

Aside from the look and movement of the characters, this film is absolutely beautiful, especially some of the brilliant scene transitions and some great camera movement that could never be done on a live action movie. There is almost always more than one thing going on at any one moment and the camera moves seamlessly between them. This is especially apparent in one of my favorite action scenes, the chase through Bagghar. There is so much going on with several characters splitting up and coming back together, yet it’s all choreographed brilliantly and easy to follow. There are many moments that are worthy of someone like Indiana Jones and during these moments I was reminded of the fact that this was directed by Steven Spielberg.

A great parallel between the two related villains.

One negative thing I will say about this movie is that the whole mystery aspect is that most of the mystery elements are spelled out to the viewer as the characters discover them so there’s no real chance to try and figure out the clues for yourself, though admittedly it’s not exactly that type of movie in the first place. There is also quite a bit of mostly bloodless violence including a character that gets shot and killed near the beginning of the movie and plenty of the henchmen fire guns, even Tintin himself wields a gun, though he never seems to aim it specifically at a person at any point. It occasionally feels like an odd tone overall, there are plenty of attempts at serious moments, but they are undercut by the fact that it is a PG movie and it can never get too serious. There are also plenty of moments of lighthearted slapstick and childish humor. I will say that the dog Snowy is easily my favorite character. While there have been plenty of similar animals like him, the overly smart and helpful dog that often seems to know more than Tintin himself, but there’s still enough of a dog in him to make him quite endearing. Like the couple instances where he overlooks the task at hand in order to get a bite of a sandwich. This is the second time that I’ve seen this movie and I still enjoy it quite a bit, from the beautiful opening that is very reminiscent of Catch Me If You Can to the brilliant action sequences and the fun of the fairly random pickpocket slash kleptomaniac side story, if you haven’t seen this entry in Spielberg’s filmography, it’s worth your time to check it out and I’m looking forward to the sequel. Until next time, this has been Bubbawheat for Flights, Tights, and Movie Nights.