This marks the third anniversary of when I started Flights, Tights, and Movie Nights and in that time I’ve seen a whole lot of superhero movies and comic book movies. You can learn a lot about a particular niche of film when you start delving deeply enough into it. While I was aware even when I started this site that superhero movies were currently on the rise, even back at the tail end of 2011 I had no idea that they were going to reach the heights that they are at now, and there shows no signs that they are slowing down. All of the major players have their own superhero cut of the market that they can claim as their own with the only exception being Paramount Pictures which has had their hands in Marvel properties, but the closest thing they can claim are the Transformers and G.I. Joe properties which are based on toys and cartoons that have had comics as well. But that’s beside the point, I thought I’d take this opportunity to share some of the things that I’ve learned over the past three years.

Older is not always better

There’s a lot that can be said for classic cinema. There have been some great films made in the past that withstand the test of time and are still considered to be great films. The stories, the characters, in some cases even the filmmaking techniques of the time still look as good today as they do now. That, however doesn’t hold true for the most part when discussing superhero cinema. With only a few exceptions, the older the movie, the worse it is. When dealing with a character that has superhuman abilities, special effects are almost always needed, and unfortunately, the farther back you go, the less quality there is for quality special effects. The best classic movies have characters and screenwriting that still work, but the special effects are only as good as what they are trying to do, and when they are trying to do something that cannot be done in real life, that’s where the strings can most often be seen. Especially in the 90’s when special effects were starting to transition into computer generated imagery which was cheaper, but rarely looked anything like real life.

If there’s any type of film that I’ve seen more often than anything else, that has been the origin story. Outside of the sequel that has become more and more common, nearly every superhero that is introduced into the cinematic universe has to have his origin told over the course of an entire movie. Whether it’s Hellboy, Meteor Man, or Batman, the origin has to be told. And in some cases, like Superman or Spider-Man, it has to be told several times over. There are only so many different ways that the origin story can be told, and if there’s one type of superhero movie that I could say I’m getting tired of more than others, it is the origin story. I just hope that Marvel holds to what I’ve heard when they have said “no more origin stories”. The origin can be mentioned within the context of the film without having the entire story revolve around the hero or heroine’s origin. 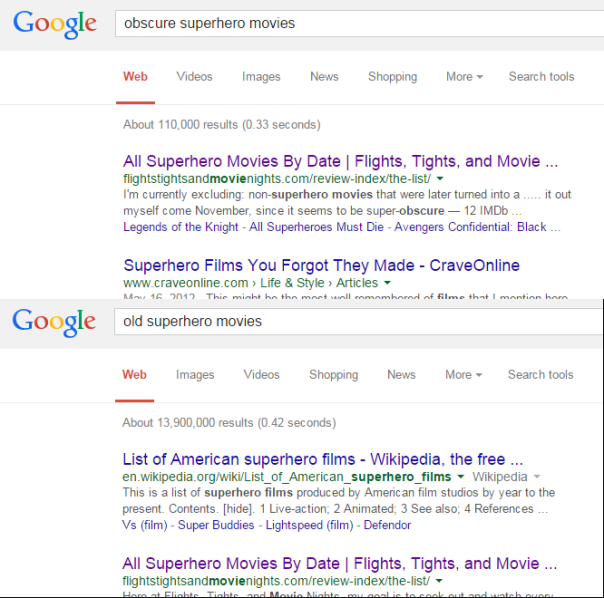 A Beacon for Obscurity

There are a lot of sites out there much bigger than me that cover superhero movies (which I’m not going to list at the moment). If some random person wants to hear an opinion about Guardians of the Galaxy, Man of Steel, or X-Men, you go to one of those sites. But if you want to know about the Amazing Cynicalman, or The Photon Effect, or All Superheroes Must Die, or the Marvel anime Black Widow & Punisher, you come here. I’m ecstatic that some of the most popular reviews on this site aren’t for Big Hero 6, but instead they are for the Batman documentary Legends of the Knight, the indie Noir superhero film Sparks, the weird anime superhero film Hentai Kamen, and James Gunn’s early superhero film the Specials. Or that when people find my big list of superhero films, they’ll check out Squid Man or Mr. and Mrs. Incredible.

This goes hand in hand with the topic above, but some of my favorite films of the year never had a single showing in a theater outside of maybe a small festival or two. DC Animation has consistently been putting out great films that have been going straight to VOD & DVD (and often straight to the “family” or “kids” section at the store to my own frustration) The Flashpoint Paradox, Green Lantern: First Flight, and The Dark Knight Returns rank right up there with the best superhero movies out there. I was also quite fond of Sparks and the Scribbler that came out this year and All Superheroes Must Die from last year. There’s a lot of great movies out there and not all of them get the opportunity to make it to a theater near you.

This is something that could really get its own full post, and I may just write that at some point down the line, but I’ve noticed that there really are four different points where the course of superhero movies really turned a corner from what had come before. The first is the Richard Donner Superman: The Movie. Before this one they were all generally campy copies of the Adam West Batman show on TV. Superman showed the world that superheroes could be big budget blockbusters and inspired quite a few wannabes, though none of them really lived up to the effort until Tim Burton’s Batman. Batman took the superhero movie into a darker realm that felt much more like the comic book stories of that era while still retaining some of the lightness and camp, this inspired many darker comic book heroes like Darkman, the Crow, Spawn, even Teenage Mutant Ninja Turtles. None of those could have come out without the success of Batman. Next up would be X-Men in 2000 which bridged the gap between the comic book world and the real world, it showed that superpowers could be treated in a much more realistic fashion than had ever been done before, without the X-Men it’s unlikely that Christopher Nolan would have ever gotten the chance to make his version of Batman that really showed how far superhero movies had come. And finally, the Avengers showed the power of taking separate superhero franchises that were successful in their own right and combining them into something that’s greater than the sum of its parts, its success has paved the way for nearly every other movie studio to greenlight some form of superhero or franchise team-up in the near future to help piggyback on the Avengers success.

Nearly Everyone Has Been in a Comic Book Movie

When you really start looking at comic book adaptations and superhero movies, they don’t have the stigma associated with them that they once did. The list of well known and respected actors who have never touched a comic book movie is getting smaller all the time. From Al Pacino to Tom Hanks, Morgan Freeman to Samuel L. Jackson, it seems like they have all had their hand in a superhero movie at one or more points in their careers. So much so that looking at the upcoming cast list for the Suicide Squad of all things seems like a who’s who in Hollywood with everyone from Will Smith and Jared Leto to Viola Davis. Now if only Leonardo DiCaprio or Robert DeNiro would appear in a comic book movie my day would be made.

I Couldn’t Do This Without You

And before I wrap things up here, I wanted to give a big thank you to each and every one of you who read this site, and especially those who comment. I love getting into the discussions about the films and TV shows whether it’s here or on Twitter where I’ve recently hit the big four digits and have gotten over a thousand followers. Or it’s right here on this site in the comments section. I don’t get the chance as often as I would like to comment on other sites as there are too many to name, and I do much of my reading on my phone where it’s often hard to type a good, long comment. But I do appreciate each and every person who reads and comments here. It’s a big reason why I do what I do and why I’ve kept at it these three years and hope to keep it going for many more years to come.