Finally, my quest to watch all of the films released in 2014 (that I know of) is finished with Squid Man. Even though it is yet another one of those questionable release dates. It was completed in 2012, ran the festival circuit for a couple years, and was released online early this year. It’s a low budget comedy/drama about the life of a third rate superhero down on his luck. Even though most of the comedy in the film is low-key and situational, the characters are quite fascinating and relatable with just enough fantasy thrown in to remind you that you are watching a superhero movie in a world full of superheroes. There’s a few special effects, a couple fights, but it’s mostly just the life of Squid Man when he’s not out fighting crime. And at the start of the film, he’s not doing much of anything besides drinking at the bar with his friend.

Squid Man is not the most powerful superhero out in the world, he’s not even in the middle of the list. His only real power is the ability to shoot ink out of his fingers. And if he really concentrates, he can shoot ink out of his toes. He really only has one claim to fame when he was instrumental in defeating Lord Paradox before he could destroy the entire universe. Unfortunately, that wasn’t enough to keep him employed in his current supergroup and he’s stuck crashing with his friend who isn’t much better off as he collects unemployment, scratches off lottery tickets, and has a grand plan for some class action lawsuit. His luck starts to change when Pete comes into the bar wanting to interview him about a book he is writing about superheroes, starting from the bottom up.

The film uses Pete as the framing device to get Squid Man to tell his life story, or at least the superhero portions of it, and it works quite well. Squid Man himself was never in the top tiers of superherodom to begin with, and now it seems like he’s reached the end of his career. Andrew Roth does a great job of playing him as a likable schlub who never seems to let life get him all the way down even when he’s out of a job and forced to look into a temp agency. And even when he does manage to get a call into an office job to clear out a feral file clerk for a mere hours pay, it’s just another story to tell to his friend at the bar. He also is someone who doesn’t really have an identity outside of his superhero identity. He literally wears his costume all the time, at the bar, at home, at the grocery store, everywhere. It’s not until things start looking up for him and he starts seeing Martha that he starts occasionally wearing normal clothes. And when she ends up leaving him, he goes right back into the costume again, almost like it’s a form of addiction or a coping mechanism. Not something that you see in a typical superhero movie. 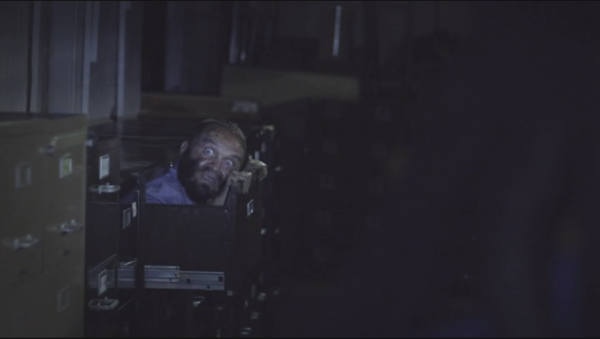 A fun moment when Squid Man confronts a feral file clerk at an office.

Throughout the movie there’s also an underlying air of mystery that keeps things interesting. When he first meets Martha, it’s under the pretense that he is helping to find her boyfriend from college who seemingly vanished without a trace. He doesn’t have any traceable records and no one seems to have known him outside of the time they spent at school together. Squid Man also gets an endorsement deal with a snack cake company where we get to see a great live action homage to the Hostess Fruit Pies ads in silver age comics. But eventually that deal goes south when people mysteriously start dying from those same snack cakes. There’s also a flashback where Squid Man talks about the time that he died, and in true superhero fashion did not stay dead for very long. He had a vision of a weird head with tentacles all around it who said that it was not his time yet, and when he awoke he didn’t have any scars from his injuries. In fact, he didn’t have any scars from any of his childhood injuries either.

There are plenty of moments that cleverly take the tropes of the superhero genre and turn them askew just a bit. Like the commercial, or the death moment. He even tries to ask the entity at one point whether he is the same person or an exact copy, or even something else entirely. But doesn’t end up getting any answer. There’s also the flashback to his one true time to shine during what felt like some giant crossover event to defeat the ultimately powered supervillain Lord Paradox. And Squid Man reveals that his one true success was a result of dumb luck when he just really had to pee and couldn’t find the bathroom in the spaceship lair so he accidentally went on the master control panel. There’s even the fight with the rather mentally challenged, muscleheaded, wannabe supervillain trying to make a name for himself by killing superheroes. And instead of fighting, Squid Man has such a low opinion of himself as a superhero that he just tries to reason with the guy that he won’t gain any recognition for the defeat of Squid Man.

Squid Man in his element. At a bar.

There is also a bit of a twist towards the end that was a bit of a surprise. There were definitely clues throughout the film that something was amiss, but it’s unlikely to predict the full extent of what was going to happen. There is an oddly ambiguousness when it comes to the very end of the film that leaves quite a few unanswered questions, but also has a vaguely uplifting tone to it where it can be assumed that nearly everything works out ok in the end. This was not at all what I expected going into it. There aren’t a lot of laugh out loud moments throughout the film, but the main characters feel like people that could actually exist if there were superheroes running around the world. There’s enough meat to the story that makes you want to know more about Squid Man’s past, present, and future. I was really quite intrigued by this film and if you are on Amazon Prime, it’s worth your time to give it a chance. Until next time, this has been Bubbawheat for Flights, Tights, and Movie Nights.