← The Death of the Incredible Hulk
Weird Science →

Josie and the Pussycats

Josie and the Pussycats 2001

One thing I continuously find fascinating is the year 2001. The year before had several superhero movies: Unbreakable, X-Men, even smaller ones like the Toxic Avenger 4 and the Specials. But just one year later there wasn’t a single superhero movie to be found, at least as far as I can tell, only a handful of non-superhero comic book adaptations covering a wide variety from the macabre From Hell, the teen angsty art film Ghost World, and this bright and cheery Josie and the Pussycats. Even though I never watched the cartoon when I was younger, I was aware of the show through the early days of Cartoon Network when they ran all sorts of Hanna Barbera classics that they likely got the rights cheaply. I don’t remember if I watched the film when it came out in theaters, but whenever I did see it I quite enjoyed it. And watching it again now, it still hits a lot of the right notes where it’s very self-referential with its humor which helps to hide the fairly mediocre and ridiculous plot. The music is fun and it feels very of its time without feeling dated in a bad way. My wife thought it was bizarre, and my daughter grew bored of it quickly, but I loved revisiting nearly every minute of it.

The film starts off with an opening sequence that would fit right in with a 90’s sitcom, or the classic cartoon with a happy pop song and snippets introducing all the main characters from the cartoon along with a couple shots of kittens for good measure. The Pussycats are a very down on their luck band just trying to make it in the small town of Riverdale. At the same time, there’s the hottest boy band on the planet who happen to discover something about their music which causes their manager and pilot to bail out of their plane to leave them to their doom. It sounds pretty gloomy, but it’s handled in such a tongue in cheek way that it’s pretty hilarious. The Du Jour boy band scene really nails the late 90’s boy band saturation point and it’s helped that the band is played by the likes of Breckin Meyer, Seth Green, and Donald Faison and their hit song is “Backdoor Lover”. It may be an easy target at how many non-fans of boy bands believe that most of their members are gay, but the ridiculousness of the song combined with how the actual lyrics work with the concept make it hilarious. 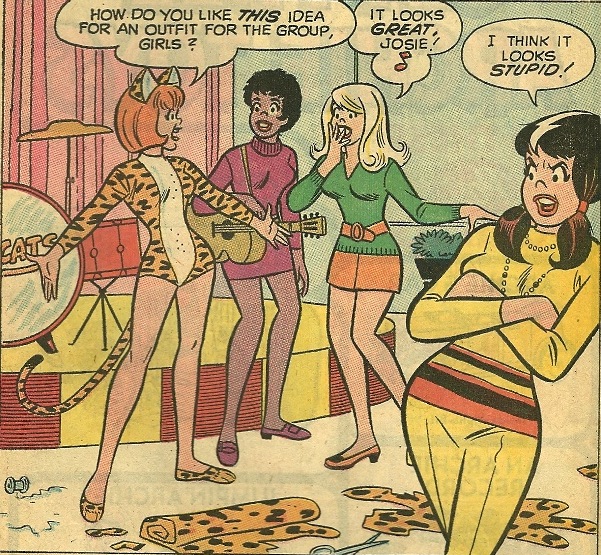 From their first appearance in the comics

If there’s any real downside to the film, it’s that believability is completely thrown out the window, but it’s replaced with meta movie logic. At one point the characters even question why the studio allows the band’s manager’s sister along with everyone else, and the obvious reply is “because I was in the comic” only to be quickly brushed aside as “nothing”. Even at the end of the film when the entire subliminal message plot has been thwarted, there’s a meta explanation from the government agent who had been going along with the plan earlier that “subliminal messages work better in movies” followed by the obligatory “subliminal” message within their own film. Another great moment comes right before that when the agent is shocked by the crazy white stripe in Alexandra’s hair and he calls it a “skunk on her head”.

Subtlety is not this film’s strong suit, nor would I want it to be.

The actual characters are more or less either parodies of characters or empty shells of a character. Out of the three bandmates, Josie is given the most to do as the lead singer and the one that the studio pushes to the front of the marketing. She also has the requisite love story with her old friend-who-never-saw-her-as-a-love-interest-until-he-sees-her-wearing-a-sexy-dress that plays out pretty much exactly as you might expect with the missed connections before finally coming together at the end. It’s also given that edge of humor as the studio manager Wyatt makes a call about the “message” left by the guy at the front desk while he’s right in front of Josie. It’s that level of hanging the lampshade on it which makes most, if not all of the tropey plot conventions much more palatable. Next up is Val played by Rosario Dawson who is supposedly the fun one? But for most of the run time of the film, she just becomes obsessed with the thought that Josie is overshadowing her on purpose. And to finish off the main trio is Melody aka the bright and cheery but stupid one. While there are some moments that are funny, for the most part this time around I was not taken with her style of humor at all and Tara Reid became the weakest point of the movie.

The best part of the film is also in a way the worst part as it becomes this satire against commercialism. But the way that it does this is partly through a giant sea of product placement. There is not a single scene in this film that does not contain at least one prominent product logo, and usually several. Even if IMDB trivia is to be believed and none of the placements were actually paid for, they are still ever-present and difficult to ignore. While it is part of the joke, it’s a joke that can easily wear out its welcome early on into the film. There’s also the take on the consumer culture of young people with low paying jobs but no fiscal responsibilities. Even though subliminal messages don’t actually work, within the world of the movie they work instantly, causing teenagers to throw their money at the latest fad tossed in by the record labels. But while the message is there, it’s not really enough to be taken seriously. Overall, the film is really a lot of fun especially when it’s not taken seriously. I especially enjoyed the part where Val insulted Aries Spears on his cut rate impressions. Until next time, this has been Bubbawheat for Flights, Tights, and Movie Nights.

← The Death of the Incredible Hulk
Weird Science →