Every once in a while I run across a movie that I don’t really know anything about aside from the title, the year it came out, and the fact that it’s related to superheroes or based on a comic book. That’s all I knew about this film, and after watching it, I suddenly wanted to know a lot more about it, but couldn’t find anything else. All I know is that it’s supposedly a TV movie and the only air date I could find was on the Fox channel March 21, 1994, as well as vague (USA) release date of October 11, 1993 via IMDB. But the kicker is that this is very much an R rated film with a not-insignificant amount of nudity, some swearing, and noted Cinemax queen Shannon Tweed in a minor role. This would lead me to believe that it originally aired on Cinemax or a similar station, but I can’t find confirmation of that anywhere. This film is also noteworthy as the lead is an early role for Famke Janssen who would later go on to play Jean Grey in the X-Men films. I went in expecting a pretty bad film, and it was actually a lot more enjoyable than I expected. Don’t get me wrong, it’s still a cheezy, slightly sleazy, made-for-TV movie made in the 90’s, but I had a lot of fun watching it, and Famke Janssen had a lot of charisma even back then.

If you couldn’t tell by the title of the film and what site you’re reading this review on, the story is about a famous supermodel Lex played by Famke Janssen who decides to become a vigilante at night who earns the nickname Lady X. This is right after her best friend slash roommate J gets carjacked while borrowing Lex’s car and has an unspecific eye injury that requires her to wear an eye patch for the whole movie and could ruin her chances at a modeling career. Shortly after she busts a few common criminals, a copycat Lady X starts making her way through the Russian mafia starting with the club owner that wasn’t getting along very well with Lex. Lex then gets caught up with a police detective working the case and a freelance hitman working for the Russian mafia to try and find out who the killer Lady X really is. 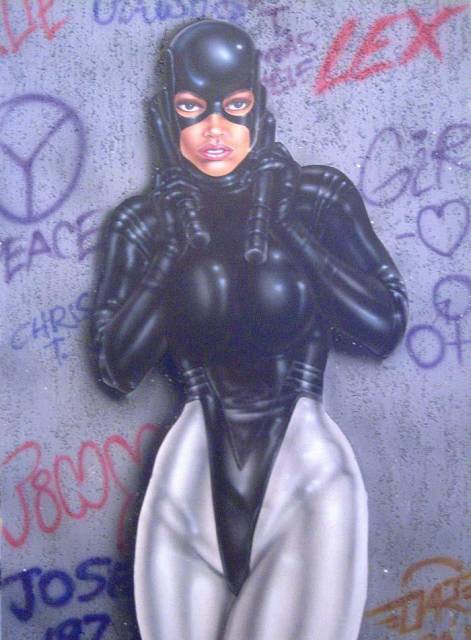 Surprisingly, this was based on an actual comic from an indie publisher.

The odd thing about this film is that at many points during the film, it feels like it’s halfway to a Cinemax after dark film. It never goes all the way to a soft-core sex scene, but it doesn’t shy away from having models run around topless, and the killer Lady X gives her first victim a little bit of a tease before killing him. Of course, this makes sense because she ends up being Shannon Tweed’s character. The bad part about that reveal is that Shannon really only has a small role at the beginning of the film, then disappears until the final reveal. Meanwhile, Lex’s roommate J spends plenty of time acting suspicious in a misdirect that’s supposed to make the audience think that she’s the killer Lady X. But instead, she was just trying to get a picture of the vigilante.

There are plenty of fun moments throughout the film alongside some completely ridiculous moments. Famke Janssen does a great job in the lead role, even buried within this TV movie it’s hard to deny her screen presence. There’s also plenty of odd criminal characters, like an Asian guy who prepares to bust some martial arts moves on Lady X, but instead just waggles his foot in front of her face as if he’s just trying to get her to smell it. Before she even becomes Lady X, there’s a couple German beach goons who come in and disrupt a photo shoot involving a camel and it’s up to Lex to kick some sense into them. Johnny is also an interesting character, he’s Tommy’s bodyguard as well as a hitman working for the Russian mafia ordered to kill Lady X. But since the mafia doesn’t even really trust Johnny, he ends up teaming with Lex to find the real killer. 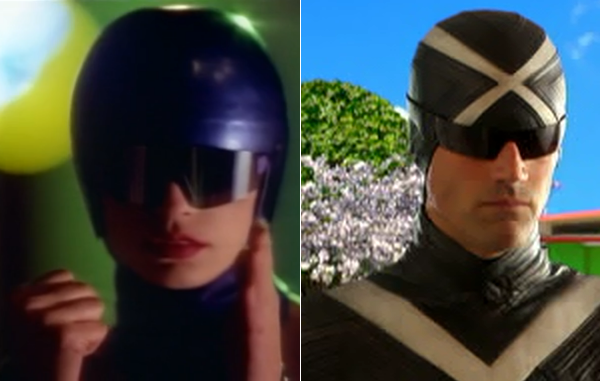 Tell me you don’t see the resemblance.

When all is said and done, it’s difficult to actually call this a good movie. There’s just so much going on here; Lex and her new career as Lady X, a killer copycat that shows up seemingly a few days after she does, a police detective that’s on her friend’s original case as well as the Lady X case who ends up falling for Lex, the whole Russian mob angle with Tommy and Johnny, and to top things off it spends plenty of time supposedly behind the scenes of Lex’s modelling career. The tone is hard to get a real grasp on, it alternates between trying to empower women while at the same time exploiting them. For every time we get to see a woman kick some ass, we get to see a woman’s ass, or breasts, or a group of women in their underwear. Not to mention that besides Lex and J, none of the other models get names, or even lines. And the soundtrack is another reason to think that this was just one soft-core sex scene away from being Emmanuelle. Even the Lady X costume looks pretty ridiculous, it’s a purple helmet, sunglasses, boots, and a bustier, essentially it’s the Racer X costume with more cleavage. Meanwhile, the killer Lady X costume is almost the same only instead of the helmet and sunglasses, she just basically has a nylon over her face. It’s silly, it’s ridiculous, it’s cheesy, but there were plenty of moments that I really enjoyed. If you’re a fan of Famke Janssen, there are worse ways to spend an hour and a half. Until next time, this has been Bubbawheat for Flights, Tights, and Movie Nights.