← September Update, stats, and the like
Filmwhys #57 Asphalt and the Lone Ranger →

The Trial of the Incredible Hulk

The Trial of the Incredible Hulk 1989

My first real exposure to the 1970’s Incredible Hulk series was the final film the Death of the Incredible Hulk, so I decided that I would go ahead and continue the trend by watching the three films that followed the series in the reverse order. This was the second of those films and was originally intended to introduce Daredevil as a possible series in its own right. I find it interesting how television was handled differently back then, there are many series that initially started out as a stand alone pilot movie, and if the movie was successful, then it would launch into production to air the next year give or take. It’s also worth noting that while I didn’t care for the Death of the Incredible Hulk at all, I generally enjoyed this film. There was a lot more done with its television budget in terms of sets and cinematography, and the characters felt more fleshed out. There were still plenty of gaping plot holes and sub par special effects, but they were integrated into the story much better. 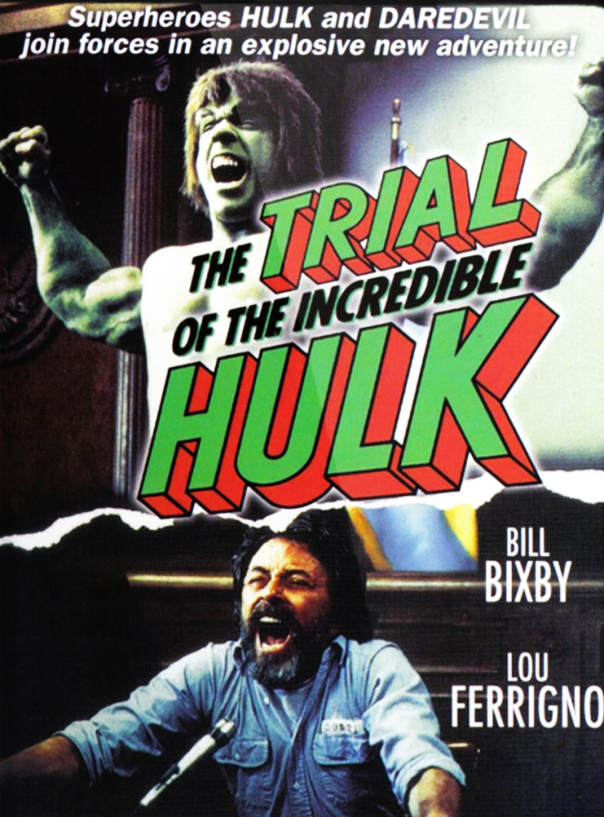 As this was intended to set up Daredevil as a character to possibly spin off into his own series, there is a definite focus on him as much, if not more than David Banner and the Hulk. Throughout this film, Banner only gets three hulk-outs, and one of them is during a dream sequence. Which also leads to the fact that the title of the film is the Trial of the Incredible Hulk, but that trial never happens in actuality, only during that dream sequence. There really isn’t even the element of the Hulk philosophically being on trial for any misdeeds he may have caused while being green. In fact, the entire way that the judicial system is portrayed here doesn’t make a whole lot of sense. The police chase a green brute through the subway tunnels, find what looks like a homeless man and arrest him. Later on, he escapes with the “help of his green friend” and hides out with Daredevil, but when they finally find the evidence that could potentially clear Banner’s name, the rest of it is skipped over, including Banner’s jail break and property damage. Between the last two films, it’s interesting to note that Bixby plays Banner much more beaten down and defeated here in this film, where in the final film he has more energy and seems to be filled with more hope as he gets a step closer to curing his condition. Here, there’s a real feeling of the weight of years of living with this giant beast of a secret that he just wants to stay buried. Rex Smith does a decent enough job playing Matt Murdock and Daredevil. There obviously isn’t anything special in terms of fight choreography, and his playing blind is simply staring off into the distance while dealing with everyone’s perceived limitations of his conditions. Some of the best subtle moments are between Murdock and Banner after both of their secrets have been revealed to each other, and Banner will do things like start to announce that he’s holding his hand out, or after he writes something down on a notecard he gives it a little audible flick. 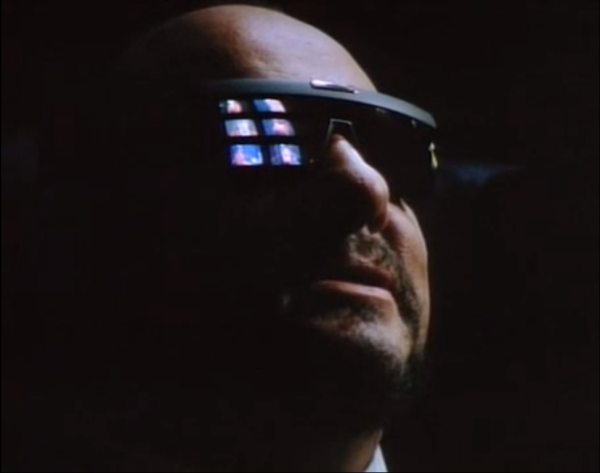 Of course, this wouldn’t be a backdoor pilot without the introduction of a villain. And like most Daredevil adaptations, the villain here is Wilson Fisk. Also, like the recent Netflix series, he is never actually referred to by anyone as the Kingpin. Here, he is played by the great John Rhys Davies who looks just like John Rhys Davies. There’s no real attempt here to make him look more like his comic book counterpart, he retains his typical hairstyle and beard, but is given a pair of highly reflective sunglasses that he wears nearly constantly while he spends most of his time in his high tech penthouse suite at the top of his skyscraper. While he initially sounds rather bored as he directs his minions through a well choreographed bank heist, he grows more animated as the movie goes on. He also has a good plan to capture and kill Daredevil, only to be thwarted by the Hulk in his last appearance in the film. It’s also a nice touch to have Matt Murdock spend some time in recovery after his defeat and near death at the hands of Kingpin.

One last thing to mention about this film is that it does have some moderately impressive cinematography and framing. There’s nothing that comes quite close to anything theatrical, but considering this was a made for TV movie, the visual flair was quite nice. While it’s not exactly a bald head, Kingpin’s mirrored sunglasses are used quite well in a couple shots. There’s also a moment during the climax where Daredevil is at an intersection between two hallways and the shot is angled almost as if it were shot by one of the Kingpin’s many security cameras and it also gives it a very angular and symmetrical look. There’s even a shot where the Hulk is breaking through a door that almost looks like it was intended to be done in 3-D with his fist coming out at the audience, but even without the 3-D there’s still a technique with the lens and focus that makes Lou Ferrigno’s fist look absolutely humongous. Even though there really isn’t enough with the Daredevil here to make any sort of decent TV series, it holds up well as a stand alone movie. It even introduced Daredevil’s black outfit which was later re-used-but-short-lived in the comics and brought back again in the Netflix series. I had fun with it, and I’m actually starting to look forward to the first post-series Hulk film. Until next time, this has been Bubbawheat for Flights, Tights, and Movie Nights.

← September Update, stats, and the like
Filmwhys #57 Asphalt and the Lone Ranger →