← Batman Unmasked: The Psychology of The Dark Knight
Rendel →

Once again I’ve come across a film that straddles the line of what would be considered a superhero movie. I think the biggest argument that I could make in favor of this film being a superhero movie is partly based on something that I read in the IMDb trivia section that I completely agree with. Apparently, this was inspired by the Guyver and if that movie series is considered a superhero movie, than this kid version of the Guyver definitely should be as well. It’s basically a 90’s era typical kid wish fulfillment fantasy that contains pretty much all the tropes. And similar to the Guyver in general, pretty much everything about the movie is pretty bad except for the creature effects.

One of the worst things about this movie is how many 90’s kid movie tropes that it checks off of the list. The main character Spencer is the sympathetic shy nerd who gets picked on by the giant bully that’s about twice his size. There’s also the love interest who is a near perfect match for Spencer, she even likes the same comic book character that he does, but Spencer is too shy to even say a single word to her. And on top of everything else, he has a workaholic father, a mother who passed away fairly recently, and an older sister who thinks he’s annoying and would rather be spending time with her bad boy boyfriend played by That 70’s Show’s Danny Masterson. She also happens to look like she’s trying to imitate Brittany Murphy’s character from Clueless. There’s even the perfect teacher who tries to help him overcome his fear to talk to the girl he likes, except it comes off just a tad on the creepy side.

The general concept of the movie is that there is this alien war and one side has developed an exoskeleton cyber combat suit that they could wear but somehow it ended up on Earth. And the aliens happen to be about the same size as a 12 year old kid so of course Spencer is the one who stumbles across it and gets inside the suit where he becomes a super powered kid. Not only that, but the suit has its own AI and personality where it is able to understand English and learns about 90’s Earth culture from Spencer as the kid takes him around for a joy ride, basically. While it’s just the two of them, he terrorizes the bully, stalks his girl crush, and inadvertently destroys his kitchen and living room. And not long after that, the movie takes a detour into one of the longest pee jokes ever committed to film. It actually started off quite funny, but literally went on for a full five minutes. It’s not until over an hour into the movie before the actual antagonist shows up, and during that time where Spencer is taking the suit out for a joy ride, he’s actually being quite a bit of an obnoxious prick. 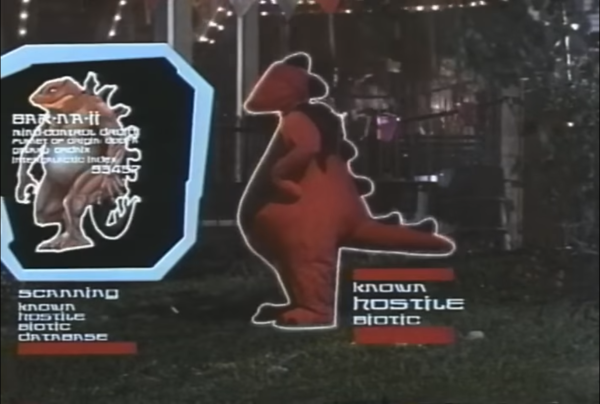 Once the alien antagonist aka Broodwarrior shows up, the movie falls into a whole different set of tropes as Spencer becomes the reluctant hero. He initially abandons the suit to leave it to its own devices despite it not being able to move on its own. But of course, it doesn’t take too long for him to realize the error of his ways and comes back to save the suit and save the day. Not only that, but he ends up making amends with the bully because of reasons and they ultimately become friends. Not only that, but part of the way that he makes amends with the bully is by actually dodging a punch from the bully and returning one of his own, apparently through the magic of muscle memory by way of spending time in the combat ready cyber suit.

While everything isn’t all bad in this movie, there is a nice rapport between Spencer and the suit. Not only that, but the special effects for the suit and the Broodwarrior actually look pretty decent considering it’s coming from a low rent kids fantasy movie. The cybersuit itself isn’t anything too special, though Spencer’s point of view from inside the suit is actually quite interesting where we see the backwards version of the suit’s face that moves like a rubber puppet face as they speak to each other. The Broodwarrior is also quite good looking, full of spikes and other elements that it pulls off of itself to become flying spider drones or weapons via not-so-great CGI morphs. The humor is very 90’s kids movie, but it is fun here and there. The biggest action scenes are a mistaken one during the stalking scene at the amusement park where the suit accidentally fires its cannon at the ferris wheel, knocking the three girls out of the air only to also catch them. Thus saving them from himself basically. The other action scene is at the end where there’s the big confrontation at the junkyard between the cybersuit and the Broodwarrior that ends in a finale in a car crusher.

Overall, the movie had some decently fun moments throughout, it felt very much like a kids movie. There was a lot of wish fulfillment and 90’s era childish comedy, though looking at it now, the wish fulfillment felt very mean spirited and vindictive. The characters were mostly very shallow, the story took forever to really take shape and once it did, there wasn’t really a satisfying resolution. It has a mostly happy ending though Spencer and his teacher’s houses were both still totally trashed at the end of the day. It wasn’t a horrible ordeal to sit through, but there wasn’t really much to grasp onto either. Until next time, this has been Bubbawheat for Flights, Tights, and Movie Nights.

Posted on May 20, 2019, in 90's movies and tagged film, movies, review, Superhero. Bookmark the permalink. Leave a comment.

← Batman Unmasked: The Psychology of The Dark Knight
Rendel →