I had heard a little bit about this film and always had in the back of my mind that it was based on a comic book but for some reason it hadn’t made it to my master list before now. But this month I was granted a new free trial of Netflix and went through all of their superhero and comic book offerings and came up with a list of eight films to try and watch during this month. For whatever reason, this was the first film that I decided to check out from that list, I guess I was in the mood for a cheesy sci-fi movie, and while I knew it was going to be somewhat of a sex romp, I was still a little surprised at how much nudity and sexuality came through in this film even though much of it was edited out during some theatrical releases of the film in the US. Barbarella originally started out as a comic strip in a French magazine before being collected in a series of graphic novels and eventually translated into English. It even ran in Heavy Metal magazine. As for the movie, it’s generally notable as it stars Jane Fonda but is basically a B-movie sci-fi film with a mix of sex and adventure. 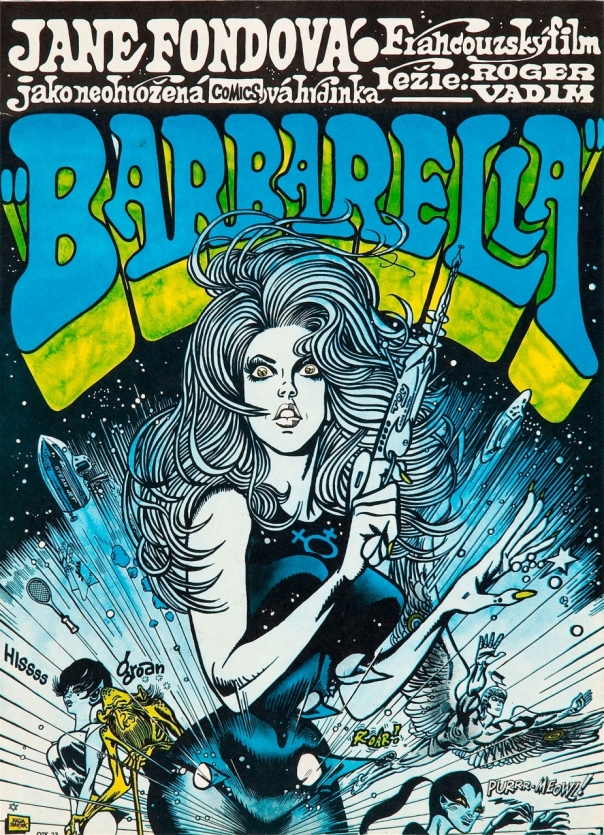 Since it’s based on what was originally a comic strip, it does have a very episodic feel to it, she goes on a handful of very loosely connected adventures that generally end with her being captured, tied up, and then rescued by someone that she has sex with as a reward. There is a loose, overarching plot where she is trying to find the scientist Durand Durand who has stolen a Positronic Ray which is currently the only weapon that exists from Earth, aside from a handful of weapons that the president gives Barbarella from their museum. But that plot mostly only comes up when she eventually asks most people she meets if they know of him until she just randomly realizes one of the villains actually is him when one of her sci-fi gadgets goes off near him.

Barbarella with her newfound weapons. Also, “hi” and “bye” have been replaced with “love”.

What the film does more or less get right is the sense of the world of their future. It mainly concerns Earth where they have lived centuries in complete peace, so much so that there is no police force or weapons of any kind, and sex has been replaced by taking a pill when someone is a mathematically perfect match, while the old fashioned way of sex is only done by those who can’t afford the pills or the compatibility testing. But once she leaves the area surrounding Earth for parts unknown, all that is basically thrown out the window, while Barbarella comes off as a very naive Earthling who succumbs to the ways of “old fashioned” sex.

While there are never any explicit sex scenes, there is plenty of sensuality, starting off with the opening credits where Barbarella is performing essentially a zero gravity strip tease to get out of a very bubble wrap looking space suit. The zero gravity is quite obviously just her rolling around on the floor as she is filmed from above, though it was much more interesting and entertaining than the one at the beginning of Pamela Anderson’s Barb Wire. It’s also rather interesting to see Barbarella’s attitude about sex in general, when it’s requested as a reward for being saved from a group of kids and their remote controlled attack dolls, she treats it very nonchalantly. Like it’s nothing more than a simple handshake. It also is slightly reminiscent of Janet’s character progression in the Rocky Horror Picture Show where she starts off being completely naive about sex, but by the end of the film she literally breaks a machine designed to give her death by sex because she is too much for it to handle.

Another comparable movie to this is the cult classic Flash Gordon, which isn’t too surprising as it shares the connection of producer Dino De Laurentiis. Both films have a very serialized feel to them, and they both feature very lavish sets and costume design, though the sexual innuendo is much more flagrant in Barbarella, which is saying something. Barbarella herself has a half dozen different costumes, many of which involve a plastic breast cup, sometimes mostly see-through. And even when she is more covered up, she will often get captured and have that outfit get ripped up, either by chomping dolls or crazed parakeets. The birds scene was a treat to watch, since the birds are quite obviously extremely passive and tame parakeets. Most of the birds end up calmly perching on her legs and arms even while she is screaming in simulated pain while also not flailing so as not to hurt any of the dozens of birds flying around her. Barbarella’s spaceship itself is a glorious testament to the late 60’s early 70’s idea of the future as it is upholstered top to bottom in glorious brown shag carpeting. One of the other random characters that she meets is a blind angel named Pygar who lacks the will to fly until Barbarella gives him a little bit of her sexual healing. He is another character who more or less shares Barbarella’s innocence and naivety, which comes into play during the ending of the film. 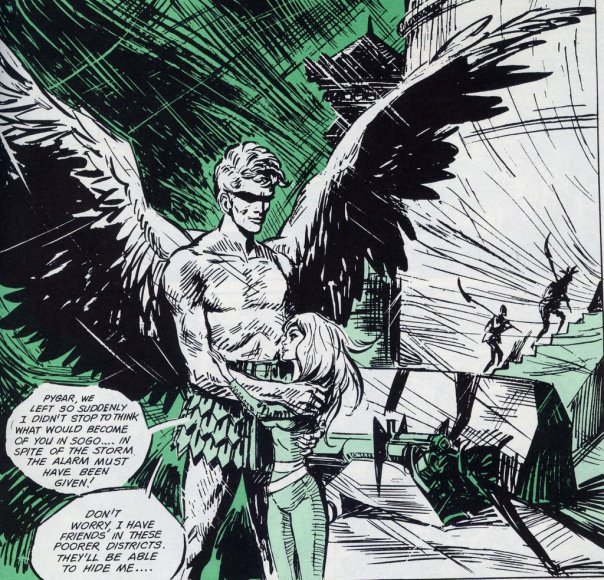 A panel with Pygar from the comics, though in the film he isn’t wearing the blindfold.

It’s a little odd to take a look back at this film, it does feature a supposedly strong female character in the lead role, but when you really look closely at it, she very much takes a passive role in every single plot point. She is captured several times and has to rely on other men to rescue her. She does have a couple moments of heroism involving Pygar when they are flying and she is taking out the ships coming to attack them, but when she tries to rescue him from the Black Queen using a bluff, she is quickly defeated. She basically stumbles around and lucks into saving the day through her innocence as the liquid alien force that powers the entire City of Night is unable to devour her since she doesn’t have any evil thoughts. It’s not exactly one of those so-bad-it’s-good films, but it is very much a cult film due to the sheer amount of bizarre plot elements that happen throughout the film, similar to Flash Gordon or Buckaroo Bonzai. Where else are you going to see a pair of people have future sex where  they each take a pill and hold their hands together until their hair curls and their hand smokes? Or that she is given an invisible key that opens an invisible door, and the key is actually fully invisible, not movie-invisible. It’s weird, it’s bizarre, but it’s also quite a bit of fun. It also helps that Jane Fonda as Barbarella is quite attractive in the role in all her wide eyed naivety. Well worth looking up on Netflix. Until next time, this has been Bubbawheat for Flights, Tights, and Movie Nights.