I’m continuing my two pronged attack of watching horror movies based on graphic novels as well as movies from 2010 with yet another film that for some reason wasn’t on my list. When this movie first came out, it came and went without me hearing very much about it one way or the other aside from a very vague idea that it was a pretty bad film and that it starred Brandon Routh, one time Superman. The film surpringsly reminded me quite a bit of Constantine and the more I looked into it, the more similarities popped up at me. Like Constantine, Dylan Dog was based on a comic book about a supernatural investigator who wasn’t really supernatural himself. The film changed several aspects of the comic including moving the locale from London to New Orleans, changing the sidekick significantly, and changing the darker tone and social commentary to more of an action mystery. They both even have Peter Stormare in a small role as well as a character named Gabriel. On the downside, Constantine is a much more visually stylistic film while this film tries to fall on the comedic noir side of things which is an incredibly odd choice and doesn’t even manage to do that very well. And it’s a shame because it is directed by Kevin Munroe who did a great job on the 2007 animated TMNT.

Dylan Dog jumps into the story where he has already given up his profession as supernatural mediator more or less. Instead of giving us an origin story, it has him years or possibly just months after giving up that role and becoming much more of a traditional private detective who generally just takes pictures of infidelity. It’s not until a random murder of a rich, old, white guy by a werewolf followed shortly by the murder of his sidekick that brings him back into the game. In the world of Dylan Dog there are basically three varieties of supernatural: The vampires who are also referred to as Truebloods, the werewolves, and the zombies. And apparently New Orleans is absolutely crawling with them, but there’s still the trope that the undead have to keep their presence a secret from the rest of the world, despite the fact that there are enough zombies in the city to have a bustling “chop shop” dedicated to replacing rotting limbs, and zombie-specific restaurants and supply depots. And the zombies also generally don’t have any way to hide their rotting appearance and smell the way that the vampires and werewolves do. 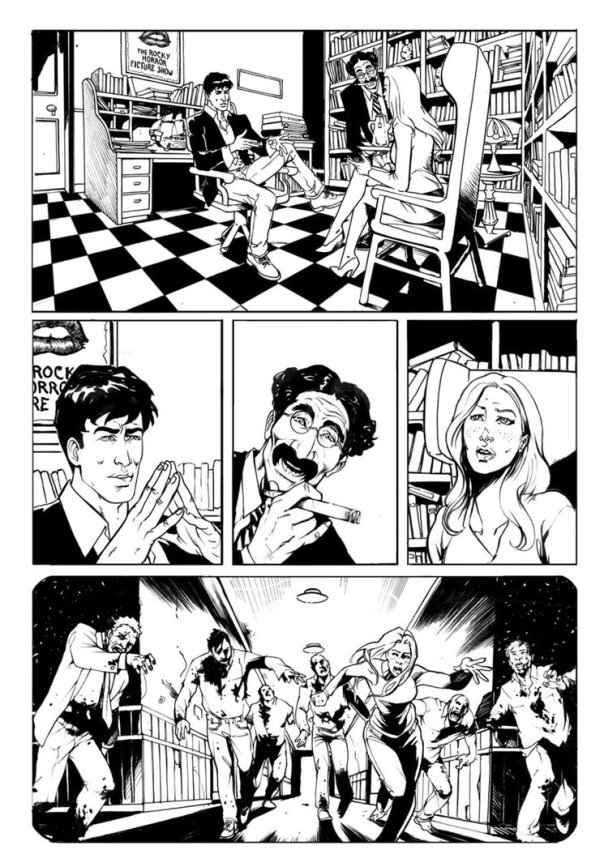 From the original comic with his slightly insane partner Groucho.

Like many of these types of movies, there is an audience surrogate by way of the daughter of the murdered old man, i.e. someone for Dylan to explain the world of the movie to. But if that weren’t enough, it also brings his murdered sidekick back to life as a zombie a little less than halfway through the movie so he can have yet another audience surrogate to further explain the rules of the undead. His sidekick is played by Sam Huntington who was also his sidekick of sorts when Routh played Superman and Huntington played Jimmie Olsen. In this film, he plays a mix of Olsen and Shia Lebeouf’s Chas from Constantine. They even wear practically the same type of outfit with that silly cap no one in their right mind actually wears in real life outside of 1920’s newsboys. And if that sort of exposition wasn’t enough, there’s also plenty of noir-esque narration from Routh to fill in any more details that they may have left out. The only problem is, Routh doesn’t really have the type of voice that benefits that style of narration. Instead of giving it a noir feel, it’s much more dry and ultimately boring.

One of the few smartly framed moments.

On top of the entire undead world that the film is introducing, there’s also this overarching mystery surrounding the death at the beginning of the movie and this mysterious missing artifact called the Heart of Belial. The biggest problem is that the mystery is not the type of mystery that the audience can solve. It’s the type of mystery where Dylan basically bounces from plot device to plot device where he is told point blank the next piece of the puzzle, then when he thinks he has all the pieces, the film throws in a twist that turns everything he knows upside down. There’s a relationship between a vampire and a werewolf, he visits a random friendly vampire who just straight up tells him and the audience everything they need to know at that point, and it’s all followed by two twists slash betrayals that essentially come out of nowhere. There’s Taye Diggs playing the hipster vampire lord who came into power after Dylan’s fiancee was killed. Her death was the inciting event that led to Dylan giving up his supernatural practice and Diggs also reveals that he was the one behind it in order to play Dylan get rid of the vampire elders at the time. Not only that, but it’s also revealed at the very end that the girl that hired him comes from a long line of monster hunters as was the one who wanted to release this world destroying demon Belial so that he can destroy all the undead for her. And since the movie had been building up this “relationship” between her and Dylan, the expected move would be for her or Dylan to realize her mistake and force one of them to kill her, since killing the one who resurrected Belial is the only way to contain him. But even that isn’t done, instead she is just killed by what feels like a random pack of werewolves even though they were technically connected to everything.

I mean, you can’t mistake the similarity as accidental.

There’s just so many things this film does wrong that it’s hard to cope with it all. And the worst part is that it’s not an awful movie. The acting for the most part is pretty flat, especially from Routh, the girl whose character and actress name are unmemorable and not even worth looking up, and Diggs. Sam Huntington’s role is a little fun as he has to cope with being the undead, but not one of the cool undead, just one who is hard to kill. He fills the role that’s a mix between the complete comic relief of movie Constantine’s Chas with the durability of TV Constantine’s Chas. The special effects weren’t anything to write home about either. The look of the werewolves felt much closer to the 80’s Teen Wolf than anything done past 2000. There were hints of interesting cinematography here and there, but overall the film was just uninteresting. Until next time, this has been Bubbawheat for Flights, Tights, and Movie Nights.