It’s time for another entry in the DC Animated canon and they are continuing their fairly recent connected universe of films that tie together Batman and Robin with the Justice League movies aside from Gods and Monsters. This film follows the recent trend of naming superhero films based on having the heroes fight each other. At least this time there’s an element of mind control rather than a difference in ideology. As for my own experience with the Teen Titans themselves, I’ve seen a few episodes of Teen Titans, plenty of Teen Titans Go, but I’ve only seen the Blue Beetle in a single episode of Batman: Brave and the Bold. It felt like an odd fit considering that in the universe of this story, the Justice League is still quite young but the Teen Titans is already established. Though it does seem to be even newer than the Justice League. But aside from the specifics, this is a much better tone than the live action DC Universe and aside from a few minor nitpicks, I enjoyed the hell out of this one.

While this movie is called Justice League vs. Teen Titans, it’s really much more about the relationship between Raven and Damian Wayne. While the timelines are a little different here, this version of the Teen Titans consists of: an older Starfire as their leader, and that’s older as in early twenties, Beast Boy, the Blue Beetle as Jaime Reyes, and Raven. After yet another disagreement with Batman and a complaint at being left out of a Justice League battle with the Legion of Doom, Robin gets shuffled off to the Teen Titans where he will essentially be an equal rather than a sidekick. There’s some hard knocks at first, but a kinship arises with Raven as her demon father Trigon begins possessing members of the Justice League so he can destroy the Earth. 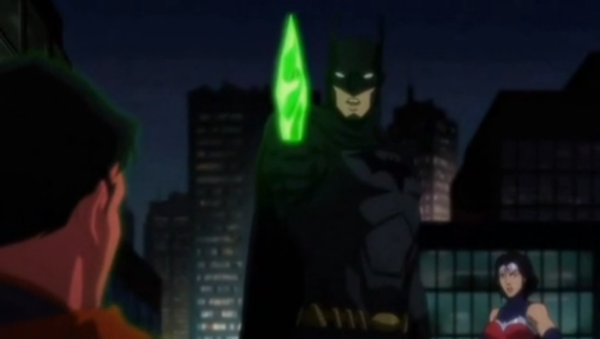 A sense of fun was present throughout this film that was at times refreshing and all too familiar. It’s both formulaic but welcome after watching a much more serious version of two superheroes battling it out even if it sometimes falls for the trap of cutting the tension of a serious moment with a casual one-liner. Like when Damian stabs possessed Superman with a shard of Kryptonite, once freed Superman looks at the shard and gives a casual “would you mind?” to Damian. There were moments where it took the fun a little bit too far which made things feel just a little too odd considering the circumstances surrounding a demon lord possessing people and heroes on its way to destroy the Earth. It never really seems appropriate even for the Teen Titans to have a carnival montage to a generic poppy rock song. There was also an odd moment where Starfire and Dick Grayson are talking via video chat. The perspective is from Starfire’s angle, but there’s also a picture in picture with Grayson’s view of Starfire and it felt like a weirdly gratuitous cleavage shot, especially when Grayson’s tone started heading towards a frisky attitude before getting sidelined.

What worked the most was the pairing between Raven and Damian, they are both rather brooding characters with a dark past, though Raven wins on that front hands down. She also gets to show that she has the potential to be the most powerful member of the Justice League hands down if she wanted to be. It was also nice that their relationship wasn’t something that devolved into a typical romance, instead it was more of a deep kinship where they had something that each of them could relate to without ever having to quantify it. It was also fun to see the nods to Cyborg having been a member of the Teen Titans in other incarnations as he works with the team the most out of any other member of the Justice League, but when asked if he would be willing to return, he likens it to being in the big leagues and wanting to come back into the minors. He also brings the group pizza at the end which felt a whole lot like the Cyborg from Teen Titans Go. And while it was only a minor part of the overall story, there were a couple nice moments that continued the multiple movies thread of Superman and Wonder Woman’s relationship. It’s one of those things that’s generally unimportant in the grand scheme of things if you hadn’t seen either of the previous movies, but it’s something that helps tie these films together without making you feel like you’re missing out on something. 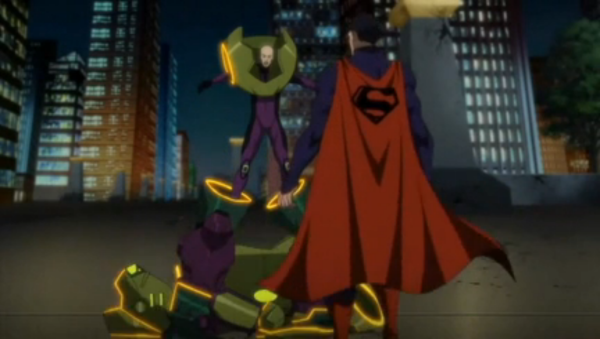 A fun moment in the beginning when Superman lasers off Lex’s power armor.

The designs on the demons and the fight scenes in generally were also quite entertaining. They lacked some of the finesse and kinetic nature that Jay Oliva tends to handle very well, but it was made up for with the variations of the demons and styles of fighting, especially the way that Beast Boy’s animal transformations looked and felt, especially when they became more demonic and fantasy based when the Teen Titans entered the Hell dimension. The voice cast brought everything that they always bring to the table, Taissa Farmiga did a great job with Raven, with a little less grumbling darkness to her voice and a little more softness and vulnerability. Brandon Soo Hoo also did a nice job at Beast Boy, bringing a little bit more maturity and less of a comidically high pitched voice seen most often in Teen Titans Go. It was great to see a different dynamic with the Teen Titans with Starfire in the lead role and Blue Beetle in place of Cyborg. It all fits together in different, but interesting ways and I enjoyed seeing it play out. I would also be interested in seeing further adventures of this version of the Teen Titans in the future to go along with the Justice League and Batman timelines. Especially since there are twice as many women on this team. Until next time, this has been Bubbawheat for Flights, Tights, and Movie Nights.