And now we come to the film that will likely wrap up this month of kids movies unless I happen to squeeze one more in tomorrow. I ran a Twitter poll of a few options to choose, and this was the movie that won. Now I am only slightly aware of Ben 10 as a concept, I know that it started out as a cartoon and has gone through various different series as well as a couple different live action movies and this was the latter of those, and probably not the best choice for an entry point into this universe. But surprisingly this was much less difficult to understand the overall basics of the world than the two Power Rangers films and that’s even including my past experience with the Power Rangers. Considering the fact that it was a made for TV movie, it was much better than I expected. There were some interesting concepts thrown around even though they were treated with kid gloves for the most part. What it did do the most was make me curious about the Ben 10 universe as a whole.

If you’re not familiar, Ben 10 is basically a kid who may or may not be part alien who is also able to morph into several different species of alien so he can fight other aliens and protect the world. It sounds confusing describing it this way but it makes more sense in the way that it’s presented in the movie. This is a world where there’s a group of alien hunters across the world who are referred to as plumbers. Ben himself is a teenager and he seems to have aged a bit across the different series and movies. He also has a couple other accomplices on his team that have their own alien abilities. Gwen has the ability to make her hand glow and do various things like scanning for alien stuff. And Kevin is essentially Absorbing Man where he can change the make up of parts of his body into whatever material he touches. There’s also Max who is the older mentor character who has been working with the plumbers for years and is guiding the kids through their adventures. And while there isn’t much explanation for some of these relationships or where their powers came from, there’s enough there to roll with it. 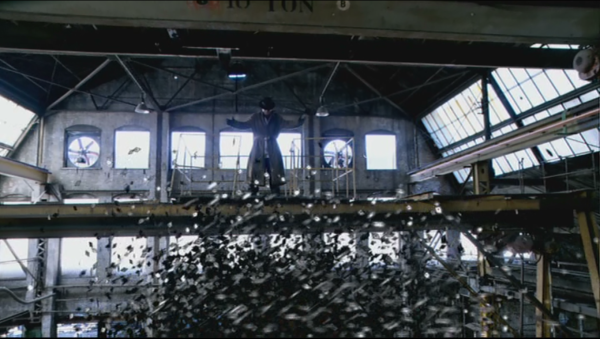 The swarm of alien nanobots

The main villain in this film is the combination of a couple different ones. There’s the early suspicion of the daughter of a former plumber… no, this terminology is just too weird, a former alien hunter who went rogue and she also happened to have a bunch of weird alien chips who act very much like the nanobots in Big Hero 6, though they aren’t able to form solid objects until near the end of the film, instead they just swarm around like a bunch of metal mosquitoes. There’s also a bit of an Invasion of the Body Snatchers vibe as we eventually learn that these alien mosquitoes are able to burrow into the skin of humans and control them under their hive mind. The only downside is that once the heroes learn about this they are seemingly unable to make the logic jump that the new girl’s dad who had been “kidnapped” was actually being controlled by these alien chips. Which is what they eventually find out, not only that but he’s the queen of the entire hive and the one that they need to defeat to save the world.

One of Ben’s alien transformations, the big brutish one.

Throughout the film, there are quite a few great ideas, but they aren’t always executed beyond what one might expect for a straight-to-TV movie. There’s the whole Invasion of the Body Snatchers concept, but it doesn’t end up working very well because the best part of that idea is that you are surrounded by people you know, but you don’t know who you can trust. In this movie, the majority of the infected are just random townsfolk. The only time one of the team becomes infected, they realize it right away and he just runs off. There’s also the alien transformations which are passable, but obviously on a television movie budget. What was surprising, but also felt a little out of place from someone who has no background with this property was the bit of vehicle porn. There were a couple nice motorcycles, a nice muscle car, and a gorgeous custom car revealed near the end along with some decent-but-TV-level stunts to go along with them.

The bizarre look for the queen who can create the chips from nothing apparently.

The biggest issue with this film were the various logic missteps throughout the film that made most of the characters seem like complete idiots. First off is the fact that the new girl in question sees her father right in the opening scene, but claims to not know who he was. Yes, he was wearing a hat and acting weird, but she could have at least said that the guy looked like her dad but was clearly not acting like her dad. There’s also the annoying bit about the traitor business where the reason her dad was kicked out of the alien hunters in the first place was because he was suspicious of these alien bugs that appeared to be completely inert to the hunters, but were actually just dormant. We get to see security footage that showed the grandpa did the equivalent of plugging is fingers in his ears and saying “la la la, I can’t hear you”. Even the alien bugs aren’t exempt from the logic holes, when they are attacking the kids, there appeared to be plenty of opportunities to just send a swarm at one of them so one can get through and control them. There could have been an explanation that they were immune due to their alien powers or something, but that wouldn’t include the one girl who was completely human. But even with those rather gaping logic holes, this wasn’t a bad watch, and was by far the best movie out of all of these kids films that I watched during the month. It’s tough for me to say whether or not a Ben 10 fan would enjoy this film, but as someone who has never seen Ben 10 before this, I thought it was interesting enough to make me more curious about the universe as a whole. Until next time, this has been Bubbawheat for Flights, Tights, and Movie Nights.