Something that I realized while watching this movie is that it’s actually a fairly common trend, especially for lower budget superhero films to present the actual superhero as someone with some type of mental break. Whether they are delusional in some way where they don’t entirely realize what’s going on, and often they are represented with an actual version of a psychotic break where they are seeing hallucinations and/or what they’re experience isn’t entirely real. This film is yet another one along those same trends and while I didn’t know it before I started watching it, I caught onto the thread very early on. It’s also interesting that it is a Chinese production, and yet it brought on Kevin Spacey and pushed him into essentially a lead role in front of the supposed main character. Like many of these superhero films with a delusional main character, the film becomes a mix of comedy and drama, though it doesn’t quite go into very dark territory that others tread into. It doesn’t do anything entirely new, but the leads are likable, especially Kevin Spacey and overall it’s a fun story. 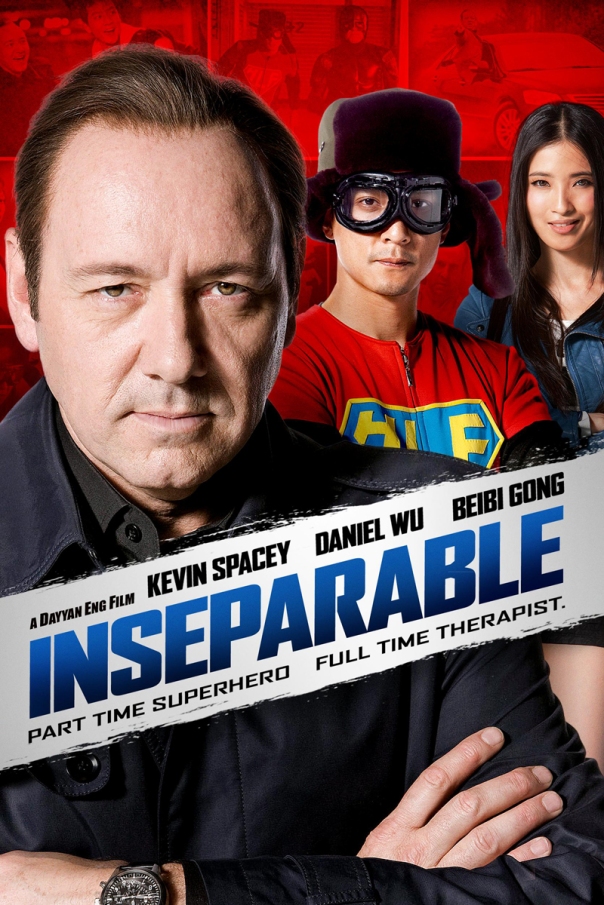 In some ways, Li is a typical Japanese office drone worker. Although his office is specifically working on a chipset that controls artificial limbs. When the film opens, we see that he’s about to commit suicide before being interrupted by Kevin Spacey speaking very rough Chinese before realizing that he can switch to English. What follows is the film following Li down this early mid-life crisis that we eventually find out was caused by a couple pretty traumatic events happening right in a row. But what this film does fairly well is the slow distribution of information that never ends up feeling like exposition. There are plenty of issues in Li’s life, several months ago his parents died in a car crash and shortly afterwards his wife suffered a miscarriage, and the resulting blowback has caused his marriage to suffer. Not only that, but at his job, he has found a glitch in the chip that in some cases could cause the artificial limb to snap, but his supervisor wants to keep this fact under wraps so that the company can sell their product and go public.

But as dire as Li’s life seems to be, because all of this information isn’t given to us in one big dump, it’s spread out over the course of half of the movie, so there are plenty of opportunities for the comedy to break through and to never feel sorry for Li for very long. Even though we’re introduced to him trying to hang himself from the ceiling, there somehow happens to be enough lighthearted comedy so that it doesn’t feel as dark as it could, especially with the slapstick way he ends up crashing to the ground. Spacey is also quite perfect for how he lightens everything up, even as Li eventually tries to send him away once Li realizes Spacey is a figment of his fractured mind, Spacey comes crashing through the door by ripping a hole in it with a chainsaw. And to help sell the unreality of it, the door is completely intact for the next shot. There’s also a nice moment when the film shows you that he’s finally starting to be ready to send Spacey away for good when he finally starts telling him to go away in Chinese rather than in English as he is used to speaking to him.

There are some great ways in which this film both foreshadows and deals with the hallucinogenic nature of Spacey’s character. Early on, whenever he meets Spacey there is no one else around. And when Li knocks on the door of the apartment Spacey was supposedly living in, someone else answers the door. There’s even a moment when Li introduces his wife to Spacey in front of his jerkish neighbor and the other neighbor starts to freak out like something is wrong. But that’s not only a sign that Spacey isn’t real, it’s also a sign that his wife at that time isn’t real. The fact that his wife is also a figment, but only at certain times is a much more difficult concept to pull off within a film, but Inseparable does a decent job. Not only at making it seem like nothing’s wrong, but also at hinting that there is something wrong. His wife tends to be very moody and spends days at a time away on assignments. Looking back on the film, during an early moment in the film she comes home unexpectedly and essentially pounces on Li with no explanation. But later on they have an argument when she gets home and has to clean up the apartment. There’s also a time when Li gets put in jail and she has to come to pick him up, there’s no real way for that to happen unless she was real in that instance. But the lines get blurred and it’s difficult to tell looking back at a single viewing how often she was real and how often she was imagined.

But besides all of this Fight Club-esque mental olympics, there is a superhero element that runs through this film. Once Spacey starts to get Li to lighten up, he continues to push it further into vigilanteism complete with a costume. They start small, like stopping a rich prick from tormenting a poor guy who scraped the side of his car with his bike. But it escalates into a near hostage situation where he confronts an American executive played by Peter Stormare who runs a vitamin company who replaced the folic acid in their prenatal vitamins with sugar and corn starch. The same vitamins which were directly responsible for his wife’s miscarriage, and the same company who his wife was doing investigative reporting on, but apparently never quite got enough information to nail them. But he and his imaginary friend do. They also end up exploding a stash of tofu that was illegally being infused with formaldehyde, but that ends up coming back to bite him when he attacks another street tofu vendor just for being a general jerk, but also mistakenly assumes that their tofu is also tainted, which is the inciting event that gets him arrested. There really is a lot to like within this film. From the characters to the overall concept, but it just doesn’t do anything in a very spectacular or surprising way. Which isn’t really a failure when you think about it, especially if you aren’t familiar with something similar beforehand. Until next time, this has been Bubbawheat for Flights, Tights, and Movie Nights.