It’s true that I don’t always go with the flow the way it was meant to be, though the last time I really remember doing this in terms of this site was way back during the first year when I watched the three Spider-Man films backwards so I could compare the original Spider-Man right against the reboot Amazing Spider-Man. This time is was mostly a case of laziness considering that I already owned Robocop 3 and it was sitting right in front of me even though I hadn’t seen Robocop 2 before. And I was completely right in thinking that it didn’t matter as the three movies have very little to do with each other in terms of continuity, they merely tell three different stories with several of the same characters. The original is important to have seen to set up the characters, but once you’ve got that, you’re gravy. This is also notable to have been directed by Ivan Kirshner who is most well known as the director of the Empire Strikes Back, widely considered to be the best Star Wars movie. The film itself falls somewhere between the ultra-violence and satire of the original and the pandering-to-the-audience comedy and low budget of the third. 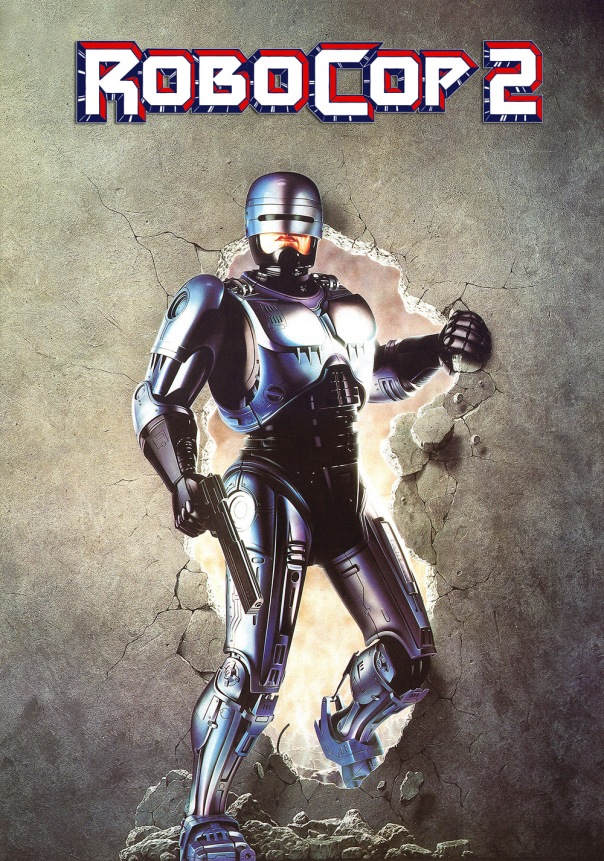 This time around Robocop is fighting the war on drugs and public opinion as Detroit itself is going bankrupt and a new, highly addictive drug called Nuke is hitting the streets. Nuke itself is set up as a total non-entity, it hits all the markers: it’s highly addictive, illegal, and at the center of a highly lucrative crime ring. Though the movie is very unclear over the actual effects of the drug or the dangers. Everyone in the movie who is shown taking the drug doesn’t appear to get high, they mainly take it to negate the symptoms of withdrawal. There’s also not any reports of overdoses or negative side effects even though there are a handful of news reports interwoven throughout the first half of the film, then disappear entirely. The opposite of what they did with the third movie.

What this sequel did do was amp up the comedy without any of the social commentary. For the villains, we get a random cult-leader-esque head of the drug ring with a thirteen year old as his highest ranking lieutenant. And when the leader gets captured and forced into a robot body that they literally refer to as “Robocop 2”, the kid takes over as head of the criminal organization. Not only that, but he has the gall to offer a cash bailout to the Mayor of Detroit to pay off their multi-million dollar debt to OCP so that the corporation doesn’t foreclose on literally the entire city, even though that’s not quite how that would work. On top of that, Robocop gets damaged beyond the capabilities of the Detroit office to repair him and must be repaired by OCP who take that opportunity to adjust his directives via committee. So we’re treated to a series of scenes where Robocop is brainwashed to act like an after school special while he and his old partner get called out to take care of a highly violent little league team, has a different set of kids spraypaint “kik me” on his back, and finally electrocutes himself by grabbing hold of a massive transformer as his only resort to clear his programming. There’s also a moment where he falls prone in the middle of the street and a couple motorcyclists run over him, essentially ramping over his crotch. It’s a very different style of humor than was used in the first one, this humor is much more juvenile and if there’s any commentary to be made with it, the commentary is more likely about itself, especially in a prophetic way where Robocop eventually becomes more of a kid-friendly property than the almost X-rated film that the first two were.

But as much as the comedy of the film didn’t exactly hit where it could have, it was only a small amount of the overall film. The rest played out as a typical action film with a few of the subtexts from the original movie. We get moments of Robocop struggling between his identity as the remains of Alex Murphy versus a machine and the property of Omni Consumer Products. He has been stalking his widow lately before getting a mini-brainwash session to rid her from his life where he is reminded once again that he is no longer Alex Murphy, but Robocop. And just like in the first movie, he ultimately regains his independence as Alex Murphy. Another retread of the original film comes in the form of the Robocop 2. A larger, stronger model with more firepower, only this time it has the brain of a psychopath. Specifically the previous drug kingpin from the Nuke ring.

Even though there are a lot of missteps throughout this film, one of them is not the special effects. There is one moment where Robocop is dismantled and missing his visor and his parts are all convulsing which looks pretty spectacular considering its age. It does fall back onto the stop motion style of ED-209 for the villainous Robocop 2, but there are many more moving parts that look quite good. The only downside is the very 1990 era CGI face they use on a screen to show the personality of the villain within the robot body even though for some reason they decide to not let him ever speak. Possibly because they didn’t want to attempt to do a lip synch with their rudimentary CGI face. There was also a poor looking moment when the two robots were falling from the top of the OCP tower, though it didn’t look nearly as bad as the jetpack scene that would later show up in the third movie. All in all, it was a pretty big drop from the classic original, but it wasn’t nearly as big of a drop as it would be for the third entry in the series. Until next time, this has been Bubbawheat for Flights, Tights, and Movie Nights.