← Officer Downe
Valerian and the City of a Thousand Planets →

There’s still plenty of times when I have to make the distinction on what exactly I consider to be a “comic book movie”. This is a horror movie that’s not specifically based on a comic book. From what I little information I can gather, the concept for the film likely came first, but before production was able to begin, the director took the concept and turned it into a comic book that took place before the events of the movie. A few years later, the film was able to be completed, but in most places, the comic book is referred to as a prequel to the film instead of vice versa. But considering that the comic book was published first I’m going to give this the benefit of the doubt and include it in my list. As for the actual movie itself, it’s a decent mystery that builds into a haunted house style movie with a bit of a twist at the end. The mystery has a good build up and the visual style is excellent, but the characters left me a little bit wanting. 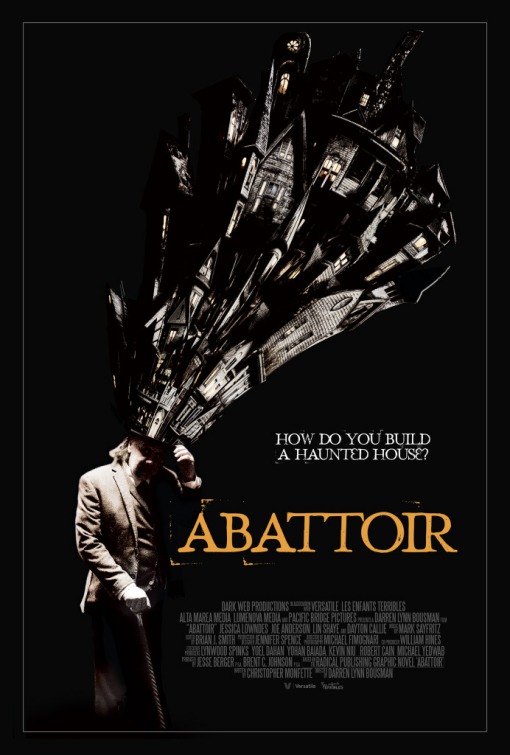 The basics of this film is that there’s a series of murders and deaths that are shortly followed by the purchase of the building that the gruesome event took place in. The buyer pays above market value then almost immediately sells at a loss after having removed the room containing the deaths from floor to ceiling. The mystery comes about due to reporter named Julie who is stuck writing about real estate deals but wants to write about crime and just so happens to end up in the center of this mystery when her older sister, her sister’s husband, and their young child are murdered and the room removed. She follows her leads to a small town that she also happened to be born in called New English and discovers that the mystery runs much deeper than just some crazy guy collecting murder rooms. 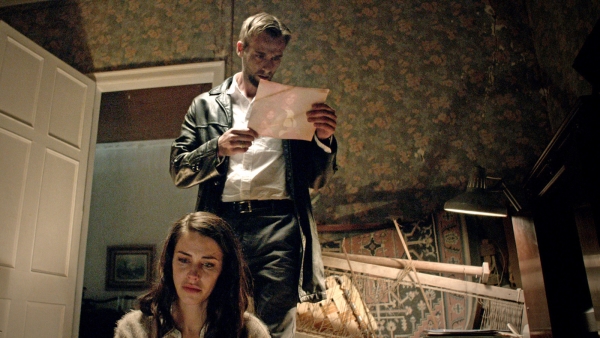 The first half of the film focuses on the mystery aspect with Julie following the leads in a very Lois Lane sort of way where she defies her editor-in-chief and yet has a very loose thread as the mystery revolves around real estate so she has a valid excuse to investigate via her job. She also has a police detective boyfriend who they both try and deny to each other that they are actually dating. The mystery starts off on the dry side until they actually get to New English itself and it turns into one of those mysteries where the entire town is hiding something and are trying to run the protagonist out of town. There’s a great little creepy vibe coming off of all the townspeople and the escalation builds well especially with the flash of several of the townspeople during the initial murder of Julie’s sister standing just outside the room in the hallway.

One of the bigger problems of the film is the protagonist herself. Julie is a standard Lois Lane type where she doesn’t take no for an answer and keeps pushing until she gets the answers she wants. But at the same time, she just so happens to find herself neck deep in trouble that she can’t get out of by herself. We get a little bit of a back story to her about how she was an orphan, but that doesn’t really add to her personality, it’s just presented as a fact and used to connect her to the town of New English. Her pseudo-boyfriend cop isn’t much in the way of personality either. He’s the typical gung-ho officer who mainly just wants to keep Julie safe while trying to convince her to follow the rules and give up this weird story. 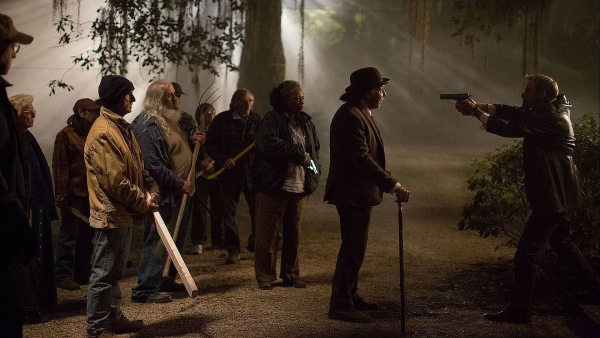 When the film gets to the third act, it shifts gears. When Julie finally gets to the heart of the town where the rooms are kept, some scattered around in the forest and the rest put together in a giant, patchwork, murder house of the damned, it turns into a haunted house story. We’re led through the haunted house by the creepy guy they have been after from the start, Jebediah Crone as he pounds his cane on the floor to awaken the ghosts to relive their deaths over and over again. This is where the film gets a little bit better, though there’s not enough meat in this story to grasp onto. The visuals are decent, at least the way the rooms are shot and lit. Even the editing techniques help give a nice bit of disorientation to show that something’s not quite right. And there’s even a nice touch with the cracks in the house to help sell the fact that they’re supposedly closer to the hell dimension or something like that. While the visuals are nice, the rest of it is harder to make sense of, and it ends without a clear cut conclusion. There’s a nice unexpected twist, but it’s not enough to close the many open threads left throughout the mysteries of this murder house and the town that surrounds it.

Abattoir has a fascinating mystery at its core, but it struggles to walk the right side of the line between giving the viewer too much information and not enough information. There are several threads that are revealed well as we learn more about Julie and her connections to the town, but other threads are hinted at without any satisfying conclusion like the fate of Julie’s young nephew or even really the killer of Julie’s family and his connection to the town. There’s a supernatural element that’s brought up, but then it ends with the conclusion of Julie’s story but leaves way too many questions about the house itself. It shows some promise, and if there is a sequel I would still be interested in seeing where this character goes from here, but for now Abattoir is a worthwhile distraction on Netflix, but not a movie worth seeking out otherwise. Until next time, this has been Bubbawheat for Flights, Tights, and Movie Nights.

← Officer Downe
Valerian and the City of a Thousand Planets →