This is the latest DC Animation home video release coming May 7th. I’ve been a fan of every one of these movies that I’ve seen and I’m still dying to get around to the handful I haven’t seen yet. This one continues their run of quality releases following the Dark Knight Returns, though it didn’t quite win me over as much as that one did. This follows Superman and his cousin Kara and their struggle with the Brain Interactive Construct that’s going through collecting the information of the universe as well as cities he keeps as souvenirs including Krypton’s capital city of Kandor, and now he has his sights set on Earth. Superman is the only one that can save the planet and he needs the help of his cousin. The quality of animation and voicework were spot on as usual, but there was just something in it that just wasn’t quite the story I was interested in. 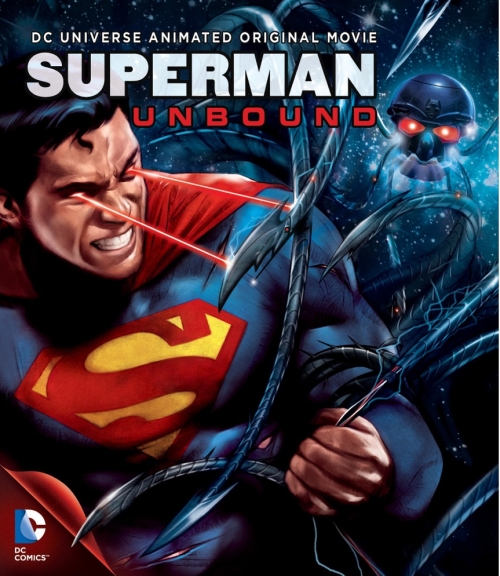 There is one thing I’ve noticed about a lot of these movies, especially the different Superman movies, and that is that the designs of the characters are so different from movie to movie. I know that every comic book artist has their own style and brings something different to the table, but for whatever reason I feel like these DC Animation movies are all connected more closely than that. Probably because even though they do have different character designs, they still have the same Bruce Timm look to them that nearly every DC animation has had since Batman: The Animated series. But this Superman, and especially this Lois Lane look so completely different than the designs used in All Star Superman which I watched not too long ago. It’s also a little weird due to the inconsistencies in what’s going on, which again is the same problem in the comics. But in All Star Superman, he reveals to Lois that Clark is Superman for the first time and in this movie, they’ve been secretly dating for over a year. It does get the information out quickly and painlessly, but it is a moment that bugs me temporarily.

One thing I did like about this movie is that it’s the first one I’ve had the chance to see that featured Kara, aka Supergirl. She was actually quite an interesting character here, she was older than Kal-El, but due to how they got there (something about a wormhole somewhere), she is currently younger than Superman but with his powers. But she still has his same morals, just a little less humanity. One of the random thugs in the beginning spells it out pretty plainly “The skirt’s the bad cop?!” But when it comes to the Braniac probe that crashes to Earth, she quickly reverts back to the scared little girl she was on Kandor when Brainiac took the entire city away from her. I think that Kara’s arc was the more interesting one even though she didn’t get a whole lot of screen time. I especially liked the brief interaction between her and Martha Kent and the mention of her secret identity wearing a brown wig and glasses. I think Lois Lane also suffered from the interesting, but underutilized female role in this movie. She is ready to take the relationship between her and Clark to the next level, but Clark is the one too scared to come out with it publicly. As another random little sidenote that bugged me, I never understood why they gave her violet eyes.

I loved this moment though.

But the heart of this movie is really the battle between Brainiac and Superman. Brainiac in this movie is a robotic organism that exists to catalogue all the information of the universe. But instead of merely doing that, his programming decided that he needs to be the sole source of that information and any additional sources are redundant, so they are destroyed after they have been recorded and collected. He has found a way to miniaturize entire cities which he keeps in an analogue of the solar systems placemarking the planets that have since been destroyed. He is the entire ship and directly commands an army of android drones. Brainiac is presented as an unstoppable force, though his androids are pretty easily dispatched by Superman. There is a lot of dialog between Brainiac and Superman about the differences between Brainiac’s ultimate knowledge and strength of a thousand planets vs. Superman’s pitifully primitive planet and weak emotional attachment to it. I also wasn’t a huge fan of how he ultimately defeated Brainiac, in a vaguely similar method as used in War of the Worlds.

As always, the voice acting here is great. I thought it was interesting to hear Deidrich Bader as Steve Lombard, the rival almost Anchorman-ish reporter. He reminded me both of the character I remember him from on the Drew Carey Show as well as the fact that he played the voice of Batman in Brave and the Bold. Aside from that, I did enjoy both Lois and Kara’s performances and I though both Superman and Brainiac were passable. The animation as always is excellent, and for some reason I was still a little surprised at the occasional scenes of blood. Nothing gory, but it’s still a little shocking to see in a Superman movie. It’s another great release from DC animation, and while I had a few issues with it I still enjoyed watching it and I imagine you will too. Until next time, this has been Bubbawheat for Flights, Tights, and Movie Nights.